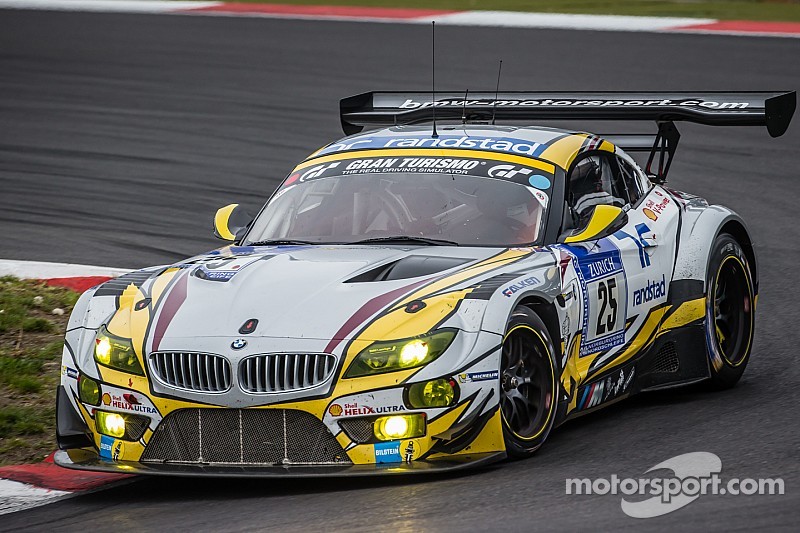 The 2015 edition of the 24 Hours of Nürburgring was one of the most dramatic in the race’s history.

The 2015 edition was one of the most dramatic in the race’s history, with the finishing margin – 40.729 seconds – the closest ever. The race was up in the air right until the final lap, with the #25 battling stint-by-stint with the #28 Audi. Each pitstop, the lead would change, and the huge crowd – both on track, and around the globe – were enthralled by a sensational battle.

I know second is not the result we wanted but it’s a very tough field and we competed right at the very front of it.

The race was excellent from the beginning. The pole-sitting #26 diced for the lead as part of a BMW 1-2-3 in the early laps, before a rain shower disrupted proceedings and ensured that a pattern was difficult to discern for a large part of the distance.

After a choice of tyres that proved to be the wrong one during the rain shower, #25 was forced to fight back from outside the top 20. It was during the night that the car made spectacular gains on the leading cars, moving into a position to challenge for victory. In the end, though, they were just unable to overcome the strong challenge from Audi and ended second, having swapped the lead for more than eight hours.

#26 was in the thick of the lead battle until a fire in the pits overnight cost nearly ten minutes, and they were forced to play catch up for the remainder. Despite excellent pace – including the race’s fastest lap from Catsburg, an 8:18.690 – they fell just short of the podium.

Lucas Luhr, BMW Z4 GT3 #25: “The whole crew can be really, really proud. I know second is not the result we wanted but it’s a very tough field and we competed right at the very front of it. I’m really, really proud of the guys, they worked their tails off, and the same goes for the sister car. They were unlucky, because they were right up there, leading the race, and then fell back. It’s a great result, especially in such a strong field.”

Maxime Martin, BMW Z4 GT3 #25: “You always have to be happy to be on the podium, but really we were here to win. We couldn’t win this time, and came really close again. At the end we did a really good race, and got the maximum we could have got from it. The guys did a stunning job, we had a really clean race, and on our car I don’t think there was a single problem. We did our best and we can be proud of that. It’s fantastic to be a part of Marc van der Straten’s team, and for that team to be considered among the very best in Europe. I hope we continue to build on that.”

Markus Palttala, BMW Z4 GT3 #25: “If this isn’t the toughest, then this race is pretty close to the toughest race in the world, on a track that is the most demanding challenge in motor racing. To finish is great, to finish on the podium is awesome. The whole team did a tremendous job, but today the winner was a little quicker and they deserved the victory. It’s pretty amazing that the Marc VDS Racing Team is in four different high level categories fighting at the front, on one weekend, and I’m proud to be a part of that.”

Richard Westbrook, BMW Z4 GT3 #25: “That was a fantastic race with some great duels. You can obviously look for reasons why we narrowly missed out on the win, but on the whole we should be proud of the second place we achieved here. Appearing here with BMW, this magnificent team and fantastic team-mates was an awesome experience for me.”

Jörg Müller, BMW Z4 GT3 #26: “It’s a bit disappointing, but sometimes you just have bad luck. The crew did a fantastic job, and without the fire in the pits we would have been right in the fight for a podium. These things can happen in racing – I’ve done enough 24-hour races to know that! This is one of those that isn’t quite perfect. Considering how much time we lost, to finish fourth is quite an achievement.”

Sebastien Metz, Technical Director: “I am mixed with my emotions. On the one hand, we took a podium at the world’s most difficult race, but on the other we just missed out on the win again. What I can say for sure is that I’m massively proud of the Marc VDS Racing Team. Every single member of the team did a fantastic job, worked themselves into the ground, and I really wanted to be celebrating a victory with them. I’d also like to thank BMW Sports Trophy Team Schubert – they were quick to offer their help where they could, and that just shows that the spirit among the BMW Motorsport teams is excellent.”