Martin Ragginger on pole for 24 Hours of Dubai 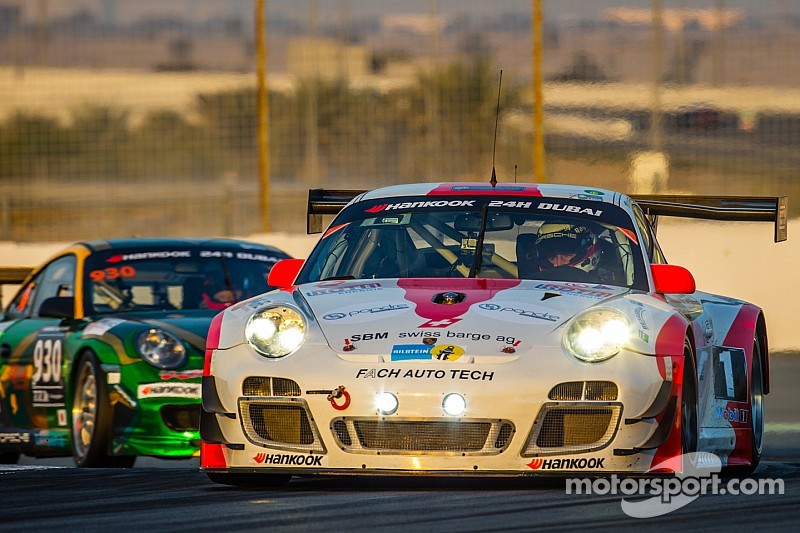 The lineup has been set for the 24 hour endurance race.

DUBAI (8 January, 2015) – With a lap time of 1:57.562 minutes, Austrian driver, Martin Ragginger, was fastest in qualifying for the tenth running of the Hankook 24H DUBAI. Thus, Ragginger put the FACH AUTO TECH Porsche 997 GT3 R (#12, Klohs/Ragginger/Richter/Müller) on pole position for the race.

The second row on the grid also has a Porsche lined up next to a Mercedes-Benz as Christian Engelhart ended up third fastest with the Porsche of last year’s winning team, Stadler Motorsport (#1, Ineichen/Ineichen/Amstutz/Engelhart), with German Thomas Jäger fourth in the RAM Racing Mercedes (#30, Arya/Jäger/Onslow-Cole/Christodoulou).

Martin Ragginger was quite pleased with his qualifying performance: “I drove many good laps, although none of them was entirely perfect,” the Austrian admitted. “Our car has been working very well throughout the event so far and the combination of our Porsche with the new Hankook tyres seems to be very effective. Of course, this is only half the job done, but being on pole position always is a nice feeling.” Porsche factory-backed junior driver Sven Müller is eagerly looking forward to his maiden 24-hour race: “I came on board with this team at a late stage, but I am really happy to be here!” Racing stalwart Otto Klohs commented: “With so many cars on the track, traffic is going to be an important issue, but we will definitely do our best to score a good result!” Jens Richter left no doubt about the team’s ambitions: “A podium finish certainly is our goal, and when we can be in the middle of the podium, it would be fantastic!” Ragginger’s fastest qualifying time means the fifth pole position for Porsche in history of the Hankook 24H DUBAI.

Pole position in the Porsche class went to the Black Falcon entry (#25, Schuring/Kaiser/Metzger/Raubach) thanks to a fastest time of 2:03.701 minutes, set by the 2011 VLN champion, Manuel Metzger. Only 0.005 seconds further down, French driver Alban Varutti put the GC Automobiles silhouette car (#150, Varutti/Pontais/Tiel/Amrouche) on pole in the SP2 class with a time of 2:03.706 minutes. Fastest SP3 car was the Optimum Motorsport Ginetta G50 (#163, Hankey/Yoluc/Ellis/Barwick) in the hands of Bradley Ellis with a time of 2:09.671 minutes.

BMW works driver Jörg Müller put the MPB Racing Team BMW M235i Cup (#74, Henkola/Kuhs/Henzel/Müller) on pole in the Cup 1 class with a time of 2:17.777 minutes. The A5 class also had a BMW on pole position with Bob Herber, who drove the JR Motorsport BMW E46 GTR (#77, Herber/Lanting/Gill/Jaffray) to a time of 2:11.684 minutes. UAE-based team Memac Ogilvy Duel Racing achieved local success by setting the fastest time in A3T with its SEAT Leon Supercopa (#95, Moutran/Moutran/Moutran/Quaife), driven by Phil Quaife to a time of 2:09.671. Another UAE-based team, Lap 57 Team, was fastest in class A2 with its Honda Integra Type-R (#57, Al Owais/Al Hammadi/Zuhour/Umemoto/Channake) thanks to a lap time of 2:20.836 minutes, achieved by Mohammed Al Owais.

On Friday, 9 January, there is a warm-up from 10.30 till 11.00 hrs. The race starts at 14.00 hrs and ends on Saturday, 10 January, at the same time, followed by the official prize-giving ceremony (all indicated times are local for the UAE, CET is three hours earlier). Motors TV is broadcasting the entire race live while there are also regular updates on Twitter (@24HSERIES) and Facebook (24H Series). More information about the Hankook 24H DUBAI and the other rounds of the 24H SERIES powered by Hankook can be found HERE.

Daytona escalator race? And no, we aren't making this up