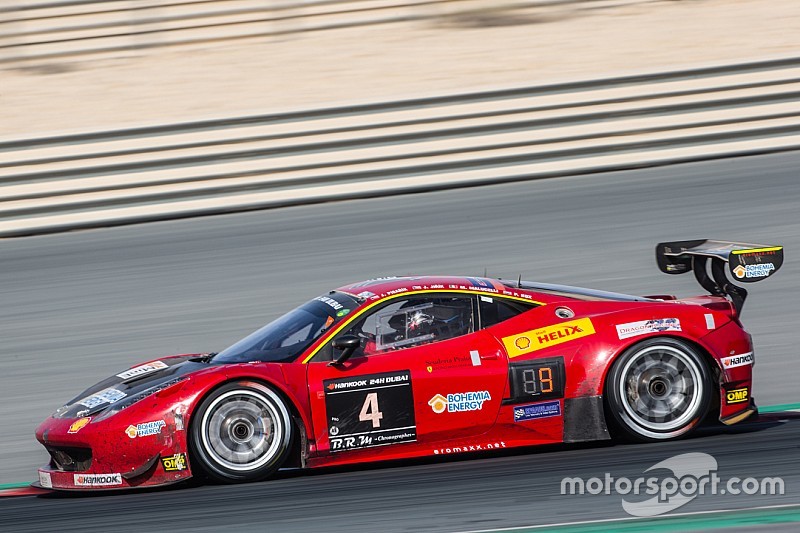 Malucelli’s fastest lap time of 2:00.918 minutes gave him an advantage of 0.397 seconds on German Thomas Jäger

BRNO – In a qualifying session that remained thrilling until the very end, Italian driver Matteo Malucelli secured success for Czech team Scuderia Praha as he put the team’s Ferrari 458 (#11, Jiri Pisarik/Jaromir Jirik/Matteo Malucelli/Peter Kox) on pole position for tomorrow’s Hankook 12H Epilog BRNO, the season finale of the 2015 24H Series powered by Hankook. Malucelli’s fastest lap time of 2:00.918 minutes gave him an advantage of 0.397 seconds on German Thomas Jäger, who qualified the Ram Racing entry (#30, Tom Onslow-Cole/Paul White/Thomas Jäger) as the fastest of the seven Mercedes-Benz SLS AMG GT3 cars in the field in second place.

Thick fog prevented any action during the first hour of the optional test session in the morning and even though visibility improved and allowed for some running later on, conditions remained challenging throughout the opening day of the Hankook 12H Epilog BRNO. Single-digit temperatures, a slight drizzle every now and then and the resulting damp track made it difficult for the drivers.

That led to several off-track excursions including one for the Senkyr Motorsport BMW Z4 (#32, Tomas Erdelyi/Robert Senkyr/Markus Palttala/Lennart Marioneck/Ralf Oeverhaus) that had topped the timing screens for a long time with a lap time of 2:01.793 minutes, set early in the session by Palttala. Earlier in the afternoon, Czech team Senkyr Motorsport also came out fastest in free practice, but after its mishap in qualifying, none of the drivers was able to improve Palttala’s time as the Mercedes-Benz and Ferrari drivers went faster. Thus, the BMW will be starting fifth on the grid.

Pole position in the SPX class logically goes to the Leipert Motorsport Lamborghini Huracan (#22, Isaac Tutumlu Lopez/Vadim Gitlin/Adrian Watt) as it is the only runner in this class. With a time of 2:03.552 minutes, Spanish driver of Kurdish origin, Isaac Tutumlu Lopez qualified the car in ninth place overall. Porsche Supercup and German Carrera Cup stalwart Christian Engelhart from Germany secured pole position in the 997-class with his MRS GT Racing entry (#20, Charles Putman/Charles Espenlaub/Christian Engelhart).