The weather and traffic dominate Bathurst

After coming so close in 2011 and falling foul of the weather after leading in 2012, Craig Lowndes and Warren Luff entered the 2013 Liqui-Moly Bathurst 12-Hour as one of the firm favourites. On paper they looked the goods, with support from Australian Audi Sport Customer Racing agent Melbourne Performance Centre [MPC], the car that won the 2012 event, and a co-driver with a 12-Hour winning pedigree.. all the pieces were there. 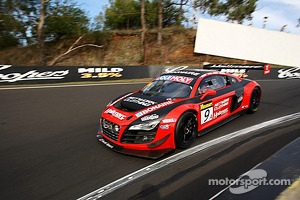 Joined by fellow Audi R8 LMS GT3 ultra pilots Mark Eddy and Marc Cini, Dean Grant and reigning 12-Hour winner Christopher Mies [D], they looked very much the benchmark team, but as Bathurst has done so many times in the past, you can never discount ‘the mountain’.

Quick throughout practice, the two MPC cars focused more on the long game, preferring to send out their car owners than circulate with their ‘pro’ drivers looking to break records.

Luff though was quick early, topping the second practice session, but admitted that the chances of completing a string of quick laps was going to be almost impossible in a field of more than 50 cars, with as much as 45-seconds separating one end of the field from the other.

“Traffic will be a big key in this race,” he admitted. “There are so many cars on the circuit, and such a big disparity between speeds that you’re really going to have to be patient.”

They would turn out to be prophetic words, with traffic - and in the end, weather - impacting the overall result.

By qualifying both teams were in the ball-park, but neither could match the pace of GT lap-record holder Allan Simonsen, although the youngest member of the team - Christopher Mies - felt he could have gone much faster.

“In the end, fifth was the best we could do, but I know I could have done a low six, and if the restriction on lap times [a 2:06 benchmark was set as the fastest lap time, anyone below that was handed a 50kg weight penalty for the race] wasn’t there, I think we also had a five in the car.”

Whilst Luff and Lowndes received two flying laps apiece, the bulk of the 90-minute qualifying session went to Salmon, although Luff’s flyer - which included an excursion into the grass on the exit of turn one - was enough to give them a sixth row start.

With renowned V8 Supercar strategist Ken Douglas wearing MPC colours too for the weekend, a variety of scenarios played out about the start of the race. In the end Rod Salmon and Dean Grant started their respective cars, and after double-stinting the crazy opening stanza of the race, they were comfortably within reach of the leaders.

The race hadn’t even gone long enough for the tyres to have gained much in temperature, when the first Safety Car came onto the circuit after impact between the Maranello Ferrari and a Class B Posrche. The subsequent clean up took a handful of laps, before a second incident occurred at the start of Conrod Straight on the restart, bringing to a close the opening round of the combined Australian GT Championship presented by Pirelli, and with it, a sixth placed finish towards Salmon’s championship aspirations.

“As we expected it’s been a very frantic start to the race, the back-markers have been the big issue so far, but as a fast car out there, you’ve got to be able to clear them,” Warren Luff said. “In the last incident we saw a back-marker remove two of the faster cars from the race on the run onto Conrod Straighht, but that’s part of this style of racing, you’ve got fast cars and you’ve got slow cars. As I’ve said all along, this race will be won by traffic management, not by outright speed.”

Salmon looked fresh and buoyant after his long opening stint. “Our strategy was not to run with the fast guys, we knew that they were going to go hard, but we knew there’d be an early Safety Car, and that’s what happened.

“I was getting quicker as I became more comfortable in the car, and in the end, when the team asked me to go a little quicker, I could find that speed, but I was still well within my comfort level.

The two MPC Audis had been running together for much of the stint. With Salmon working his way forward, and Grant dropping back a couple of paces, aided by an errant Maranello Ferrari.

“He clipped me after he spun,” Grant explained. “That gave me a left front puncture. It was a bit of a shame obviously, and we missed the Safety Car by one lap, so we went a lap down as a result.”

With Grant out, Cini climbed in for his maiden stint, but like his team-mate, his opening session ended prematurely after a hit from another competitor in the Dipper which forced him to pit head of time for repairs.

“We put Christopher in the car then to assess it rather than Mark Eddy, as was originally scheduled, just to make sure everything is okay.”

From Mies immediate pace it was clear the Audi was still strong, the two-time Bathurst winner charging back into the top ten before handing over mid-race to Mark Eddy.

“You’ve got to get to the end, but unfortunately there’s been a lot of Safety Cars, probably more than we’ve ever had in the past,” Eddy suggested. “The size of the field mixed with the huge speed difference between cars has made it a tough day. Towards the later stages in the day it was getting pretty warm in the car which makes you a bit more fatigued - its been a tough day at the office for a lot of people.

“We’ve had some dramas with the car, but that happens in a 12-Hour, but it’s still going. I think to the credit of how good the car is, it’s had a couple of big hits, yet it’s still quite drivable.”

That wasn’t the end to the dramas for the #9 car, with Grant copping a big hit from the race leading Clearwater Ferrari in the closing stages on the run into the final corner.

“The boys told me afterwards it was the race leader, that’s incredible, he dove in from way back and went well past the brake marker. I spun and tried to restart, but it went into limp mode, so I had to shut it down and reset the system.”

After that the job was down to Mies to make up the lost ground, and the young German showed exactly why he is on Audi’s payroll as a hired-gun.

He didn’t have it easy though, as with his return to the car came an aggressive weather pattern which the weather bureau suggested included heavy hail. Fortunately the hail didn’t come, but the heavy rain certainly added to the degree of difficulty, as did the opening downpour, which disappeared almost as quickly as it came.

“I honestly have to say, I was waiting for the rain, because we had our rain tyres on - I think one hour and 45 minutes, even when it was dry, so every lap I crossed the start-finish line, I just hoped ‘let it rain, let it rain’,” Mies explained afterwards.

“Unfortunately the rain came 20 minutes too late, but fifth is good, we ended where we started. All of the boys did a fantastic job. We had some issues.

We lost first gear and our pit limiter, and we had contact with cars and walls, so for that I think we can be happy.”

Watching the young German battle in the closing stages with DTM ace Bernd Schneider in the slippery conditions was one of the highlights, as was his pace in the challenging conditions, his fifth placed finish earning him the respect of his team, and an invite back for 2014. “We’ve already sent the invitation,” Cini admitted with a grin post-race.

Whilst the Network Clothing/Hallmarc R8 LMS ultra managed to salvage a solid run from a difficult day, across in the Skwirk.com.au pit, things weren’t quite so buoyant. 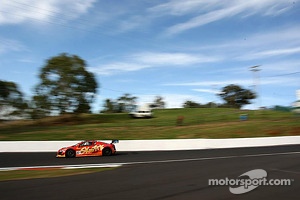 After Warren Luff returned the car to the lead lap and battled with the Maranello Ferrari and the two Erebus Mercedes, he turned the car back over to Salmon, who unfortunately made contact with the wall on the exit of the Dipper late in his final session.

“I wasn’t 100% by that stage,” he admitted afterwards. “I was starting to get fatigued. The cool suit had failed, the air hose had come off my helmet and the drinking fluid was hot. I radioed the boys a couple of laps before the hit saying I was struggling with the heat, but we were working to a strategy, and it was working well.

“I knew I wasn’t hitting all my markers like I was in that opening double stint, but I hung on. It wasn’t a big hit, but I came straight into the pits afterwards. The team replaced a control arm, and sent Craig out, but fairly early in his session a bigger problem developed,”

“I went across Skyline and into the Esses and the car snapped around on me and put me into the fence,” Lowndes confirmed. “It appears to have broken the left rear upright or a link, and that caused the spin, which subsequently put the other side into the wall and broke that upright as well.

“It wasn’t that big an impact to be honest. All-in-all its disappointing because the car was quick, the car was good - it was much better than the car we ran last year.”

Fortunately, despite the attitude of the rear end of the car, the team felt that it was repairable in time for Clipsal, where Salmon will return to the seat for the second round of the Championship.

“Like Craig said, we had great car speed, and the ace card we had was the longevity of the Pirelli tyre,” Luff added. “It seemed to be able to cope with a double stint a lot better than it did in the past. It’s a disappointing way to end the race, because we were certainly in with a shot at the podium at the end of the day, but that’s endurance racing.”

For the MPC team, it’s a relatively fast turnaround to the second round of the Australian GT Championship presented by Pirelli, with 100 minutes of racing scheduled for the February 28-March 3 weekend.