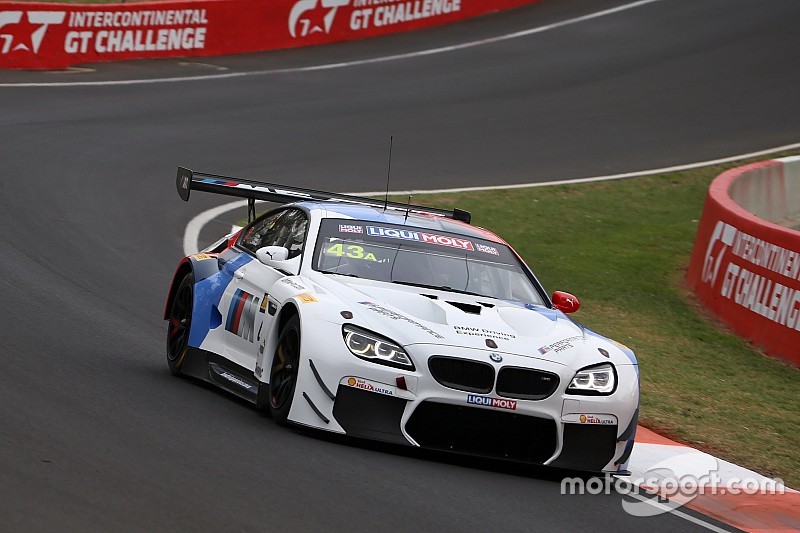 Chaz Mostert has admitted it was a 'risky' move that led to the game-changing crash that wiped two contenders out of the running for a Bathurst 12 Hour podium.

BMW driver Mostert and Porsche driver Kevin Estre were hunting down third-placed Steven Kane in the Bentley shortly before the two-hour mark when the trio ended up in a nasty clash that took Mostert and Kane out of contention.

It started when Mostert nudged Estre on the run out of the dipper, before running the BMW out wide at Forrest's Elbow as he looked to pass both cars at once.

But, after being caught out by a lapped Class B Porsche, Mostert made contact with both cars, which sent the Bentley into the lapped Porsche and the BMW into the left-hand wall.

"It was horrendous," he said. "It was terrible driving by Mostert. He was hitting Estre coming down the hill, I don't know why, then he hit Steven coming out of the corner onto the straight. It put his car out of the race with three hours to go.

"I don't know what he was thinking."

Mostert immediately put his hand up for the role he played in the crash, accepting that it was a risky move and that he was looking to make gains thanks to the lapped traffic.

"I'm 100 per cent gutted to have crashed the car when we were in such a good position," said Mostert.

"It's one of those things that's hard to take. I thought if I could clear a couple of cars I'd be on my way, but it didn't work. I took a risky option, I tried to take advantage of some lapped cars, and there just wasn't enough room for three cars.

"It was an aggressive approach, and it didn't stick.

"I'm gutted for BMW Team Schnitzer, for BMW Motorsport, and for my amazing teammates Augusto and Marco. It's been an amazing weekend, we showed how well the BMW M6 GT3 works at Bathurst.

"I think we deserved a strong result this year, but it just wasn't our day."