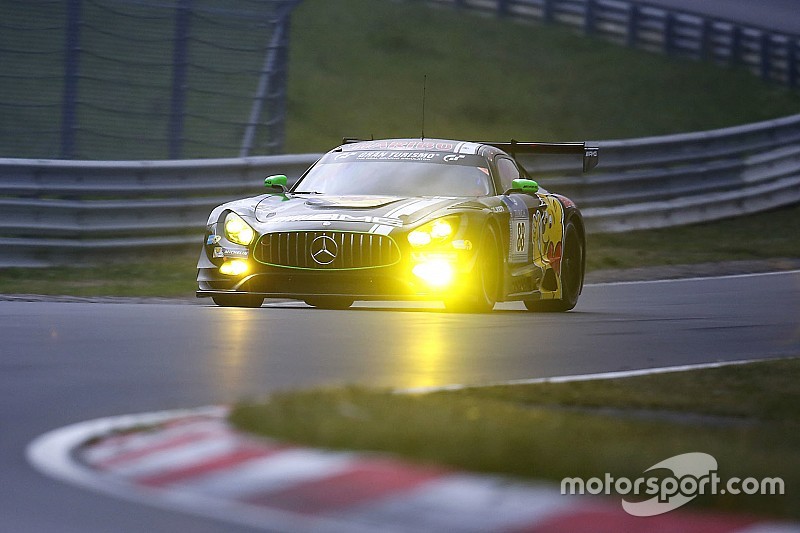 Going into the night hours of the 2016 Nurburgring 24-Hour race, Mercedes is leading the field with several of their cars after crazy weather conditions had made the first part of the race extremely tricky.

Just 50 minutes into the 24h marathon, the race had to be red flagged due to torrential rain and then hail. Suddenly, cars were spinning off at several corners, and even at slow speeds.

Race control therefore decided to play it safe and to stop racing for the duration of the storm.

After a two-hour break, the cars returned to the track for three pace laps behind the safety car. The race finally was resumed at 8pm local time on a still very wet track, and with the competitors facing another rain front.

The #9 Black Falcon Mercedes and the #18 Schubert BMW were leading the field at the time but lost out after the first set of pitstops when first HTP Mercedes took the lead and then the Schubert BMW.

However, the #18 Schubert BMW retired soon after with engine troubles and smoke pouring out of the car while leading, which handed Haribo Mercedes a 1-2 in the race with their #8 and #88 cars.

However, this 1-2 was not supposed to last very long because after a crash with a lapped car the team had to retire the #8 car, with the #88 car still in the lead after 26 laps at the eight-hour mark.

The top seven cars still lie within two minutes of each other after a third of the race.