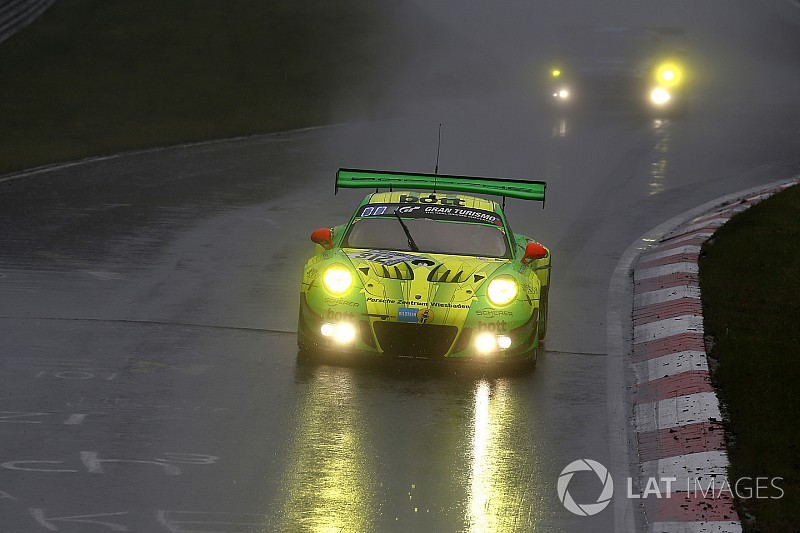 The Manthey Porsche team scored its sixth Nurburgring 24 Hours victory in a nail-biting climax to a weather-affected race that had to be halted in the latter stages.

A bold outside pass at Turns 1 and 2 of the Grand Prix loop by Frederic Makowiecki on the #4 Black Falcon Mercedes AMG-GT3 of Adam Christodoulou set up victory for the #912 Manthey crew of Makowiecki, Patrick Pilet, Richard Lietz and Nick Tandy.

It marks Porsche's 12th Nurburgring win as a manufacturer, and its first since 2011, while the four drivers all became first-time winners of the German endurance classic.

Manthey's #911 car of Kevin Estre, Laurens Vanthoor, Earl Bamber and Romain Dumas had dominated the early part of the race, while the #912 lost ground in the opening stint with a slow puncture.

But a crash for Dumas at Pflanzgarten with just over 14 hours remaining eliminated the #911 crew and turned the race into a two-way battle between the #912 Porsche and the #4 Black Falcon Mercedes.

The lead changed hands regularly after the arrival of rain in the early hours of the morning, but the pendulum swung in favour of the #4 car, shared by Christodoulou, Dirk Muller, Manuel Metzger and Maro Engel when the #912 served a three-minute penalty for speeding in a slow zone.

However, a lead of five minutes was negated when the race was suspended with three hours to go due to worsening fog, setting up a 90-minute showdown between Makowiecki and Christodoulou.

After spinning has he was passed by Makowiecki, Christodoulou fought back and closed up to the back of the Porsche, but suffered a second off at Galgenkopf and ended up 26 seconds down at the flag.

An equally exciting battle for third was resolved in favour of the #5 Black Falcon Mercedes of Yelmer Buurman, Thomas Jager, Jan Seyffarth and Luca Stolz.

Buurman looked to have lost his chance of a podium finish when he was tapped into a spin on the Grand Prix loop at the restart, but he was able to close to pass both teammate Hubert Haupt in the #6 Black Falcon Mercedes and the #7 Aston Martin Vantage GT3 of Maxime Martin.

The South African driver claimed sixth after a bold outside pass of Frederic Vervisch in the #3 Phoenix Audi after the restart, but was classified two laps down on the leaders.

Dries Vanthoor was less fortunate when he picked up a puncture passing a backmarker and had a major shunt at Tiergarten on Saturday evening, which eliminated the #8 WRT Audi.

BMW endured a wretched race, with both ROWE Racing M6 GT3s retiring before sunrise – one with a cooling problem and the other with a drive-by-wire issue – while one of the Walkenhorst cars failed to start after a heavy crash for Jordan Tresson in qualifying.

The surviving #102 Walkenhorst car was the marque’s best finisher in 13th, four laps down.

Both HTP Mercedes cars hit trouble. Dani Juncadella crashed the #47 car in the middle of the night while it was in contention for a podium finish, while the #48 machine was delayed early on by a crash for Renger van der Zande and then lost further ground when it lost a wheel exiting the pits.

Also losing major ground was the Team Bernhard Porsche, which had Andre Lotterer among its drivers, after stopping for a little under an hour to repair its suspension. The car finished 21st.

Nurburgring 24h: Race suspended due to rain and fog