Nurburgring 24h: Race suspended due to rain and fog

The 46th running of the Nurburgring 24 Hours has been suspended with just over three hours remaining due to heavy rain and fog.

Thunderstorms hit the Nordschleife in the night and soaked the track, but it wasn't until sunrise that fog began to descend on the Eifel track, severely curtailing visibility.

Race officials chose to suspend the action at 1159 local time, with 127 laps on the board for the race-leading #4 Black Falcon Mercedes AMG-GT3.

Team Manthey's sole remaining #912 Porsche 911 GT3 R had led the way with six hours left, but the car shared by Patrick Pilet, Nick Tandy, Richard Lietz and Frederic Makowiecki was forced to serve a three-minute penalty for failing to respect a slow zone.

That means the #4 Mercedes of Maro Engel, Adam Christodoulou, Manuel Metzger and Dirk Muller now in effect holds a lead of five minutes over the #912 Porsche, although it has completed one more lap.

The #7 Aston Martin Vantage GT3 of Maxime Martin, Marco Sorensen, Nicki Thiim and Darren Turner is third, on the same lap as the #912 car, followed by the #6 and #5 Black Falcon Mercedes.

The next update will be issued at 1245, with the race not resuming before 1315. The clock continues ticking during the suspension, meaning the race will finish no later than 1530 as scheduled.

UPDATE: Organisers announced the pitlane will open at 1315, with a restarted slated for 1345. 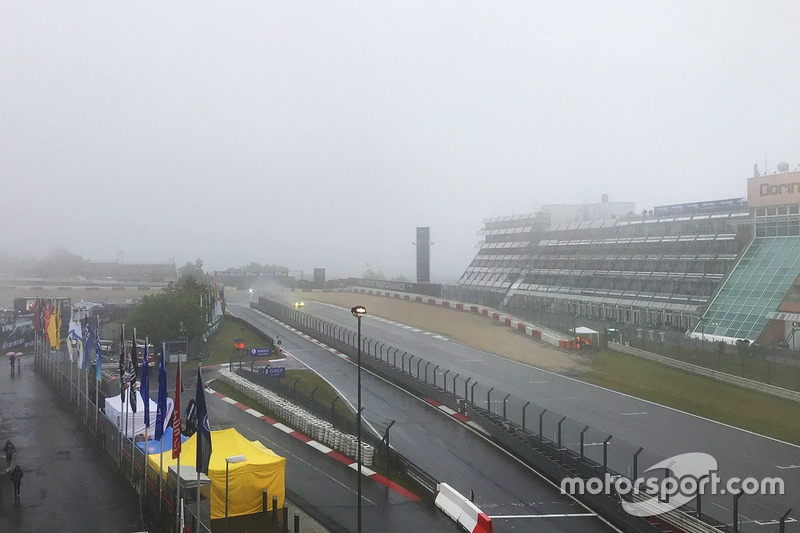 Fog covers the start/finish straight near the Dorint hotel