Olly’s best time of 2:07.990 was more than sufficient to seal the Class B pole position for Rotek Racing.

It was a day of high drama for some, and mixed fortunes for others, but Oliver Gavin did what he does best and took the Rotek Racing Audi R8 LMS to Class B pole position for tomorrow’s Bathurst 12 Hours in Australia.

Despite only 10 laps around the infamous 6.2km Mount Panorama track under his belt – the venue having rapidly become one of Olly’s favourites – the GM factory driver was tasked with qualifying in the first of two sessions to determine the grid for the once-round-the-clock enduro. Olly’s best time of 2:07.990 was more than sufficient to seal the Class B pole position for Rotek Racing by a margin of over half a second.

The team’s intention had been for him to set a benchmark time on Saturday morning and for team mate Rob Huff to bolster Rotek’s position with scrubbed tyres in the day’s second session, but gearbox troubles ultimately prevented WTCC Champion Huff from setting a representative time. They will however still start from 13th overall. 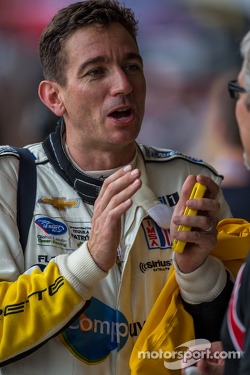 With “The Mountain” claiming several casualties during the day, including four of the leading contenders, it was with some relief that Olly managed to survive a brush with the wall during qualifying, as he explains: “I am really enjoying my time here at Mount Panorama and it was great to get out in the car for qualifying and go for a time even on a track I’m still learning. It’s a fantastic challenge and I was trying to explore the limits of a good lap time when it nearly bit me!

“I was coming through Reid Park close to an A class Ferrari and got onto the kerb which unsettled the car a little and then smacked the wall. I was worried I’d have to pit but it didn’t affect us too much in the end. I’m not sure what my time would have been without that hiccup but it was great to string a lap together anyway.”

Olly will take the start of tomorrow’s Liqui-Moly Bathurst 12 Hours, which gets underway at 6.15am tomorrow (Sunday 9 February), and live streaming can be found HERE