ORECA Technology has started the design phase of a new closed-top LM P2 scheduled to hit the track at the end of 2014. Benefitting from ORECA’s know-how and customer racing program, the ORECA 05 will be homologated in LM P2 from the 2015 to 2017 seasons and will be preceeded by an ORECA 03R during 2014.

For 40 years, ORECA has taken on countless challenges, including endurance racing and the 24 Hours of Le Mans with 19 participations alongside the world’s biggest manufacturers. The ORECA 05 that will race in 2015 will be the result of this experience that can only be gained through time. A time in which ORECA also became a constructor in its own right, producing the ORECA 01 in LM P1, 17 ORECA 03 in LM P2, and 30 ORECA-FLM 09 in LM PC ! These three cars share a common point : the winning gene. The same gene that will make up the ORECA 05’s DNA, to compete at the highest level of endurance racing : at the 24 Hours of Le Mans, the FIA World Endurance Championship, the Tudor United SportsCar Championship as well as the European Le Mans Series and Asian Le Mans Series. 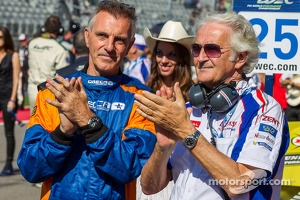 In addition to being a team that has claimed victory at some of the greatest endurance races, from Daytona to Sebring, ORECA also became a constructor known for its success – 18 wins for the ORECA 03 in three seasons – and for its know-how. It is the reason ORECA Technology was selected by REBELLION Racing to design and build the REBELLION R-One LM P1, to compete in 2014.

"The ORECA 03 LM P2 has had great sporting and commercial success through the numerous teams who have put their confidence in this chassis," says Hugues de Chaunac. "The ORECA 05 will be a radical change compared the the previous car because it will have a closed cockpit. But our design bureau is working to include innovative solutions and to set itself apart from concepts that are present today. We want to gain momentum on all levels, with a global approach to technical and marketing strategies. This ORECA 05 will be the symbol of our technological know-how gained over 40 years of challenges met and from several participations in the 24 Hours of Le Mans with the world’s biggest manufacturers."

The chassis of our new closed-top LM P2 will respond to the new LM P1-2014 regulations, notably in terms of safety, including passice safety and driver," explains David Floury, ORECA Technical Director. "This car will be completely new and our objective is to continue the momentum begun by the ORECA 03. With the ORECA 05 in 2015, we want to take the next big step, by offering a car that’s even more reliable and with greater performance. We’ve also developped the ability to give support to our customer teams both on the technical and logistical sides, and that support is crucial."

After an ultra successful 2013 season, ORECA Technology looks to 2014 with the same ambition. Faithful to the ACO regulations, favouring the customer racing focus of LM P2, ORECA is aiming to give its customer teams the chance to aim for the top podium step and will not rest on its laurels. This is why ORECA will be offering an evolution of its current LM P2 starting in 2014, the ORECA 03R. "The ORECA 03 has reached a certain level of maturity. The car is reliable and performs well, and with 10 wins in 2013, six of which in the FIA World Endurance Championship and the same number of pole positions, it has shown all its qualities. Six different teams won in 2013." says David Floury. « The goal of the ORECA 03R is to capitalise on this base, and to impliment the technical feedback provided by the 10 teams who have race the ORECA 03, all while maintaining a cost cap."

The ORECA 03R and the ORECA 05 will only be entered by customer teams of ORECA Technology, which in LM P2 is concentrating on its constructor and support activity. The two prototypes will be designed to be powered by all types of powerplants.

KCMG chooses the ORECA 05 in bid for the World Endurance Championship !