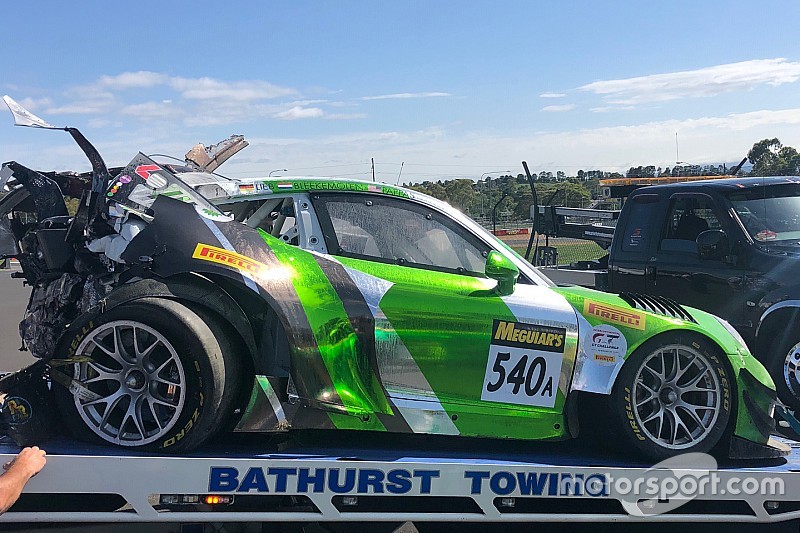 Tim Pappas has been airlifted to hospital in Sydney following his nasty crash during Bathurst 12 Hour practice this morning.

The Black Swan Porsche driver hit the wall on the outside of The Chase just minutes into this morning's opening practice session, the impact severe enough to result in the car briefly catching fire.

He was taken to the infield medical centre for initial checks, Porsche quickly confirming that he was conscious and on his way to a regional hospital for further attention.

Pappas has now been airlifted to Sydney for ongoing treatment, however Black Swan team boss Chris Barber told Motorsport.com his condition is stable.

"Right now he's alert and awake and in a stable condition," Barber said.

"He's been flown to Sydney as a precautionary measure.

"He has a little pain in his shoulder so they're going to look at that, and pain in his back. But other than that he's alert.

Barber added that the squad is still unsure what led to the crash, with data from the wrecked car currently unavailable.

"Not at this time," he said. "We have to wait for Tim to be cleared to see the car and get the data out of it. So right now we're unclear."

With its sole car out of the race, the team has already began packing up for the trek back to the US.

"The important part of it is that Tim is okay, that's what we're really concerned about. But being here and coming all this way and all the work that went into it, of course we're disappointed," Barber said.

Update: Porsche has issued another statement, revealing that Pappas suffered fractures on his right arm and pelvis. He will stay in clinic for further treatment.