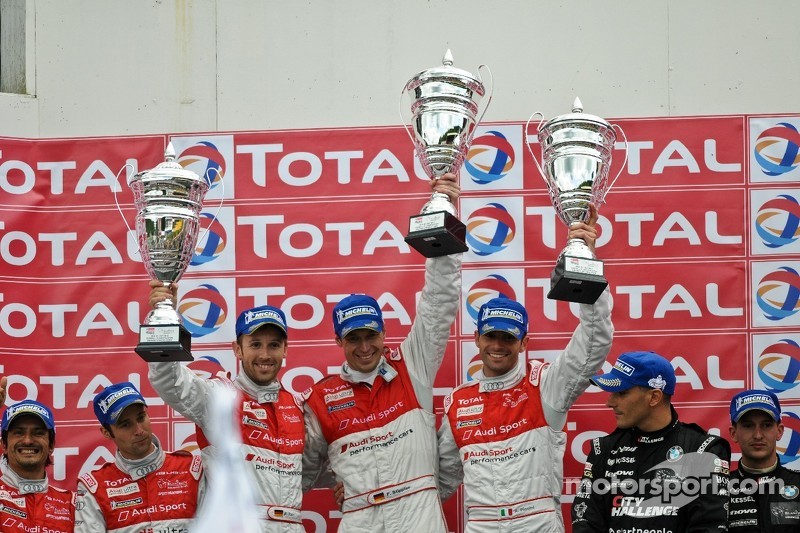 Nurburgring winners Phoenix Racing have scored the second major 24-hour race victory of the year for the Audi R8 GT3, as well as completing a hat-trick of 24-hour triumphs for the German brand to go with the R18 TDI's mastering of Le Mans in June. The #16 crew of Andrea Piccini, Frank Stippler and Rene Rast started the Spa 24 Hours Blancpain Endurance Series race from 29th on the grid, but a combination of consistent pace, multiple safety cars, near-perfect reliability and typically efficient pitstops slowly drew them up the field and into contention for a win by Sunday morning.

But the result was far from certain in the final few hours, as the #16 crew fought a back-and-forth battle for the win with the WRT team's #1 Audi R8, driven by Stephane Ortelli, Christopher Mies and Christopher Haase. First, Mies spun the #1 at the Bus Stop chicane, putting the #16 a lap in front. Then, disaster struck the second WRT Audi crew (who were on course for a podium finish behind their team-mates) when the car came to a stop, before getting going again at the end of the pit lane. It then transpired that driver Eric Sandstorm’s harnesses had worked loose, and he had stopped to tighten them. This proved to be a very lucky decision, as on the very next time around, the car crashed heavily, bringing out the race's fifteenth safety car.

That would in turn lead to the #1 Audi being held at the end of the pit lane and losing its advantage over the Phoenix car. Two further setbacks ruined any chance the #1 had at victory: a slow puncture and a penalty for an unsafe pit entry. The latter came after Lorenzo Bontempelli crashed his Ferrari 458 heavily at Blanchimont, bringing out yet another safety car. WRT made a late decision to bring Ortelli in, meaning the Monegasque had to swerve sharply to make it into the pitlane. The stewards judged it to be a dangerous move and imposed a drive-through penalty, which ended victory hopes, but the car was far enough ahead not to lose its second place.

The #2 Audi's demise settled the battle for third in favour of the #66 Vita4One BMW Z4 of Frank Kechele, Greg Franchi and Mathias Lauda, which had run near the front of the field at the beginning of the race, before struggling in semi-damp conditions during the night and finding pace again as the track dried in the morning. It very nearly didn't make it however: a dramatic last-lap puncture required all of Kechele's skill and judgement to get the car home safely.

The Marc VDS Racing trio of Bas Leinders, Max Martin and Markus Palttala matched their fourth-place finish from the Nurburgring 24 Hours, but will surely feel they could have finished on the podium or higher with a bit more luck: they were delayed by what was seen as a harsh drive-through penalty for Markus Palttala, as well as a starter motor problem at every pit stop towards the end of the race, plus a minor oil fire that struck around lunchtime on Sunday.

Fifth place overall, and the honour of being first Pro-Am car home, went to the #52 AF Corse Ferrari 458 Italia of Niek Hommerson, Louis Machiels, Andrea Bertolini and Alessandro Per Giudi. For much of the race, it had looked like their team-mates in the #51 car would join them on the class podium, but there was heartbreak in the closing hours when the Italian car had to be retired due to a water leak. That promoted the Haribo Racing Porsche of Uwe Alzen, Mike Stursberg, Hans Guido Reigel and Christian Menzel to second in the class, ahead of the #10 SOFREV Ferrari 458, crewed by former F1 Olivier Panis, former French soccer goalkeeper Fabien Barthez, Eric Debard and Morgan Moulin Traffort.

It also meant the Le Mans-winning trio of Tom Kristensen, Andre Lotterer and Marcel Fassler finished a remarkable sixth overall, having lost over half an hour to repairs at the beginning of the race. This is the first major international 24-hour race win for both Andrea Piccini and Rene Rast. For Stippler, the win caps off a superb 2012 double, as he's already triumphed with Phoenix Audi at the Nurburgring 24 Hours back in May.

Pro class podium finishers – what they had to say:

Frank Stippler: “That was exhausting – I had no water for the second-last stint, so now I know what an engine with no oil pressure feels like! It was very hard for us, because our top speed was not always the best, so we had to take big risks when passing people. Even some lapped cars were fighting like hell – I don't really know why – so we had some minor contact. But the Audi R8 was a tank – I'm so happy it lasted the race.”

Rene Rast: “That was a perfect weekend – I didn't expect to win my first Spa 24 Hours. But we knew we had good race pace and fast pit stops. The team made all the right decisions and no mistakes. I'm used to driving in the rain, but I'd never seen anything like what we had here.”

Andrea Piccini: “This definitely wasn't my first Spa 24 Hours – I've been trying to win this race since 2002! I'm very pleased with Audi and Team Phoenix. As you can see Frank is exhausted – he definitely did the biggest job. The BMWs and McLarens were definitely faster in parts, but we had the best pit stops and made no mistakes.”

Christopher Mies: “We had bad luck with the timing of some of our pit stops next to the safety cars, but I think the Audi teams put on a good show racing each other. But I was really happy to be asleep during the night when that rain came!”

Christopher Haase: “It's a pleasure to be on a 24-hour podium for the second time this year, after the Nurburgring. That was a difficult race throughout, but the way even the Phoenix and WRT teams and drivers worked together was special – it was like a family and very fair.”

Stephane Ortelli: “The car was fantastic – great fun and very exciting to drive around here. The BMWs were always close, so it was a great fight. And I really hope to do a 24-hour race with these co-drivers again.”

Matthias Lauda: “This was my first Spa 24 Hours and it was a great experience. We lost two laps near the start due to making the wrong tyre choice when the rain came, and we're two laps behind here at the end of the race, so it's unfortunate.”

Greg Franchi: “We've had bad luck in the first three races, so this is a fantastic result. I think the next rounds at the Nurburgring and Navarra will suit our car, too.”

Frank Kechele: “After the rain, we just focused on our strategy. We were as low as 17th at one point, but we made a lot of gains during the night – we made a good decision to change to slick tyres early as it dried out.”

Pro-Am winners – what they had to say:

Andrea Bertolini: “We had a big problem with a red light at the pit exit being left on for too long; it cost us about a minute and 25 seconds. But fortunately we're here to talk about our win. I think the race director in particular did an excellent job with the safety cars in very difficult conditions. We had a small gearshift problem on the car at one point, but it didn't affect us too badly. My co-driver Alessandro Per Giudi has finished second at the Spa 24 twice, so this is a special result for him.”