Plenty of novelties and capacity grid for 24H Dubai 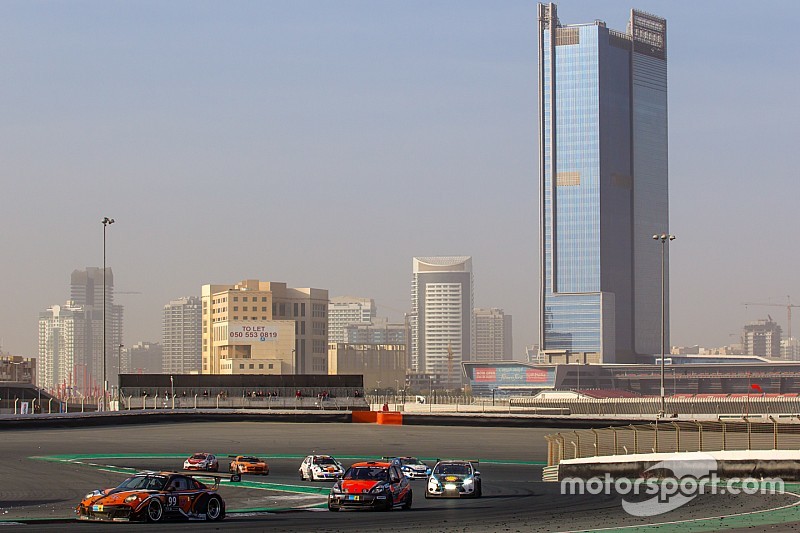 The maximum grid capacity has been reached with 100 cars on the entry list.

Dubai – The 2016 season in the 24H Series powered by Hankook gets underway at Dubai Autodrome with the eleventh running of the Hankook 24H Dubai (January 14-16, 2016). For the first time in history of the original endurance race in the Gulf region, the maximum grid capacity has been reached with 100 cars on the entry list. The field provides a great mix of GT cars and touring cars including plenty of cars previously unseen in the Hankook 24H Dubai.

Some new classes will be introduced, too, including a separate category for the increasingly popular cars to TCR regulations. With lights-to-flag live coverage on Motors TV and live streaming on the series’ website at www.24hseries.com, live broadcasts planned on several other TV channels throughout the world and the expert commentary from Radiolemans.com, the race in Dubai looks set to become another memorable event.

With Lebanese team Memac Ogilvy Duel Racing and Swiss lady racer Chantal Kroll, both the 2015 overall teams’ champion and the overall drivers’ champion of the 24H Series24H Series powered by Hankook will be back to defend their titles. With its SEAT Leon Cup Racer, Memac Ogilvy Duel Racing will be a strong contender in the TCR class while Chantal Kroll will be one of the drivers on the Mercedes-Benz SLS AMG GT3 of Swiss team Hofor Racing. All the 2015 champions will receive their trophies and the limited-edition BRM 24H Series champions’ watches, kindly provided by the series’ timing partner BRM, during a special celebration in the paddock of Dubai Autodrome on Wednesday evening prior to this year’s race.

Class A6: New generation coming up

With 29 cars, the A6 class is the largest in the field for this year’s race in Dubai. A new generation of GT3 cars is coming up and thus, the Hankook 24H Dubai will mark the maiden outing in a 24-hour race for the new Mercedes-AMG GT3. German team Black Falcon will be running two of the new cars, one of them under the Abu Dhabi Racing Black Falcon banner, with a line-up that includes former Dubai race winners Khaled Al Qubaisi from the UAE, German Hubert Haupt and Dutchman Jeroen Bleekemolen.

The other drivers in the car are German Maro Engel, who became the winner of the inaugural FIA GT World Cup in Macau in November last year, and Dutch driver Indy Dontje. The team’s other car includes former winners as well, with Saudi-Arabian Abdulaziz Al Faisal, Dutchman Yelmer Buurman and Germans Bernd Schneider and Hubert Haupt, the latter being entered on both Black Falcon cars.

Another car racing in Dubai for the first time is the new Audi R8 LMS, a car with a pedigree that already includes the outright win in the Nürburgring 24 Hours and a podium finish in the Spa 24 Hours. German team C. Abt Racing will be running a car with a strong line-up that includes Daniel Abt, Christer Jöns, Andreas Weishaupt, Isaac Tutumlu Lopez and Matias Henkola.. Land Motorsport will be present with a new Audi, too, with Australian GT champion Christopher Mies and former Dubai race winner Carsten Tilke among its drivers. Car Collection Motorsport has entered two new R8s, including Markus Winkelhock. British team Optimum Motorsport will also be running a new Audi with factory-supported driver Frank Stippler while Belgian Audi Club Team WRT will be making its debut in Dubai with a new Audi as well.

Another representative of the latest generation of GT3 cars is the Lamborghini Huracán that will be making its Dubai debut with Austrian teams HB Racing and Konrad Motorsport (including former Dubai race winners Rolf and Mark Ineichen and Christian Engelhart) and German squad Leipert Motorsport. Belgian team Boutsen Ginion Racing will be running a Renault RS01 FGT3, the spectacular silhouette car taking on its maiden 24-hour race.

Competition in the A6 class is likely to come from Scuderia Praha, a race-winning team in the 24H Series24H Series powered by Hankook, with its Ferrari 458 Italia. UAE-based team Dragon Racing, a regular entrant at Dubai, will be running a pair of Ferraris. And as no endurance race is ever complete without Porsches in the field, there are some 911s in the A6 class, too, entered by German teams Artthea Sport and Attempto Racing. V8 Racing will be running a Chevrolet Corvette next to its other car, and German team MRS GT Racing is present with a Nissan GT-R GT3.

Although participation with older generations is still possible, the Porsche Cup class is now exclusively filled with cars from the current 991 model generation. A total of 17 Porsches from ten teams is expected in Dubai. Bahrain-based Lechner Racing Middle East and GDL Racing from San Marino each have three cars, with His Highness Sheikh Hasher Al Maktoum, a keen motorsport enthusiast and a member of Dubai’s ruling family, as one of the drivers on a Porsche run by Lechner Racing Middle East. German teams Black Falcon TMD Friction and HRT Performance and Austrian outfit MSG Motorsport each have two cars while teams Förch Racing by Lukas Motorsport and Platinum Racing, both from Poland, MRS GT Racing from Germany, B2F Compétition from France and PFI Racing Sweden each have one Porsche on the grid.

Plenty of variety in SP2 and SP3

This year’s race in Dubai marks the debut of the TCR category as a separate class in the 24H Series24H Series powered by Hankook. With four entries, the SEAT Leon Cup Racer is the car of choice in the TCR class, represented by reigning teams’ champions Memac Ogilvy Duel Racing, NKPP Racing, CTR-Alfatune and Zest Racecar Engineering. The A3 class has also been revised and now includes three SEAT Leon Supercopa cars from RTG by Gladysz Racing, RKC/TGM and Unior Racing Team Austria, a BMW M3 Coupé by Hofor-Kueperracing, the reining A5 class champions, and Team Altran’s pair of Peugeot 208 GTIs. The CUP1 class for BMW M235i Racing Cup machines will have six cars: two each from German teams Bonk Motorsport, the reigning CUP1 class champions, and Sorg Rennsport and one each from QSR from Belgium and DUWO Racing from Luxemburg.

The A2 class rounds out the touring car segment with seven Renault Clios from UAE-based team 2W Racing, presenza.eu Racing Team Clio from Switzerland, the reigning A2 class champions, AD Racing/Flexlease.nu and Team Sally Racing from Denmark, Preptech UK and two cars from Modena Motorsports from Hong Kong, plus UAE-teams ZRT Motorsport with its Honda DC5 and LAP57 Racing Team with a Honda Integra, German team Besaplast Racing with a Mini Cooper S JCW, Danish Team K-Rejser’s Peugeot RCZ, VDS Racing Adventures from Belgium with a Honda Civic Type-R and SVDP Racing from the UAE with a BMW 120D.

After optional private tests on Wednesday, January 13, official track action starts on Thursday, January 14, with free practice from 11.30 till 12.35 hrs and from 13.30 till 16.00 hrs, followed by qualifying from 16.15 till 17.30 hrs and night practice from 18.00 till 20.00 hrs. There is a warm-up on Friday, January 15, from 10.30 till 11.00 hrs. The race starts on Friday at 14.00 hrs and ends on Saturday at 14.00 hrs, followed by the prize-giving ceremony. Motors TV will broadcast the race live in its integrity, with coverage from Friday 13.30 hrs till Saturday 14.30 hrs, but will also show qualifying and night practice on Thursday. Additionally, TV stations Viasat Motor, Sportklub, Dubai Sports TV and Gear One TV plan to show parts of the race live.