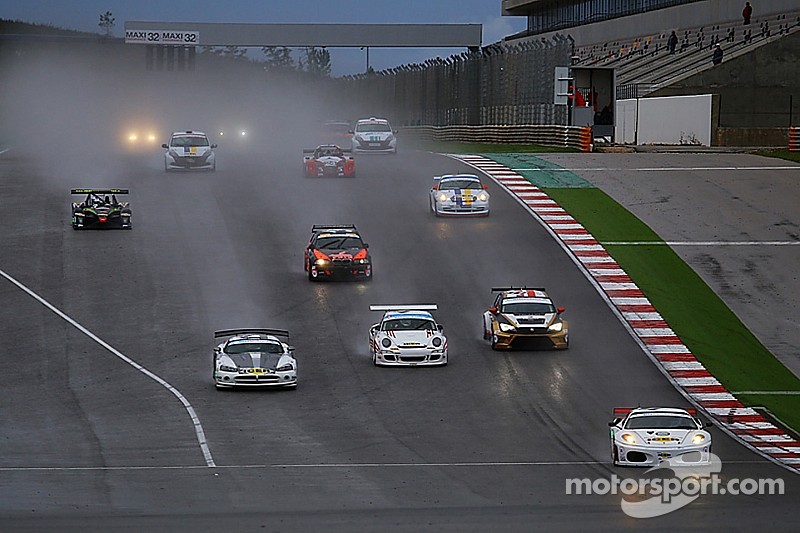 Longest endurance race of the century gets underway in changeable conditions.

Autódromo Internacional do Algarve: As the race teams arrived at Portimao circuit this morning in the pouring rain, with lightning flashing in the hills, they must have been worried about starting a 32 hour race in such deteriorating conditions.

Fortunately the rain paused - and then stopped altogether - in time for the cars to be presented on the grid surrounded by crew, friends, media and a veritable squadron of glamourous grid girls before the presidents of both the Spanish and Portuguese motorsport federations waved away the field sharply at 9 o'clock under both national banners.

Only 2 cars failed to start from the grid itself: Cor Euser Racing's BMW 120 diesel, former TransAm star Jim Briody at the wheel, started from the pit lane following a last minute turbo change and only the Veloso Motorsport Seat Leon remained on the pit road – suffering an unfortunate ECU systems failure which delayed their start by some 3+ hours, the no. 13 car now 'on a mission'.

The Peugeot RCZ course car pulled off after a single lap and the field took a flying start at 9:04:11

The very rapid Wolf prototype had suffered both clutch and fuel system problems in night qualifying but both had been resolved and the fastest qualifier with ex-GP2 star Javi Villa was also race leader for much of the early running.

As the 6 hour mark approached, former Spanish GT champion Balba Camino was looking forward to her stint in the Wolf - her first race stint in 9 years: “It was great when Jesus Diez called with the invitation – I am very happy to be back racing. The Wolf is very responsive and nice to drive – but because of our problems last night I have only had 3 laps so far! But it is a long race (- my first stint will be 2 hours - so I will have plenty of time to settle in.”

On track action: From the startthrough hour 6

Under on-off rain and occasionally drying conditions, the lead has changed hands regularly throughout the early running, with 5 different cars - representing 4 of the 5 classes - all having been listed at the top of the timing page.

At 3 pm (6 hours from the start) the race was led by the Maxi Sport Number 11 Formula Racing Seat Leon of Jose Antonio Monroy, Mikkel Mac, Lars Steffensen, Bo McCormick and Johnny Laursen. The Danish entered Seat is being run by Portugal’s Veloso Motorsport.

Running in the Maxi Sport class, the Seat is playing an excellent game of tortoise against two cars which have been enthusiastic hares. For much of the period the lead was traded between the very fast Number 3 Maxi Prototype class Wolf-Honda GB 08 of Team Icer Brakes. It has been driven by the formidable lineup of current and past Spanish champions Javi Villa, Salvador Tineo, Angel Burgueño, Jose Luis Abadin, and Balba Camino. Run by the semi-works Italian team, Avelon Formula, the Wolf had its clutch rebuilt before the race and then encountered steering issues during the fourth hour. Until then they had been swapping the lead with the Number 8 Maxi Cup class Bolido Racing Dodge Viper.

The Viper was started by M32H race organizer and 2014 Spanish GT class champion Jesus Diez and then taken over by ex-European Truck champion Antonio Albacete and Agustin Sanabria, the American-built car was often the fastest on the circuit but was hampered by poorer fuel economy. A steady mist settled over the circuit during the fourth hour and this played havoc with one bank of the V-10’s cylinders having its electrics soaked.

Another car that has featured strongly has been the Number 12 British-entered Intersport Racing BMW M3 CSL. Driven by Kevin Clarke, Adam Hayes, Ian Donaldson, Fiona James, and Simon Atkinson, the Maxi Sport class car led overall for many laps until a bad wheel bearing and a stripped driveshaft spline led to a loss of 25 minutes and a drop down the order.

The Maxi Touring car category is enjoying one of the more spirited contests in the event. It was led in the early stages by the Number 18 Dale Gas Renault Clio started by Alvaro Vela. However, brake problems slowed them and the class is now in the control of two steady running BMWs entered by the Netherlands’ Cor Euser Racing. Amazingly the Number 16 BMW 120d rose as high as third place overall.

This came after it started from pit lane thanks to spending all morning replacing the turbocharger. Started by Jim Briody, it is running a few laps clear of their team BMW, a near stock 318 Cup car that was started by endurance stalwart Hal Prewitt.

Victory for Jorge Lorenzo and Kessel Racing at Gulf 12 Hours