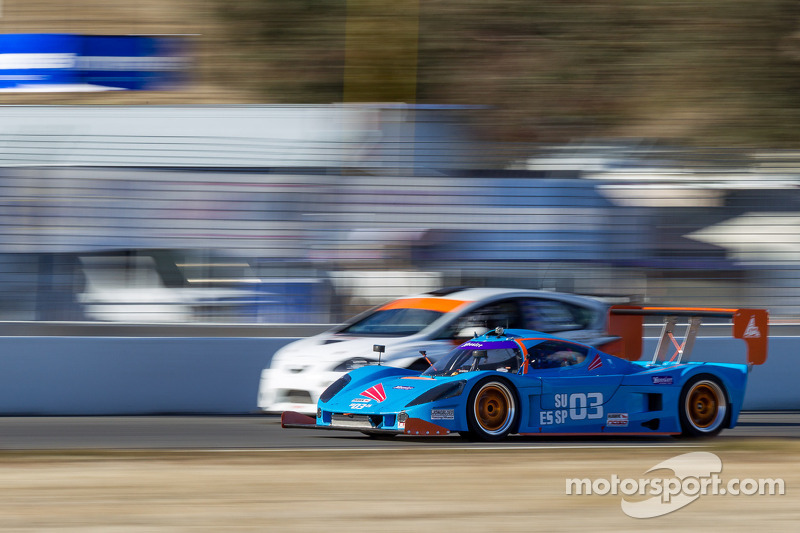 USAF 25 Hours of Thunderhill has reached the half-way mark

WILLOWS, Calif. (Dec. 7, 2013) -The No. 03 Qucik Racing Superlite is leading the United States Air Force (USAF) 25 Hours of Thunderhill at the half-way mark.

With the thermometer showing 30-degrees the USAF 25 Hours of Thunderhill has reached the half-way mark. With 57 competitors still running, the No. 03 ES Class Team Quick Racing Superlite is leading the event with 350 laps in the books.

Owner and driver Chris Durbin is a little surprised to be leading at half distance. "The car has been very reliable. It hasn't broken yet. I just got out an hour ago. I did a three hour stint and the car was running great. We are just trying to take care of the car and hope we have something left for the end. The JFC car is coming back fast. I am a little surprised to be leading. This is only the fourth weekend that this car has been out. It is a good car, but this is a long race. We are going to keep saving it for late run."


The No. 52 JFC Racing Wolf is leading the ESR Class, fourth overall. Al Unser Jr. is sharing the car with his son Al Unser III, Miles Jackson and Ivan Bellarosa.

"We had that electrical problem early," Unser Jr. said. "We found that a ground wire was broken on the alternator, so we brought it to the truck and fixed it. That cost a bunch of laps. The car has been out running strong for two plus hours. Miles is in the car right now and everything is running very well. We are just trying to run laps, be smooth and stay out of trouble. We will catch them, eventually."

"My stint was really clean," Boicelli said. "I was the only driver to be able to run my whole sting without a caution, which is surprising. The car is handling well. Overall we are putting in fast competitive lap times. I was able to build our lead to about seven laps on second place. On one of our pit stops we had to do some track side repairs on the muffler, which cost us a couple of laps."


In E1 the No. 27 Team Honda Research West Acura is still leading the category. Scott Nicol is happy with the way the car is running.

"It is going well," Nicol said. "We are running our strategy. Our car does have some issues like a check engine light. We are going to put some oil in and we need to take care of the transmission. So far we have had a clean run, tires, gas and a fresh driver. We are going to keep plugging away."


The E2 Class is headed by the No. 27 RDR Racing Mazda RX-8. Jeremy Barnes took the wheel for the first night shift.

"We're really not trying hard at this point," Barnes said. "Just running around in fourth gear saving the car. The key is to get to the car to the morning. The race starts somewhere around 9:00 am. Just keeping our head down. The RX-8 is as strong now as it was at the start of the race."


In the E3 Class the No. 05 949 Racing Mazda Miata leads the Miata packed division. Gordon Jennings is pleased with the team and the car. "It is going great," Jennings said. "The car is reliable, we are up four laps and are having no problems. The cold weather is a plus for the driver, it is keeping us nice a cool. It is a little rough for the crew, but for the drivers it is great. The cold weather helps us to make a little more horsepower, but the grip level goes down. Now we have our fingers crossed to the end."