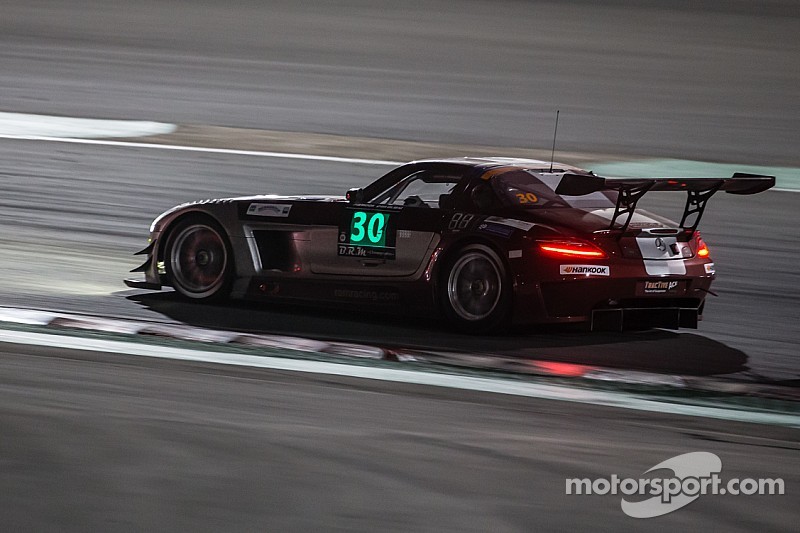 The race resumes with the final eight hour Part 2 beginning on Saturday morning at 09:30.

Mugello – The #30 Ram Racing Mercedes SLS AMG GT3 leads the Hankook 12H Italy-Mugello after the completion of Part 1 of the 12 hour race. The top four finishers ended on the lead lap. Part 2, tomorrow morning, will start with each car’s lap totals intact but with the margins erased. This means that the top four teams will continue where they left off, side-by-side and nose-to-tail.

Behind the leading Mercedes are the #7 HB Racing Team Herberth Porsche 997 GT3 R, the #66 Black Pearl Racing by Rinaldi Ferrari 458 Italia GT3, and the #67 GDL Racing Mercedes SLS AMG. The end of the four hour Part 1 marks the start of an overnight intermission. The race resumes with the final eight hour Part 2 beginning on Saturday morning at 09:30.

Pierre Kaffer, starting driver in the #66 Ferrari, led from pole position and held the spot until being passed on track by Robert Renauer in the #7 Porsche. These two teams, as well as the #30 Mercedes, traded the lead several times. Charles Espenlaub led briefly overall as his very frugal #20 MRS GT Racing 997 class Porsche car remained out longest of all the top cars.

The #67 Mercedes also led for a period before the #66 Ferrari retook the top spot. It looked set to end Part 1 at the front until Alexander Volz had a spin and stalled momentarily.

The A6-Am sub class was led by the #5 Car Collection motorsport Mercedes SLS AMG GT3 with a margin of more than one lap over the #10 Hofor Racing SLS AMG.

The contest in the all-Porsche 997 was a struggle between three teams. The #17 Ruffier Racing entry finished ahead of the two Porsche Lorient Racing entries, #63 ahead of #62. All finished on the same lap and will start together in the morning. The early leader in the class, the #20 MRS GT Racing 991 Cup, lost considerable time after spinning and stopping on course.

The SP2 class consists of silhouette specials and some faster production based cars. The Ford-bodied cars of MARC Cars Australia enjoyed a 1-2 in class at the intermission. The #92 MARC Focus leads over #91 MARC Focus by one lap while the #96 Audi TTRS 2 was a bit further back in third place.

The #160 Cor Euser Racing Lotus Evora had been able to maintain the lead in the SP3 class despite having lost time after tangling with a Mercedes. Second in class was the #163 Optimum Motorsport Ginetta G55. Several of the Ginettas in the race had a variety of mechanical problems.

The A3T class was closely fought. At the break it was led by the #98 NKKP Racing Seat Leon Cup Racer over the slightly older Seat model, the Supercopa, of Memac Ogilvy Duel Racing (#95). As they completed the same number of laps they will start with no gap between them when the race resumes.

A5 production based class

The A5 production based class was led by the #31 Duller Motorsport BMW E46 M3 over the similar BMW of #75 Hofor-Küpper Racing. It marked a good come back for the Austrian team as they led the class early on, made a long stop, and returned to head A5.

The A2 class was led by the #115 K-Rejser Peugeot RCZ. A surprising second in class was the #135 Red Camel Seat Leon. It is actually part of a three-car D1 sub-class which is classified for the race under A2 but receive separate championship points. Third in A2 was the #126 Team Sally Racing Renault Clio and the next of the diesel cars was the #138 KPM Racing Volkswagen Golf.

The all-BMW CUP1 class featured a thrilling back and forth struggle between two cars. The #68 Pricon Racing M235i Racing ended up barely ahead of the similar #71 Team Securtal Sorg Rennsport entry. The two had swapped the top spot for most of the afternoon.

The end of Part 1 coincided with a beautiful Tuscan sunset and took place in perfect spring weather. The cars are placed into parc ferme overnight and may not be touched by the teams until the race resumes. There were 72 starters and only two retirements, the #3 Walkenhorst Motorsport BMW Z4 had overheating problems and the #87 GDL Racing Porsche Cup car crashed at Casanova Corner. There were two short neutralizations of the race in order to recover stranded vehicles. When the race resumes the cars will retain the number of laps completed during Part 1.

Lola Heritage division and Chevron look towards the future