Davide Rigon " A 24h that is worth a whole season " 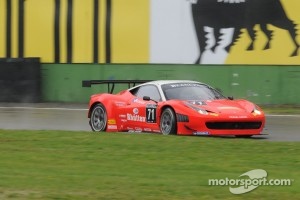 Waiting is over. This week-end spotlights will be turned on the most important meeting of the Blancpain GT Endurance season: the 24h of Spa. It’s a hard but charming circuit, nestled in the forest of Ardennes.

For Davide Rigon this will be a return on the ups and downs of the Spa circuit behind the wheel of a Ferrari, just after the 2008 victorious experience in the FIA GT World Championship. The race is worth a whole season, not only for the charme and glory that go with it but also for the standing: scores will be awarded during race three highlights. So being constant and handling a good management of the Ferrari 458 are race most important issues. After getting on the podium at Paul Ricard, the Kessel team driver, together with his team mates Zampieri and Gattuso, is dead set on getting another important result.

“ The 24h of Spa represents my most important race of the season. I trained a lot for this race I’ve already won in 2008 behind the wheel of a Ferrari GT2 of BMS team. I remember each lap was like a qualifying lap. We have to maintain top speed and remain focused throughout the race, ‘cause it’s so stressful. As usual rain will play a dominant role” says Davide Rigon.

“ This year we’re in good shape, even if we’ve been quite unlucky and we’ve got less than deserved. This kind of event can deeply influence the whole race season. It’s three races in one. Scores will be awarded after the 6th, the 12th and the 24th hour. This is the reason why we have to be constant and handle the car with kid gloves, even if till now the Ferrari has been a very reliable car. About 85 cars will take part in the race and also Audi and Porsche official drivers are expected to run the competition. Track will be so crowded, so it will be so hard to find free stretches.”, says again Rigon.

“ I’m confident that we can get a good result. During a 24h race difficulties are so many, but the crew is one of the most powerful and the team has enough experience to do a good job. I wish good luck to everybody!”, comments the manager form Faenza Giovanni Minardi.

Seven BMW Z4 GT3s line up at the Spa-Francorchamps 24 Hours.