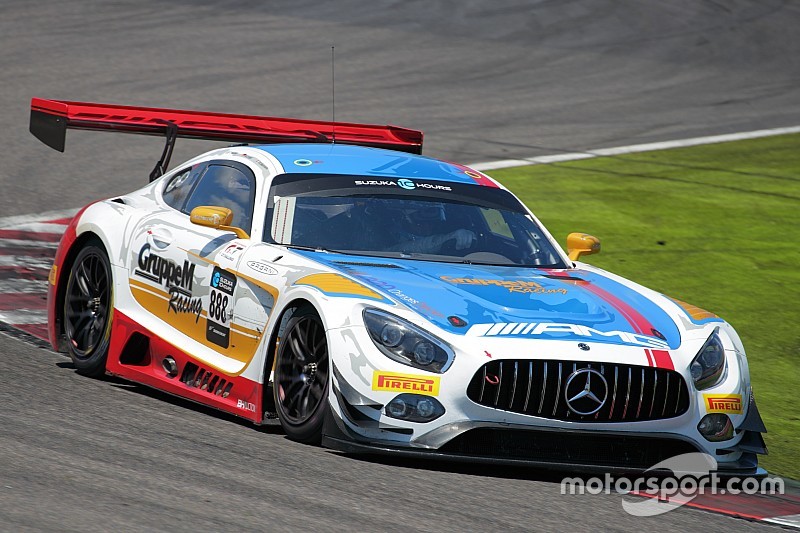 Mercedes dominated the first running of the Suzuka 10 Hours, with the GruppeM squad leading a 1-2 finish for the German manufacturer.

The #888 trio of Raffaele Marciello, Maro Engel and Tristan Vautier moved into the lead at the start of the second hour and were unchallenged for victory thereafter, ending Audi’s unbeaten streak in the 2018 Intercontinental GT Challenge season.

It was the pole-sitting #28 HubAuto Corsa Ferrari that led the field in the first hour, only to drop outside contention when it was handed a drive-through penalty for a start procedure infringement.

Mechanics were seen working on the Pro-Am Ferrari after the formation lap had begun and although it was released before the final car had gotten off the line, it still breached the rule which states that no personnel shall be allowed on the grid after the 15-second board.

HubAuto’s early troubles allowed the #888 GruppeM Mercedes to seize the lead, with the #43 Strakka Mercedes making headway in the first half of the race to catapult itself into second position.

The #6 Absolute Audi and #66 WRT Audi of Christopher Mies, Dries Vanthoor and Frederic Vervisch did one more stop than their rivals, with their strategies allowing them to finish as Mercedes’ closest challengers in third and fourth respectively.

Maxi Buhk, Oliver Rowland and Adrien Tambay were seventh in the #44 Strakka Mercedes, ahead of the #21 Audi Hitotsuyama of Richard Lyons, Ryuichiro Tomita and Alessio Picariello, which recovered from an early spin to end up eighth.

Sheldon van der Linde, Stuart Leonard and Jake Dennis finished ninth in another Audi, the #17 WRT factory entry, while the top 10 was completed by the #75 Sun Energy 1 Mercedes of Kenny Habul, Mikael Grenier and Luca Stolz.

Nissan was the lead Japanese manufacturer in a race dominated by German marques, until the #23 KCMG of Edoardo Liberati, Richard Bradley and former Audi LMP1 star Oliver Jarvis stopped on track just before the halfway mark.

The race, which replaced Suzuka 1000km on the event’s calendar, saw only a single safety car intervention when the #07 M-Sport Bentley and the #58 Garage 59 McLaren collided in the fifth hour.

Factory McLaren driver Come Ledogar was attempting a move when he was pitched into a spin at 130R, the 650S GT3 getting beached in the gravel and forced into retirement.

The Bentley, which was in hunt for a podium finish early on, also retired after nearly running out of fuel and then suffering a spin at Degner the lap after it exited the pitlane.

It was also handed a drive-through penalty for a separate collision with the #27 HubAuto Corsa Ferrari.