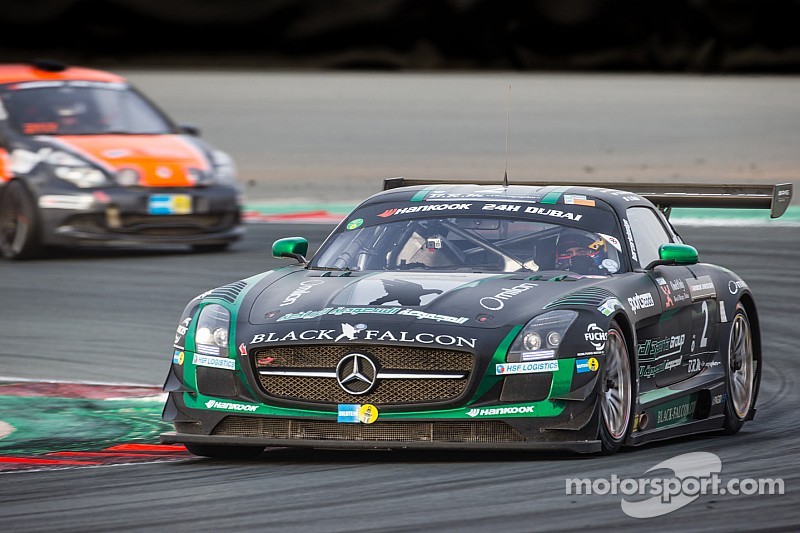 Team Black Falcon made history in the 10th running of the 24 Hours of Dubai as it secured its third outright victory in the grueling race.

In 2012 and 2013, Black Falcon had also won the race in Dubai, then under the “Team Abu Dhabi by Black Falcon” banner.

The team is extremely happy to come back to Dubai and win.

The race weekend started off smoothly for the #2 Black Falcon Mercedes, which set the second fastest time in qualifying, but it was a little less satisfying for the #3 Abu Dhabi Racing Black Falcon car that settled for P6, and then dropped to P9 after receiving penalty on Friday’s warm-up session.

Black Falcon’s #25 Porsche snatched pole position in the Porsche Cup class and it lined up 13th overall, while the #26 Porsche ended up fourth quickest and 22nd overall.

A clean start by both Black Falcon Mercedes in Friday’s race helped them maintain their positions and avoid any collisions, but they were both soon on the attack, with the Black Falcon #2 taking the lead after just 1 hour of racing, while the #3 Abu Dhabi Racing Black Falcon had made its way up to P6.

The #26 Black Falcon Porsche had moved into the lead of the Porsche Cup class, while its pole-sitting sister Porsche, the #25, fell back to third in the class.

Both Black Falcon Mercedes continued to push, and after 3 hours of racing, the #2 Mercedes was 25 seconds ahead of its closest pursuer, its sister #3 Abu Dhabi Black Falcon that successfully moved from P6 to P2.

However, a change of fortune was destined for the Abu Dhabi-backed car as it got hit by a backmarker during the third hour and was forced to pit for repairs. The team worked tirelessly to get it back into the race, but the SLS AMG GT3’s chassis was damaged and the car had to be officially withdrawn from the race, ending its hopes of a possible third outright victory in the 24 Hours of Dubai. In the meantime, Black Falcon #2’s advantage had stretched to a full lap, much like the #26 Porsche’s advantage in the Porsche Cup class.

Black Falcon #2 had built up a 2-lap lead in the overall standings just six hours into the Hankook 24h Dubai race, and the #26 and #25 Black Falcon Porsches ran 1st and 3rd in the Porsche Cup class.

There weren’t any considerable position changes at the halfway mark (Hour 12), with the Black Falcon #2 continuing to slowly pull away in the lead, and the two Porsches sticking to the plan as the #26 Porsche held onto first place in the Porsche Cup class, while the fewer-stopping #25 ran fourth in class, up until the 18th hour when it overcame its rivals and moved to second place behind the #26.

Things remained the way they were until the 20th hour, when an issue on the class-leading #26 Porsche forced it to enter the pit garage. Following a super quick repair job by the team, the car was able rejoin the race in second place behind its sister #25 car, before re-taking the lead in the dying stages of the race.

At the end of the exhausting 24-hour race and after 604 laps, which is a new race distance record, Black Falcon’s dominant #2 Mercedes crossed the finish in first place overall, 4 laps ahead its rivals. The two Porsches underlined Black Falcon’s supremacy by taking a 1-2 in the Porsche Cup class, with the #26 finishing first, just 10 seconds in front of the #25 car.

Sean Paul Breslin, Black Falcon team principal said: “The team is extremely happy to come back to Dubai and win. This is a big event for us and we bring the best we can. As for the number 3 car this is unfortunately the result when the race has so many cars all fighting for not so much space, but the guys will be back next year!”.

With three victories to its name at the 24 Hours of Dubai, Black Falcon is now the most successful team in the history of the race.