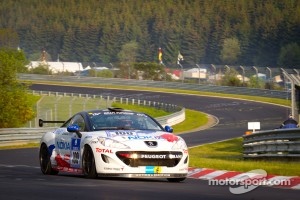 Whoever is successful at the 24-hour race around the Nürburgring enjoys worldwide respect, however, if they have conquered the world’s most difficult race track – the “Green Hell” – twice. After winning in 2010 and 2011 in the diesel classification, Paul Englert, Steven Palette, Guillaume and Julien Rueflin have now clinched a hat-trick for Team Peugeot RCZ Nokia following their triumph in the SP2T class, for 24h special cars up to 1,600 cc capacity with turbocharger, in the 40th running of the classic race. On its 24h debut the brand new Peugeot RCZ Racing Cup with start number ‘100’ covered 131 laps or a distance of 3,324.518 kilometres around the combination of Nürburgring Grand Prix track and Nordschleife.

“This is simply indescribable, I’m lost for words,” said Englert after the race. “In the end our victory was close and anything but easy,” added team mate Rueflin. The French Coupés winning drive really did appear to be an ordeal. “One of our drivers suffered a technical problem during the night,” explained Olivier Perez, General Manager of Team Peugeot RCZ Nokia. “On the way back to the pits several components were damaged which resulted in engine problems. In the closing stages we managed to take back the lead and hold it to the finish.” Another driver of the quartets was weakened by a virus infection – his team mates occasionally drove tiring double stints. Perez: “That’s what I call team spirit – we all pulled together in the same direction.”

The sister car with start number ‘101’ with drivers Michael Bohrer, Jürgen Nett, Stéphane Caillet and Julien Piguet was involved in two accidents during the night and lost valuable time as a result. “That it was still enough for third place at the chequered flag can be put down to the fighting spirit of our drivers who never gave up despite the setbacks,” says Timo Frings, deputy Team Manager.