In the world of Leh Keen, competing in this year's Le Mans 24-hour is another step in a fast-moving parade. After getting a victory at the Sebring 12-hour in the GT Challenge class aboard a Porsche 911 GT3 Cup car, Keen co-drove to a runner-up ...

In the world of Leh Keen, competing in this year's Le Mans 24-hour is another step in a fast-moving parade. After getting a victory at the Sebring 12-hour in the GT Challenge class aboard a Porsche 911 GT3 Cup car, Keen co-drove to a runner-up finish in a Ferrari 430 GTC at the Nurburgring 24-hour in his first start in the classic enduro. Next up: the great French endurance classic, where he'll be driving once again for the Hankook-shod Ferrari team of Horst Farnbacher. 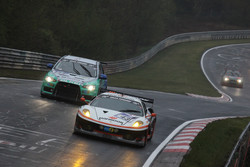 "It's just weird how thing work out," said Keen. "I kind of got to know Horst a little better so I could go to Le Mans. Then we ended up going to the Nurburgring. From a driving standpoint Le Mans should be easier. Now that I've done the Nordschleife, where I was a little intimidated, I'm kind of looking forward to Le Mans."

This may seem like a pretty fast pace for a 26-year-old driver from Dublin, Georgia. But Keen is one of those drivers whose rapid progress has always brought him good rides.

In his first season in the Grand Am's Rolex Series in 2005, Keen co-drove to victory in a Porsche GT3 Cup car at Watkins Glen with Autometrics Motorsport. He scored a victory with Synergy Racing at Mid-Ohio in 2006, then was brought on board the front-running Farnbacher Loles Motorsports Porsche team for 2007.

After a heavy crash at Mid-Ohio caused by a car blocking the track curtailed his first season with the team, Keen came back to win at the track in 2008. A pairing with Dirk Werner in 2009 resulted in a Grand-Am Rolex Series GT co-championship for him and the young German, a season that included another win at Mid-Ohio, one of the most technically demanding tracks in North America.

"I've really just always been into driving cars," said Keen, who taught himself to drive on the dirt roads around Dublin, located in the rolling piney woods country between Macon and Savannah. "I've been doing that since I was 16. I always wanted to progress with the car and develop it a little bit better. The first car I drove was a Mercedes E320. It belonged to my grandfather and was four-wheel drive and had no traction control. It had very good steering angles. I really had some fun with that car."

Most of Keen's friends drove pick-ups, but Keen followed a path laid out by his father, Lehman Keen Jr., a banker with a fondness for powerful Porsches who regularly attended the 24-hour races at Daytona. It was not until he was 13 years old that young Leh got his chance to see a 24-hour race in person for the first time. "I had been begging to go before that," he said of the relatively easy trip to Daytona, "but my mother made me wait until I was older."

Keen's informal training included track days with the Porsche Club North America in his father's equipment, which included a 993 Porsche 911 GT2 Evo that had raced at Le Mans in 1996. "We showed up with the biggest gun on track days and kicked everybody's butt," recalled Keen. A stint at the Panoz racing school at Road Atlanta when he was 18 was the young driver's first formal training.

Not all that many years later, Keen will be trying to complete a remarkable string of podium finishes in the GT category in three of the world's greatest endurance races over a period of four months.

Now a global traveler, it might be more appropriate to talk about the whirl of Leh Keen. The Le Mans event is part of four straight race weekends for the Georgia driver, who is competing in a Mazda RX-8 for Dempsey Racing in the Grand-Am this year. He'll arrive at Le Mans after events at Lime Rock and Watkins Glen, then return to the U.S. for the Grand-Am's Mid-Ohio round.

A relatively young driver, does Keen ever think about driving prototypes? "One thing now, I'm getting content with what I'm doing," he said. "I never had a thing for prototypes. I'm so totally into GT cars. I'm open to the prototypes and I always watched Le Mans in the early 1990's when they had both the open and closed cockpits. But I always wanted to drive the Toyota GT One and the Porsche GT1. And I've always thought that driving an Audi would be cool."

For now, Keen is happy to be driving for Horst Farnbacher, whose program evolved in a new direction after former team principal Greg Loles was indicted on charges stemming from misuse of funds by his Connecticut-based Apeiron Capital Management firm.

Keen credits Farnbacher, who directed chassis set-up and strategy, for a major leap forward in his driving ability. But Keen had to wait until after his Sebring victory before he got a nod from Farnbacher to join the Hankook-backed team, where Dominik Farnbacher and Australian Allan Simonsen will co-drive at Le Mans.

"Dominik can really lay one down when it comes to lap times," he continued. "They wanted somebody who would do the pace they wanted and keep the car in one piece."

Maintaining the pace at the "Green Hell" of the Nurburgring was not necessarily easy, although that's how the Ferrari team advanced to its podium finish with a 430 chassis where added bodywork provided more downforce than is allowed at Le Mans.

"The slow cars are incredibly slow, some of them 80 miles an hour slower," said Keen of the German race that featured 198 starters in a wide variety of GT classes. "It's so dangerous. The worst part was when it went from night to day when the fog was coming in. The track started getting slippery and everybody was flying off left and right."

It was in the Pflanzgarten segment that Keen had his biggest moment on Sunday morning. "I was just being a little more careful. But I was already alongside a BMW and he just whacked the car. It was a huge hit. We were over 100 miles an hour fender to door. I was on the right side so I was set up for the next righthand corner and I didn't go off. But it left a big doughnut on the door."

At Le Mans, Keen's Ferrari will be on the slower end of the spectrum when it comes to speed differentials with the LMP1 and LMP2 prototypes and Le Mans GT1 entries. But he's not overly concerned after his recent experience at Sebring in the American Le Mans Series.

"I've been racing with the (Rolex Series) Daytona Prototypes for so long and those guys use the bodies and will just knock the (crap) out of you," he said. "In the ALMS, the prototype drivers are a little sharper and you know what they are going to do. They don't lock 'em up and dive down the inside."