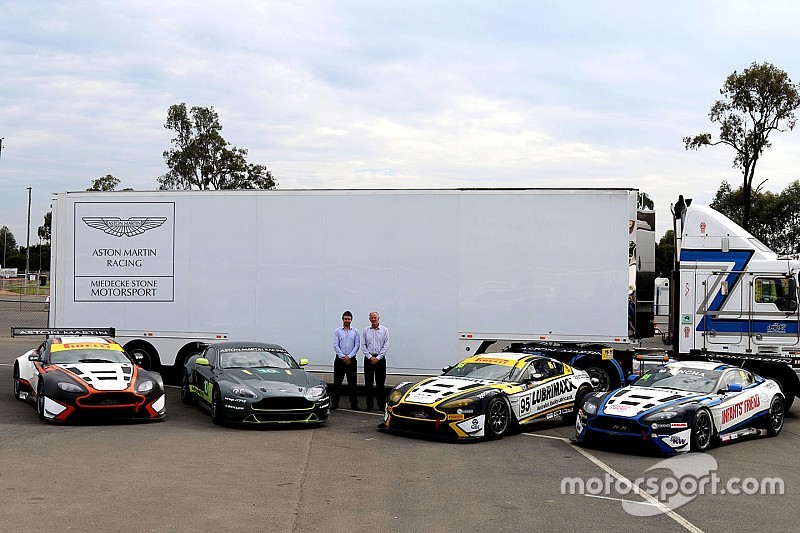 Two Aston Martin Vantage GT3s will be part of the outright class while a Vantage GT4 will be entered in Class C.

“The 12 Hour is one of the four big GT events in the world. It’s an extremely competitive race at one of the world’s best circuits and it is the next step for our team,” Miedecke said.

“I started with a single Aston Martin GT3 with the intention to do some racing with my son, George before I retired, however it has grown into much more than that. Matt Stone ran the car at the Grand Prix event and that went very well – and George showed he was very, very fast in these cars. I already had a very long standing longstanding friendship with Matt’s father Jim Stone. We talked about it and we all had the ambition to do more, so when the very competitive Aston Martins and a very, very large spares package came up from Craft Bamboo Racing we grabbed them.

“We are running a very professional operation, we are a partner team with Aston Martin Racing in the U.K and we have come a long way from early this year.”

Aston got onto the podium in the 2015 edition of the Liqui-Moly Bathurst 12 Hour with Darryl O’Young, Stefan Mucke and Alex MacDowell (Craft-Bamboo Racing).

Although three cars is quite an undertaking for such a grueling race, Miedecke is confident that the organization is up to the challenge.

“It is a big exercise to run three cars however we have a lot of years’ experience between us. The Stone Brothers team has won at Bathurst as well as V8 Supercar and Dunlop Series titles. We know we are more than up to it.

“We have three GT3 cars, but the decision was made to run two cars and have a complete car at the track available as a spare. We have an enormous spares package and world class facilities.

“Additionally, there is an appetite for GT4 and a demand for a car which can win the GT4 class at Bathurst. It is ideal for experienced drivers or young drivers making their first step into a major race like the 12 Hour.

As for who will be driving the cars, that process is ongoing.

“We’re already talking to Australian and International drivers for all three cars, but obviously welcome inquiries from drivers who might be looking to get involved - We know we can field a race winning car and we are serious about running at the front.

“Ideally we would like one GT3 driven by Bathurst experienced Australian drivers and the other for Pros, Australian or International”.

The event will be held on the first weekend of next February, from the third to the fifth.

Showdown in the Czech Republic