Khalid Al Qubaisi made history became the first UAE driver to be part of the Dunlop 24 Hours of Dubai overall winning team when he along with teammates Sean Edwards, Jeroen Bleekemolen and Thomas Jager powered the Black Falcons to a famous victory at Dubai Autodrome a year ago. 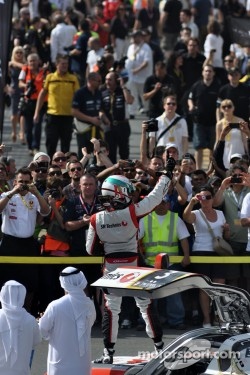 Deservedly the accolades rained down on Al Qubaisi for his role in setting up a potent team to tackle one of the toughest endurance races on the planet and emerge triumphant. However it must be noted that over the years UAE based teams and drivers have done local motorsport proud with some notable performances in their respective classes.

This year Al Qubaisi has again assembled a formidable squad, this time with two Mercedes SLS AMG GT3 cars flying the Team Abu Dhabi by Black Falcons colours with a clear intent of claiming the double on home soil, and with their first win under the belt they must start as favourites.

Perusing the 84 car entry list, with a line-up of drivers which include ex-Formula 1 drivers and some of the best GT drivers on the international scene, and among these there are a number of other UAE based teams with aspirations to make their mark in the eighth edition of the Dubai endurance race next weekend on 10,11 and 12 January 2012.

Perhaps the most ambitious and most likely to challenge for overall victory is the AUH Motorsport run Dragon Racing Ferrari 458 Italia GT3 of Leon Price, Rob Barff, Jordan Grogor and Matt Griffin. Barff qualified on pole for last year’s race and the team led until they had a misfortune during the night which forced them to retire.

During November and December they contested the NGK Racing Series with the sole aim to prepare for the Dunlop 24 Hours of Dubai. If any team mean to do the business, few will match Dragon Racing for sheer commitment to the cause.

Dubai Autodrome based Gulf Racing Middle East will run their Lamborghini Gallardo LP600 with Fabien Giroix, Frederic Fatien, Jean Denis Deletraz and former Ferrari F1 driver Stefan Johansson on duty. Few teams can match the experience that this squad exudes and their speed, which saw them claim pole position for the 2011 race, is a known and respected quantity. The squad will also bank on valuable home track advantage.

The team will also be running the Aston Martin Vantage V8, in classic Gulf colours, for UAE GT Championship regulars John Iossifidis and Martin Baerschmidt, who will be joined by Nigel Farmer and Robert Partouche.

The Dubai based Moutran brothers – Ramzi, Nabil and Sami - are NGK Racing Series regulars with vast experience running in conditions that will prevail on the race weekend, they have entered their familiar Memac Ogilvy Duel Racing Seat Leon Supercopa LR and will be joined by James Kaye as they target top honours in the A3T Class.

Multiple UAE champion Lap 57 have entered a Honda for a group comprising some of the best UAE tin top drivers including brothers Omran and Mohammed Al Owais, Umair Khan, Rupesh Channake and Saeed Al Mehari. The team has valuable experience at Dubai Autodrome and could be the surprise package in their Class.

Emirati driver Basher Mardini has been drafted into the LV Motorsport team and will campaign a Porsche 997 Cup with Claus Donnerstag,Thomas Raldolf, Jannik Larsen and Michael Holden.

Around four hundred racing drivers will descend on Dubai for the weekend of 10, 11 and 12 January and among them are a host of UAE based drivers and teams who will fly the country’s flag with pride and after what should be a tightly contested 24 hours race there is a very good chance that the red, white, green and black flag will flutter above the top step of the podium at Dubai Autodrome.