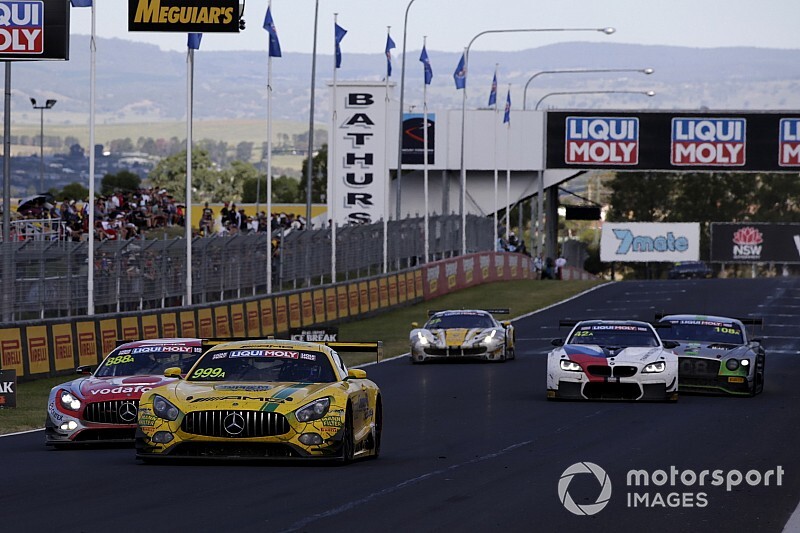 The Kiwi put in a charging drive across the final stint of the race, after pitting for fresh rubber during the final Safety Car a half hour from the end.

He then engaged in a thrilling battle with fellow Mercedes driver Raffaele Marciello, whose tyres were at the end of a double-stint, the GruppeM car grabbing the final spot on the podium by just two-tenths.

The stint took its toll on van Gisbergen, though, who collapsed with cramps after climbing out of the Vodafone-backed AMG GT3.

While the three #888 drivers regularly ran without a cool suit throughout the day, team boss Roland Dane said he thinks it was the intensity of the final stint that played the major role in van Gisbergen's post-race fitness.

"He sounded okay at the end, I think he was just knackered," Dane told Motorsport.com.

"He sweats a lot anyway, even with a cool suit.

"I think it was just the intensity. My experience of him is when he gives his mental all like that he's pretty drained. I think that was the case today."

Van Gisbergen detailed his fitness woes following the race, claiming it was the worst he's felt in a racing car.

“As soon as I crossed the line, you obviously give up and the pain set in and you just realise how hot you are,” he told the official Supercars website.

“It didn’t affect me when I was driving, but as soon as I stopped I felt what I’d just put myself through.

“I was just trying to stretch my legs out, I was cooking as well, but just my legs.

“It’s a bit of a blur, but all of our guys, a few drivers and stuff, I can’t thank everyone enough.

“The medical team were right there, pouring water on me and making all the right things happen.

“As soon as I got in the ice bath I cooled down and felt fine. But just the cramping was the worst.

“I’d never felt that bad in a racecar before. It was tough.”

Being in contention for the podium came after a rollercoaster race for the #888 entry, which struggled for pace for much of the day before 'finding the sweet spot' with the Pirelli rubber and making those late gains.

"We didn't really have any car speed until the last couple of hours, the last three hours really as the track came to us," explained Dane.

"You're not allowed to tune very much in these pitstops, so you're really messing around with tyres, trying to find the sweet spot. We've never worked with this tyre before, it's a different tyre this year, so we've probably got an information deficit compared to the European teams.

"At the end of the day we were able to tune better for the last part of the race than some other people."

Click here to watch full highlights and unique interviews from the 2019 Bathurst 12 Hour.