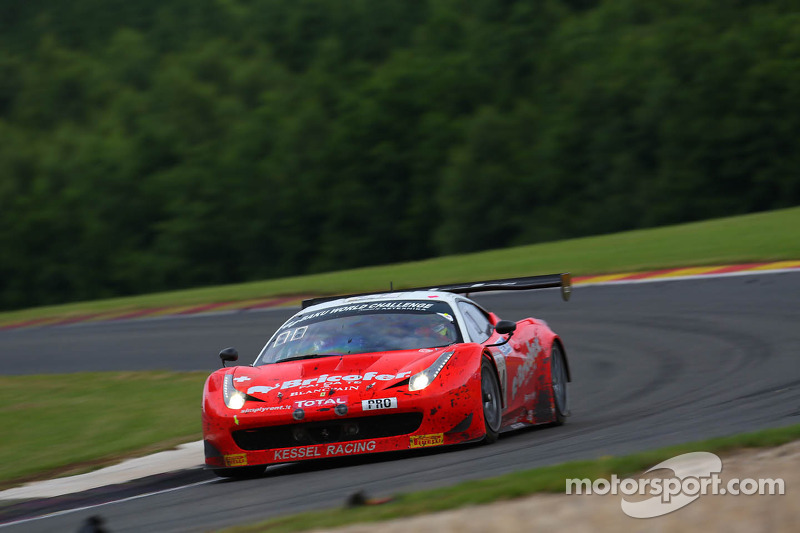 Season finale will be a special 1000kms/maximum 6-hour test

The 2013 Blancpain Endurance Series season comes to a nail-biting and tense conclusion this weekend at Nürburgring, Germany. The Blancpain 1000 – a special 1000kms/maximum 6-hour test at the fabled venue, in the Eifel Mountains, will create this year’s champions in both the Pro Cup and Pro-Am categories to join the already settled Gentlemen Trophy winners. The world’s most competitive GT3 competition – the Blancpain Endurance Series, is ready to provide a thrilling and unforgettable climax to a thrilling season of racing.

In the three year history of the Blancpain Endurance Series there has never been a more open and unpredictable season. The conclusion to this year’s edition sees a remarkable 11 entries still mathematically capable of taking the Pro Cup drivers crown. With as many winning manufacturers from each of the four rounds already held, the destination of the 2013 titles is almost impossible to predict.

Points will be awarded on an enhanced basis for this maximum six-hour/1000kms extravaganza. Amazingly, with 33pts for the win it ensures that heading in to the race, challengers from 15th position in the current point’s standings can still take the title!

The top four in the Pro Cup drivers table are covered by a mere three points, showcasing the intense competitiveness of this year’s field. Drivers from Kessel Racing, HTP Motorsport, Belgian Audi Club Team WRT and Marc VDS Racing Team all have significant designs on capturing the drivers title this weekend.

Kessel Racing has led the series from the very beginning after claiming maximum points at Monza in April. After backing that up with a 6th place at Silverstone and a fighting 4th at Paul Ricard, the dynamic driving team of Cesar Ramos (BRA), Daniel Zampieri (ITA) and Ferrari works driver – Davide Rigon (ITA) ensures they arrive at the last round with a slender two-point advantage.

Hot on their heels is Maximilian Buhk (DEU) in the HTP Motorsport Mercedes SLS AMG GT3. The talented young German joined the series at Paul Ricard scoring a strong 5th place finish. But it was at the TOTAL 24 Hours of Spa in July that his series title challenge really took off, when along with team mates Maximilian Götz and Bernd Schneider, he scooped a huge 38-point haul.

Re-igniting their intense rivalry that went all the way to the wire last season, the Belgian Audi Club Team WRT and Marc VDS Racing Team squads will again fight for the title. Just a single point separates the #13 Audi R8 LMS ultra driven by Frank Stippler (DEU), Christopher Mies (DEU), Edward Sandström (SWE) and the #3 BMW Z4 of Bas Leinders (BEL), Yelmer Buurman (NDL), Maxime Martin (BEL). Martin was granted allowance by the BMW factory to race for the Blancpain Endurance Series title rather than in the ALMS this weekend, underlining the Belgians teams’ ambition to take the crown. Edward Sandström has 17 fewer points than his team mates – Stippler and Mies - due to the trio being split between different cars for the TOTAL 24 Hours of Spa.

As well as the driver’s silverware, both of the above mentioned outfits are neck-and-neck in the Teams points table with Marc VDS Racing Team enjoying an eight-point advantage over their fellow Belgians rivals.

Even behind the top-four contenders there are a gaggle of entries that will prove serious threats and mount challenges to their supremacy this weekend. British teams, JRM and Gulf Racing, with a Nissan and McLaren respectively, are within striking-distance should the leading four teams stumble. JRM’s regular drivers Steven Kane (GBR) and Peter Dumbreck (GBR) are joined by Kazuki Hoshino (JPN) as part of the Nismo Global Driver Exchange.

Also with high expectations is Prospeed Competition which took a well-judged victory at the corresponding event at Nürburgring last season. Racing on his home turf is Marc Hennerici (DEU), and he is once again joined by Maxime Soulet (BEL) and Xavier Maassen (NDL) as they attempt a unique German double. This would be especially sweet for the iconic German manufacturer, as the classic Porsche 911 design style celebrates its 50th anniversary in 2013!

Bringing even more variety to the entry list is the welcome return of the Swiss entered Emile Frey Jaguar XK.

The battle for Pro-Am class honour will burn just as intensely as their Pro Cup class counterparts this weekend. Nissan, BMW, Ferrari and Mercedes go head-to-head for glory in this fiercely competitive category.

Original Nissan GT Academy winner, Lucas Ordonez (ESP), has a four-point cushion at the head of the points standings. He just leads one of the 2012 ‘gamer to racer’ graduates and his team mate in the #35 Nissan GT Academy Team RJN car – Peter Pyzera (DEU). The race could become interesting for the British team as their sister Nissan GT-R NISMO entry features Alex Buncombe (GBR), who also has designs on the title and sits just ten points behind Ordonez. Buncombe is joined in the #32 Nissan this weekend by Mark Schulzitskiy (RUS) and Jann Mardenborough (GBR), while popular Belgian racer, Wolfgang Reip (BEL) joins Ordonez and Pyzera.

Sure to mount a serious challenge to the Nissan duo and to try and become double title winners in the Pro-Am class will be Louis Machiels (BEL) and Niek Hommerson (NDL) in the #50 AF Corse Ferrari 458 Italia. The reigning champions will be without their usual third driver – Andrea Bertolini this weekend. However, one experienced Italian driver is replaced by another, as Fabio Babini is drafted in to assist their title quest. AF Corse will also fight for the team’s title, with just a single point separating them from Nissan GT Academy Team RJN.

Always proving to be a significant threat is the TDS Racing BMW Z4 of Henry Hassid (FRA) and Ludovic Badey (FRA). The French duo are within striking distance of their Pro-Am title rivals and proved in the first two races at Monza and Silverstone that even early race problems do not disrupt their capability to get podium positions. Fighters to the end, Hassid and Badey have a real chance of upsetting the formbook in Germany.

Hometown heroes, Black Falcon (Mercedes SLS AMG) and the Russian, SMP Racing team (Ferrari 458 Italia), are still in outside contention for driver’s titles at Nürburgring and will definitely not be dismissed by their rivals. Black Falcon Racing has proved so far in 2013 that with Adam Christodoulou (GBR), Klaas Hummel (NDL) and Steve Jans (LUX), they can be a force to be reckoned with in terms of pace and excellent pit work.

The title may have already been claimed by the impressive SOFREV-ASP trio of Jean-Luc Blanchemain (FRA), Jean-Luc Beaubelique (FRA) and Patrice Goueslard (FRA) but the battles throughout the growing category will be as fierce as ever in Germany.

Having taken three victories from four races, the new champions richly deserve their success but will now be determined to add a suitable gloss to their 2013 campaign success. The other SOFREV-ASP Ferrari 458 Italia raced by team principal Jérôme Policand (FRA), Gabriel Balthazard (FRA) and Maurice Ricci (FRA) has suffered bad luck this season that would otherwise have seen them challenge for the Gentlemen Trophy crown. They are again among the favorites for class success in Germany this weekend.

The only other entry to have won a Gentlemen Trophy class race this season (at Silverstone) is the ARC Bratislava Porsche 997 GT3R team. They will be hoping to accomplish a strong finish to the season with their regular drivers – Miro Konopka (SVK) and Ahmad Al Harthy (OMN) leading the Porsche challenge on home ground.

In addition to all the guaranteed action from the Blancpain Endurance Series at Nürburgring this weekend there will also be a packed timetable featuring multiple races for the spectacular Lamborghini Blancpain Super Trofeo supercars, evocative retro racing with the Classic Endurance Series and a chance to see the F1 stars of tomorrow in the Cooper Tires British F3 International Series.