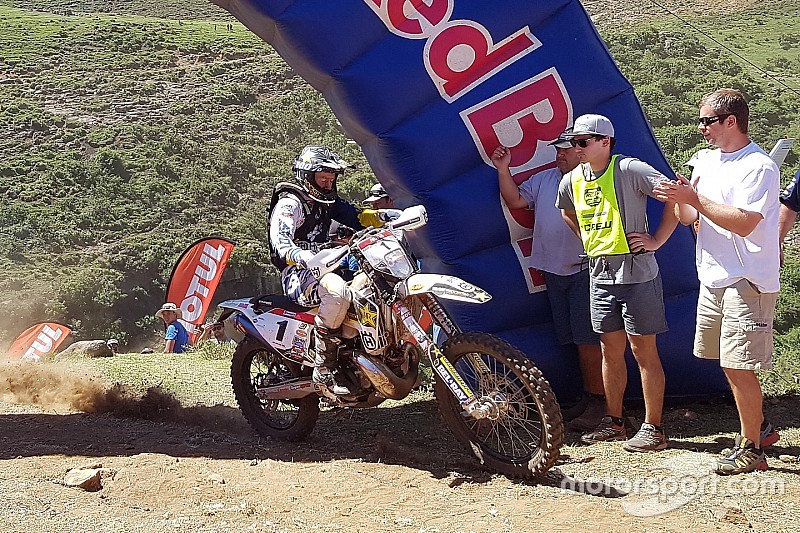 Graham Jarvis finished the longest day of the Motul Roof of Africa event in front of Alfredo Gomez, who closed a gap of 10 minutes.

Jarvis and Gomez battled for the lead during the second half of the 160 km off-road section.

After completing a short city race in Lesotho's capital city Maseru and an individual time trial on Friday, the difference between the two riders was 10 minutes. But the Spanish KTM rider showed an impressive performance during the first half of the race, being able to close the gap.

South African Brett Swanepoel started first at 6am, followed by Jarvis four seconds later. The two rode together during the first quarter of the race until Jarvis took over the lead.

The British veteran saw Gomez appearing in his mirrors and just past the halfway mark the Spaniard entered service point Ha Rapokoloane first, just in front of Jarvis.

Once the finish at Bushman's pass came in reach, Jarvis took the lead and crossed the line 33 seconds ahead of Gomez. "It has been a long day and it was pretty torturous. There was no rest at all, most first and second gear riding," Jarvis commented after being on his motocross bike for over eight hours.

"I managed to get in front of a bunch of drivers before the technical stuff started. Alfredo and I managed to pull a gap and we helped each other navigating. Probably we'll be riding together tomorrow, what might end with a sprint to the finish."

Gomez impressively made up ground in the first half of the race and explained what it made so difficult to get to the finish.

"I pushed a lot at the beginning and was riding very well until the service point," he said. "After that it became difficult, especially in the last hour when I ran out of water and my muscles felt destroyed.

"But I'm very happy that I was able to catch up with him [Jarvis] and tomorrow I'll try to do it a bit differently in an attempt to win the race."

The third and final day of the competition starts on Saturday at 6am, again from Bushman's Pass and is slightly shorter.