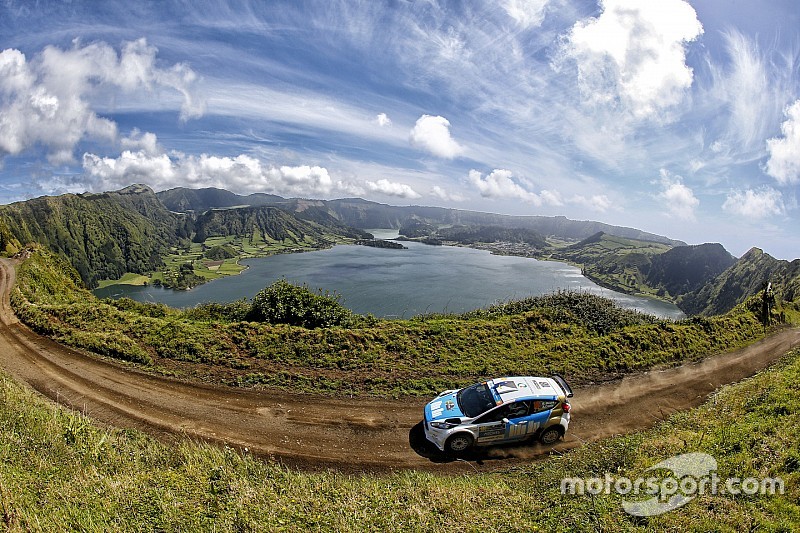 On the first run through Graminhais, Kajetanowicz suffered a front-left driveshaft failure on his Ford Fiesta R5 that cost him three minutes to Lukyanuk, which dropped him to fourth overall as he was forced to run rear-wheel drive only until lunchtime service.

That promoted Moura in his similar Ford Fiesta R5 to second, ahead of Acropolis victor Ralfs Sirmacis’s Skoda.

But then the event was turned on its head again, as Lukyanuk – who looked on course for a routine win – suffered a turbo issue and lost his 25s lead to Moura with two stages remaining.

A similar issue had afflicted him last time out in Greece, and he raged: “I hate it when same things happen twice. It shouldn’t happen.”

But despite dropping to 42.7s behind Moura, Lukyanuk regained 21.2s on the second run through Graminhais – despite his “crazy turbo” – meaning they went into the final Tronqueira test 21.5s apart. Rain showers also complicated matters.

However, the 37-year-old Portuguese driver responded by going quickest in the final stage, securing his career-first ERC victory.

Sirmacis went out when he damaged his car’s steering on the morning’s Tronqueira stage, which promoted Kajetanowicz back to third, with his driveshaft issue fixed for the afternoon stages.

Hungarian David Botka got ahead of both Jaroslav Orsak and Pedro Meireles in the final run to secure his best ERC finish in fourth, as local drivers Luis Rego and Jose Fontes completed the top eight.