Why Colton Herta isn’t aiming for F1: “It just bores me” 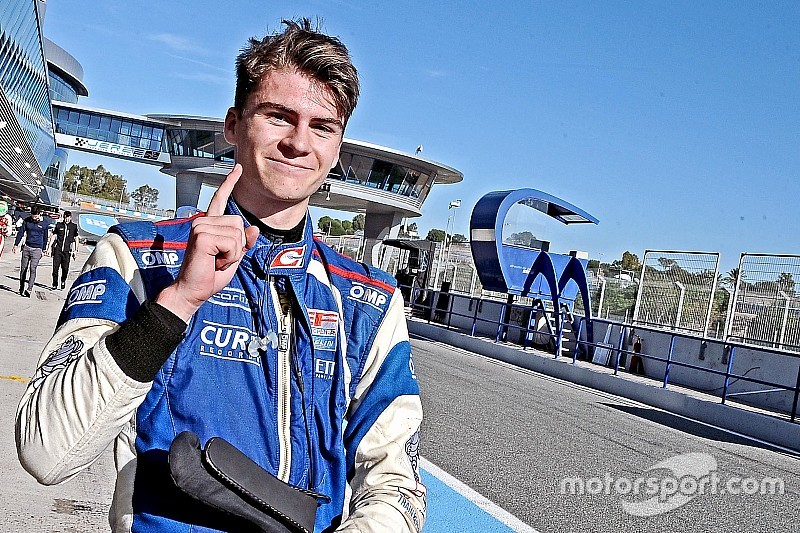 The 16-year-old has been a regular winner in Europe for the past two years, and is described by team owner Trevor Carlin as “a great driver and a great kid.” Yet Herta tells David Malsher that he has his sights set on DTM or IndyCar.

Finishing third in the EuroFormula Open Championship with four wins, replicating your results in MSA Formula 4 in 2015 – was that something that pleased you or were you expecting to contend for the title straight away?

I am happy overall, yeah. I think we struggled with pace at the beginning of the year, but then just like last year we scored the most points and the most wins in the second half of the year.

For those who may not be aware, can you explain EuroFormula Open cars?
It’s a Formula 3 tub, but you can’t add or customize parts. It’s all spec – spec shocks, spec dampers, spec aero – whereas in European Formula 3 you can do a bit on the car, things that we can’t. Then there’s maybe only 10 more horsepower than we have, but the engine has more torque and the tires are different. They run on Hankooks and we were running on Michelins. But the lap times are very similar.

So EuroFormula forces you to adapt your driving style to suit the car, rather than being able to tailor its handling to suit your style?
Yeah, I’d say so.

A lot of Americans struggle when they’re thrown into the European scene. Is that because the tracks are so different? Or the racing is more aggressive?
Yeah, there are examples of people who grew up racing in America who then can’t get the job done in Europe and I’m not sure what the difference has been for me. I mean, the competition level is deep over there and maybe going over to Europe early, when I was 14, is what’s helped.

It’s good that EuroFormula races on so many tracks used by more senior series so it means each step you take up the ladder, there’ll be more race weekends where you can just focus on being fast rather than learning the track.
Yeah, that makes it much easier in the long run. In future series, you get less and less track time, so I’ll be in a much better place than the guys still learning the tracks. I can get on with tuning the car.
And I really like a lot of those tracks, too. I won both races at the Red Bull Ring, so maybe that contributes to why I like it, but I did really enjoy racing there. It’s in an awesome setting in the Austrian hills, and it has a good sequence of corners as well. The downhill left-handers, you’re pulling a lot of G through there; really cool stuff.

You tested an Andretti Autosport Indy Lights car last month. What did you think?
Yeah, I tested at Sebring and Gateway and it’s a quick car, fun to drive. Trying the oval was more fun than I thought it would be. I thought it would be tougher. I see it as fast corners over and over again, so not too different from what you’d find in fast corners on a road course. It’s more about getting the car set up to where you want it, and there’s way more you can do to a Lights car than a EuroFormula car so we got into a lot of setup work. Like I say, it was fun.

Has your father drilled into you the importance of understanding the technicalities of racecars? He was known as a racer who had good technical knowledge?
Yeah, but I’ve always liked to learn about that as much as possible, going right back to when I was in karts. It really helps when altering setups, to be able to suggest things to your engineer instead of just saying ‘the car’s doing this, can you fix it?’

Can I assume your ambition is to remain in Europe for as long as you can find sufficient money?
Hmmm, well, there are a few options for 2017. Indy Lights is one. There’s also European F3. And there’s also another year of EuroFormula. But there’s a big budget jump from EuroFormula to Formula 3, so if I had to stay in EuroFormula and go for the title, then that’s OK. I’m hoping to know within the next two weeks. It’s all about getting sponsors lined up.
My Dad always says that I have plenty of time, and yeah, I can spend a second year in a series – I’m not really rushed. But I want to get paid and be a professional driver as soon as possible.

So is your progress to Formula 1 therefore dependent on getting on a ‘young driver’ scheme?
Well actually my goal isn’t Formula 1… I never really had that interest – especially these past seven years when one team has dominated. It seems that if you get the wrong drive, you’re basically stuck forever in the middle of the pack, fighting hard just to get a point or two, and never being noticed by the big teams.
It just bores me. No matter how good a driver you are, if the guy ahead is in a better car, he can pull away by 20 seconds before his first pitstop.
So ideally, a ride in DTM or IndyCar is what I want. They’re both more competitive than Formula 1 and you have to work harder for the wins because everyone around you has a car of very similar performance.”

So can I ask you why you’re racing in Europe?
It’s better for learning, because the fields are bigger and deeper. I learned more from my first year in Europe than I did in my first year racing in America. I was 14 when I moved over there, and it matured me greatly, faster than I would have done here. So I think it was the right choice to take and I’m excited by what could come next.