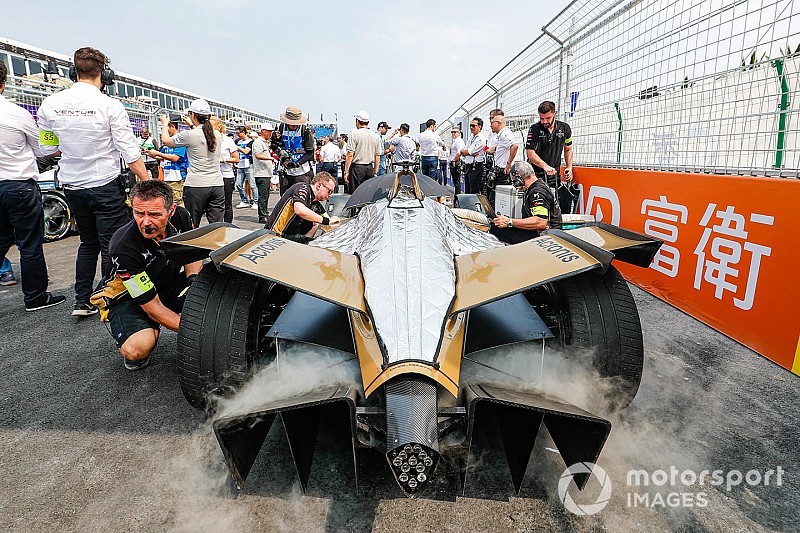 Spark, which built the Gen1 and Gen2 FE cars, will make a set of spec parts for each XE car to be based around, with competing manufacturers able to build their own silhouette bodykits of road-going SUV models in certain areas.

The parts that Spark will produce are the XE car’s tubular steel frame, suspension and dampers, braking and steering system, as well as the crash structure and roll cage.

The bodykit areas that manufacturers can shape have been defined as “select areas of exterior bodywork”, according to an XE statement.

These include the engine cover, side skirt, lights and front and rear bumpers, while the powertrain areas that are open for manufacturer development are limited to the motors and inverter on each car.

“Starting the production and build process for a car is always special and a defining moment when getting a new series off the ground,” said XE and FE co-founder Alejandro Agag.

“I’m glad to be once again taking this journey together with Spark Racing Technology - just as we did for Formula E.

“Working with trusted partners and people like Theo [Gouzin, Spark technical director] and the team at Spark allow us to drive forward with preparations and offer race-ready cars to the teams, before giving them the freedom to develop their own components.

“I can’t wait to see the prototype in action and the first public demonstration this summer. Keep your eyes peeled for more news coming from Extreme E in the coming weeks.”

A prototype test of XE machinery is set to take place in July 2019, and competing teams will take delivery of the initially-produced cars – currently set at a maximum of 12 – in March ’20.

Group testing of the cars is slated to take place in the summer of 2020, before the first race that is scheduled to occur in January ‘21.

The five locations earmarked for the first XE events include the Arctic, the Himalayas, the Sahara desert, the Amazon rainforest and islands in the Indian Ocean, with the paddock facilities hosted on the former Royal Mail Ship St Helena.

FE will operate the XE series, which was officially launched in January.

“Spark is thrilled to engineer the all-new electric SUV for Extreme E,” said Gouzin. “Our team is privileged to be co-pioneering this new competition focused on e-mobility.

Extreme E winner to be kept secret for months

All Extreme E teams to feature one male, one female driver

All Extreme E teams to feature one male, one female driver