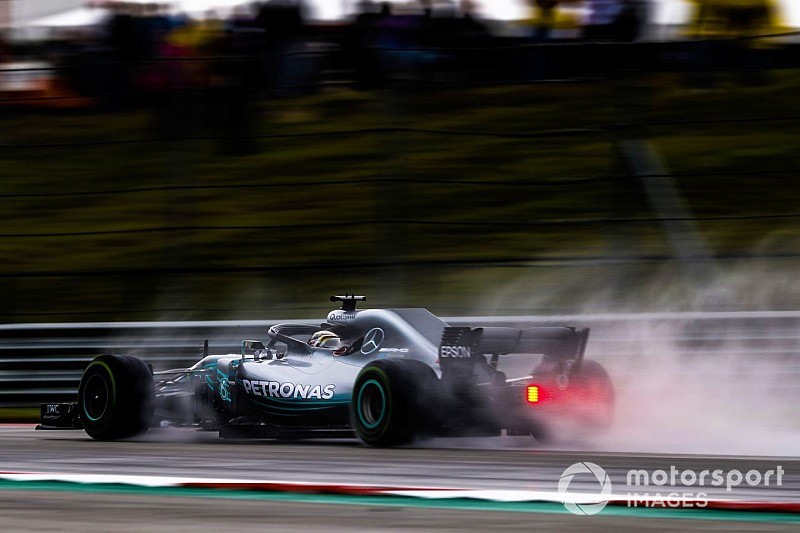 Mercedes's Lewis Hamilton topped the times in a rain-hit second Formula 1 practice session at Austin on Friday afternoon ahead of this weekend's United States Grand Prix.

The Frenchman ran on a fresh set of intermediates and reduced the deficit to Hamilton to just 1.012s at the end of the session.

Red Bull's Max Verstappen was third quickest ahead of Fernando Alonso, Nico Hulkenberg and Brendon Hartley. The Toro Rosso driver ran more laps than anyone else – 19 in total.

Hamilton's title challenger Sebastian Vettel was only 10th quickest, nearly five seconds behind Hamilton. Ahead of him were his Ferrari teammate Kimi Raikkonen, Stoffel Vandoorne's McLaren and the Sauber of Marcus Ericsson in seventh.

Four drivers didn't venture out at all in FP2: they were Daniel Ricciardo, Romain Grosjean, Kevin Magnussen and Valtteri Bottas.

Half an hour before the start of second practice, heavy rain fell across the Circuit of The Americas, causing deep puddles to form across the track. The torrential weather continued into the session and no cars ran for the first 47 minutes.

With more rain forecast for qualifying on Saturday, most teams opted not to run in the conditions, preferring to save their wet and intermediate tyres for tomorrow.

A few hardy spectators hung around at the track in the hope of seeing some running and they were rewarded when Brendon Hartley took to the track in his Toro Rosso 47 minutes into FP2.

Hartley was then accompanied by Stoffel Vandoorne in his McLaren (who completed 10 laps in total). Both drivers didn't run this morning as their cars were taken over by Sean Gelael and Lando Norris respectively.