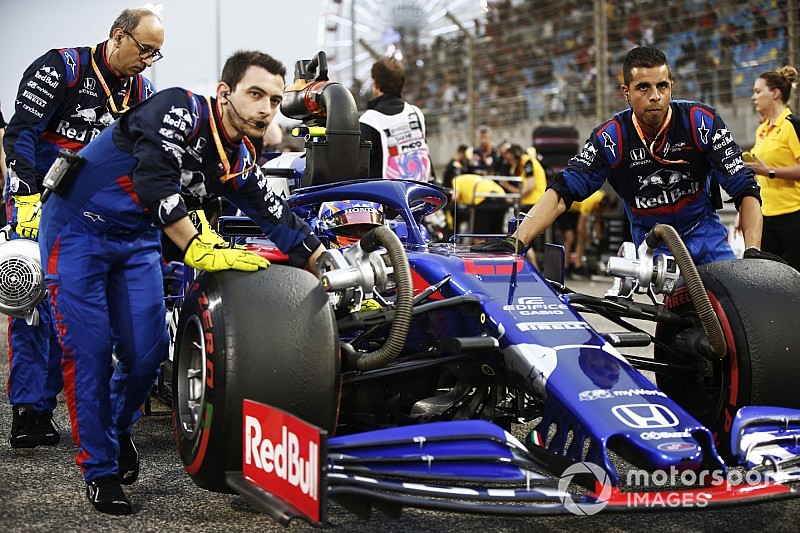 Alex Albon says driving through a shower of sparks felt like "a fireball" at the start of the Bahrain Grand Prix, in which he scored his first Formula 1 points.

The Toro Rosso rookie benefitted from Renault's late double-retirement to finish ninth and bag two points on only his second F1 start.

His race had started being boxed in at the first corner, and he was following Lance Stroll out of the first sequence of turns when the Racing Point produced a huge trail of sparks after picking up damage from contact with Romain Grosjean.

"I was a bit too safe around me [at the start], there were some people braking earlier, and I kind of reacted to it and braked with them," said Albon.

"So Turn 1 I was too safe and then the exit of Turn 3 it was like a fireball coming into my face and it kind of distracted me.

"I was caught out and then he braked and I was like, 'Has he got damage, what's going on?'."

Albon said he needed to take evasive action because the sparks were not just a visual distraction.

"It was really hot," he said. "You could feel the heat.

"It did not worry me, but it was a new experience. I thought 'whoa, I need to get out of this'.

"I actually lost a position I think, because I was avoiding him, trying to avoid all the 'flames'."

Once clear of Stroll's broken Racing Point, Albon had a race in which he "felt like every stint we were fighting with someone".

He went wheel-to-wheel with the Alfa Romeo of Kimi Raikkonen and passed his Toro Rosso team-mate Daniil Kvyat and the Haas of Kevin Magnussen, which meant he was well-placed to profit from Renault's quick-fire retirements.

"I think there was more in it," Albon reckoned. "It's a bit of shame with the start, because I think if I had a bit of clean air, we could have done a lot better.

"But I am happy with performance. First thing I need is to qualify a bit better, get into Q3, because I think we deserve or we can do that."

Albon said he enjoyed the grand prix as he had not been able to battle with other cars properly in the season opener in Australia.

He also admitted that he did not have much of an idea of what he was fighting for because the race was so hectic.

"I am surprised, you do your race, but everyone is pitting, or exiting the pits, and you don't know who you're fighting really," Albon said.