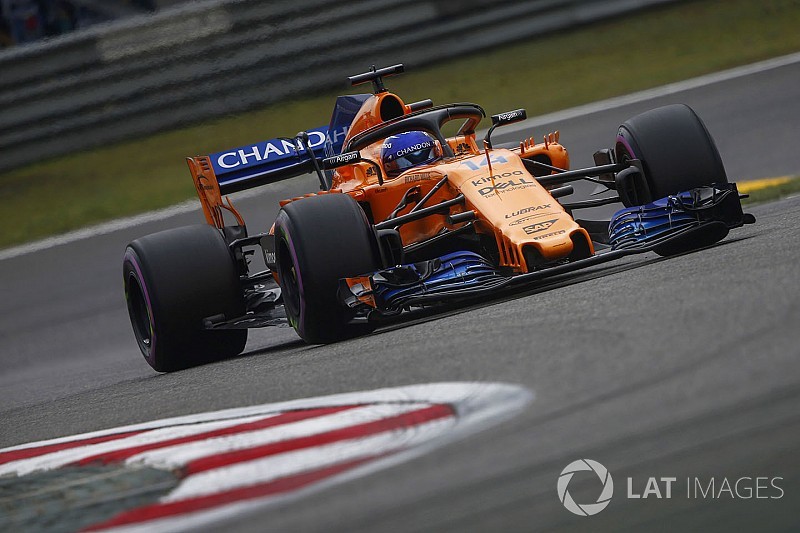 Fernando Alonso admitted his battle with Sebastian Vettel in the Chinese Grand Prix was "not fair" because of the damage the Ferrari driver had on his car.

McLaren driver Alonso was able to erase a six-second gap to Vettel in the closing stages of the race and pass the German down the inside of Turn 1 to take seventh position.

Vettel had dropped down the order after his crash with Red Bull's Max Verstappen, the Ferrari showing visible damage on the right side of the floor area.

Alonso conceded the pass was not a fair reflection of the cars' actual respective pace.

"It was good. Obviously it was not a fair fight because Sebastian had damage on his car and I was a little bit quicker on the corners," said Alonso.

"I was surprised when I saw a Ferrari not going too fast at the end. I asked what was the problem and apparently he had damage on his car so he was struggling a little bit on the corners.

"He was running very wide in the corners, so in the first opportunity I saw the door open and went for it.

"And in the end at one point the track finished so he kept going until there was grass, so you need to back off at one point."

Vettel went off the circuit after running out of room when Alonso overtook him, but the German said he was just happy to make it to the end of the race.

"I was very vulnerable so he could have passed me another time," Vettel added.

"I think the way he dived in was now or never, and I obviously had to back off, otherwise we would have just crashed. I was just happy to finish."

Alonso, who has scored points in all three races so far this year, believes he could have enjoyed a better result if not for the safety car, which was deployed right after he had made his only pitstop.

"We were executing a one-stop strategy a little bit differently, with a very long first stint that I think would have paid off in the end, but I think the safety car opened the opportunity for everybody to put a new set of tyres and that was a shame for us.

"At the same time I think it was a great battle and we were able to overtake. It was a nice feeling and great result for the team again."

Hamilton "not in the best place" in China, says Mercedes