Alonso did not leave "1mm" anywhere for P18

Fernando Alonso said he did not leave one millimetre anywhere on “one of the best laps in my life” at Suzuka to secure 18th in Formula 1 qualifying in Japan. 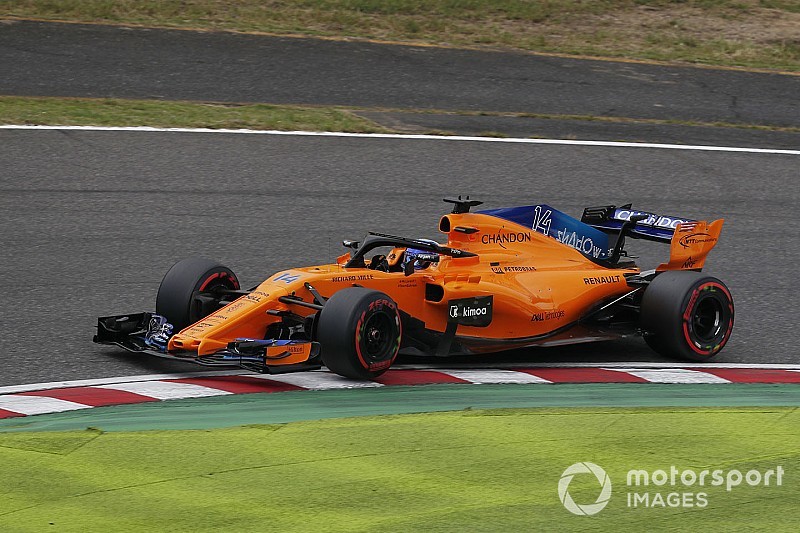 McLaren's terrible 2018 season continued with Alonso and Stoffel Vandoorne only outqualifying the crashed Sauber of Marcus Ericsson ahead of the Japanese Grand Prix.

Alonso said the MCL33 was not handling badly, but rather just slow as he lapped 1.8s off the pace but almost half a second clear of his teammate.

"Today, the balance was good, the lap was good," he said. "I was convinced when I crossed the line we could be in Q2 easily. It probably has been one of the best laps I did in my life at Suzuka.

"I saw the onboard in the engineers' room. If you have a chance, watch it. Because there is not 1mm in any corner, on entry, on exit, on the kerb.

"It was maximum risk."

While McLaren has struggled for performance this season it has usually had the ailing Williams team behind it as a buffer to the back of the grid.

However, in Japan, McLaren was the outright slowest team.

Alonso said: "I think in Russia also we were underperforming a little bit and we just executed a better strategy and finished in front of the Williams.

"We were not with the pace, even compared to them. No surprises here, even five days after Sochi we were running here with exactly the same car.

"We knew that this could be painful as a weekend."

Alonso reiterated his belief that a "lack of development" is causing McLaren's pain to continue to the end of the year.

"We constantly see new parts to the midfield guys every weekend, we see their cars and pictures you guys take," said Alonso.

"We see updates to everyone and from probably Spain we don't have any. This is probably the reason why. Also the circuit itself – it probably has characteristics that show our weakness."

Tost: No reason to replace Hartley "if he continues like this"