Renault test driver Fernando Alonso was happy with his day at Silverstone driving for Jagaur and was third fastest, quicker than Jaguar driver Pedro de la Rosa. Alonso drove for Minardi last season but opted for a test role with Renault for 2002.

Renault test driver Fernando Alonso was happy with his day at Silverstone driving for Jagaur and was third fastest, quicker than Jaguar driver Pedro de la Rosa. Alonso drove for Minardi last season but opted for a test role with Renault for 2002. The young Spaniard is considered very much a future star of F1, impressing many with his performance in the recalcitrant Minardi, and was testing with Jaguar to compare against regular test drivers James Courtney and Andre Lotterer. 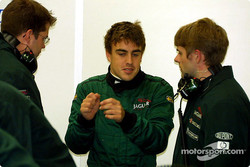 Fernando Alonso.
Photo by Mark Gledhill.
"Achieving the third fastest time when there were 16 cars on the track and in a car that is usually one of the slowest is something to be pleased about," Alonso said. "The more F1 cars I test the better for me. This is the fifth or sixth car which I have tried out and it went pretty well. If they (other teams) want me that is good for me. In the past other teams have been after me and that has meant I have been re-valued as a driver. The only difference is that this time I have actually driven the Jaguar and that is why they have made all this fuss."

Although there has been no suggestion that Jaguar are looking to replace either Eddie Irvine or Pedro de la Rosa, inevitably rumour has been stirred by Alonso testing for the team. He dismissed any possibility of taking a race seat: "I don't think it will affect my future," Alonso said. "At the moment I am only thinking about Renault."

The car that almost propelled Minardi into extinction