Fernando Alonso thinks spending last year as test driver to Renault has given him a slight advantage heading into 2003, as he is already used to the team. Twenty-two-year old Alonso impressed many in his debut year on-track competitively with ...

Fernando Alonso thinks spending last year as test driver to Renault has given him a slight advantage heading into 2003, as he is already used to the team. Twenty-two-year old Alonso impressed many in his debut year on-track competitively with Minardi in 2001 but he opted to take the test role with Renault last year. The Spaniard is now ready to get back into the action. 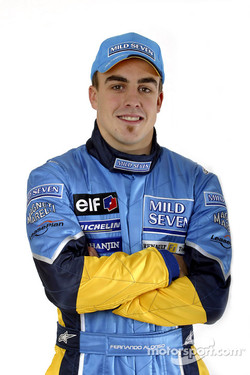 Fernando Alonso.
Photo by Renault F1.
"Having tested for a whole year with the team there is some advantage for me going into this new season," Alonso said at the launch of the R23 in Switzerland. "It's a big team and you have to get used to it. I have got to know the people and the car perfectly. I am ready 200 percent."

Renault have opted for the Friday test session on race weekends, rather than testing throughout the year, a decision that surprised many. Alonso is happy with the situation: "The decision to test for two hours on Friday mornings is good for me as there are some tracks I would like to spend some more time on and I think that's good for the team too," he explained.

The new R23 will be tested this week, after an on-track launch at the Paul Ricard circuit in France. Alonso is confident of an improvement on last year: "We will only find out how good the car is after testing this week, but I am confident as the team has been working very hard," he said. "We were fourth last year and I think we should be better than that this year."

Engineering focus for Jaguar in 2003