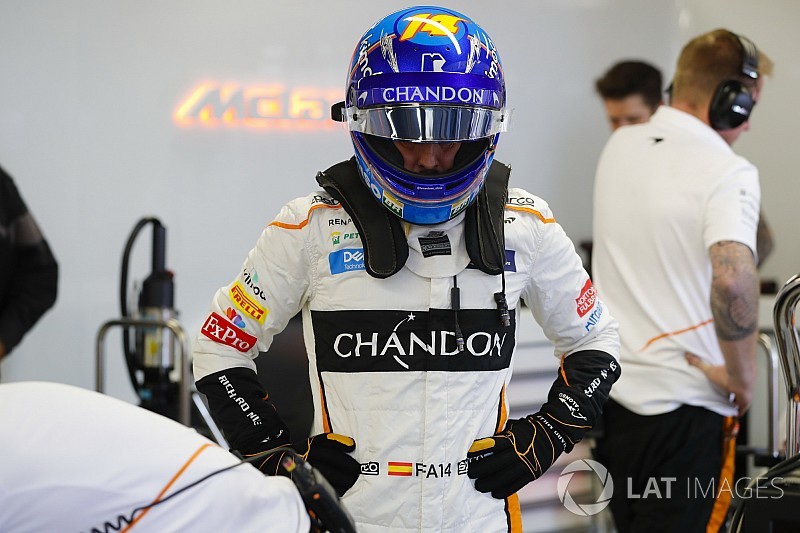 Fernando Alonso admits he and McLaren were “disappointed in a way” to see Red Bull's blistering pace in Monaco, given that the two teams' Formula 1 cars are both powered by Renault.

McLaren switched to Renault engines in the off-season after three miserable seasons with Honda, and Alonso said at the start of the season that the Woking-based team should be targeting the performance level of fellow Renault customer Red Bull.

But while the team has become a reliable points-scorer since the switch, Red Bull has remained well out of reach – and this was particularly evident in Monaco qualifying, at a track that emphasises chassis performance over engine power.

Alonso was happy to qualify seventh thanks to a 'coin-toss' set-up, but was still exactly 1.3s slower than the Red Bull of Monaco Grand Prix pole-sitter Daniel Ricciardo.

"Disappointed in a way because we have the same power unit and we should be at that level," Alonso said after qualifying.

"But at the same time we knew from very early in the year that we are not yet at that level - but we will try to be as soon as possible."

Alonso added that Red Bull's strong showing at the street circuit was expected, in part due to the RB14's performance in the low-speed third sector in Barcelona.

"We knew more or less that the Red Bull was quite strong here, and favourites in a way," he said. "Also for Mercedes and Ferrari, Red Bull was the team to beat here. It was not a surprise.

"Obviously we've been chasing that pace all year long. We identified, we know which areas we need to work to be on that pace.

"I think the last sector in Barcelona we realised that Monaco would be quite strong for Red Bull, and we are not on that pace yet."

"Like Fernando said, I don't think it's any surprise," added teammate Stoffel Vandoorne, who qualified in 12th place.

"But on the other side we have a clear direction for our team in terms of where the car needs to improve.

"I think the past couple of weeks we've made a small step forward, and I think there's a big push now in the factory to make even bigger gains over the next few weeks."