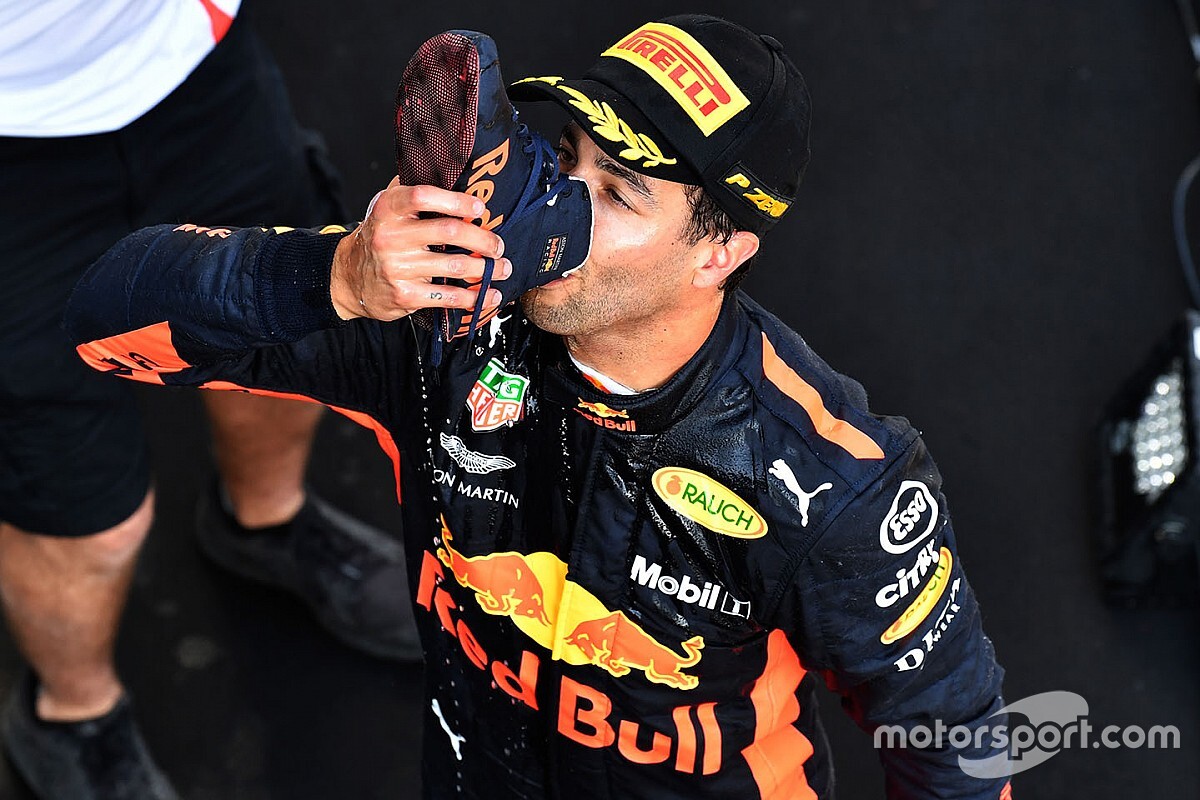 Australian cricketer Andrew Tye says he will follow in the footsteps of Formula 1 star Daniel Ricciardo and perform a shoey if his Kings XI Punjab team wins the 2019 Indian Premier League.

Ricciardo is credited with giving the shoey celebration – which has its origins in Australian surfing culture – worldwide popularity, thanks to his antics on the F1 podium over the past few years.

Several other F1 drivers and even actors, including Sir Patrick Stewart, have performed a shoey on an F1 podium, while Jack Miller did likewise following his first MotoGP win at Assen in 2016.

Tye, who was last year's leading IPL wicket taker, says he will consider bringing the shoey to cricket if Kings XI Punjab claims its first league title this season.

"I'll probably look into it at some point," Tye told KXIP.in. “Maybe if we win the IPL this year..."

Tye said he is a big fan of Ricciardo’s overtaking prowess and even got to meet his fellow Perth native during a chance fan encounter.

“Some of the overtaking moves Ricciardo has done have been just incredible,” he said.

“I briefly met him once but it was more of a fan moment asking for a selfie so that was it. I haven't had a proper chance to meet him.

"All the best to him this year in the new team [Renault]. It's going to be hard but I just hope he keep fighting and keeps the Honey Badger ruling supreme!"

Tye has been following motorsport since a very young age, with memories of Michael Schumacher and Damon Hill’s infamous 1994 title-deciding crash fresh in his mind.

But it was only in 2016 when he got to have a closer view of the action, when he was invited to the Mercedes garage to follow the British Grand Prix qualifying live.

"I was extremely lucky," he recalled. "I was in Lewis Hamilton's garage watching all the crew doing their work and stuff.

“I had one of the team headsets on so I was listening to all the team radio and everything. It's actually incredible insight into how everything works and how a qualifying session like that unfolds."

Tye’s love for motorsport extends well beyond F1 and MotoGP, with the Australian admitting that he’s also a fan of the homegrown Supercars series.

"My [road-going Mercedes] car is pretty quick but the Ford and Holden battle has reigned throughout the years, it's something that I have always watched as well."

Red Bull form "cannot be worse" than in Bahrain - Verstappen