US F1 Team announces Argentinean Jose Maria Lopez for the 2010 Formula One season.

Argentinean Jose Maria Lopez has been officially presented as one of the drivers for the new US F1 Team on Monday afternoon in a press conference that took place at the presidential house of Argentina after a meeting with President Cristina Fernandez de Kirchner. 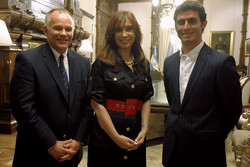 Lopez, 26 years old and former Renault F1 Team test driver, reached an agreement with Peter Windsor, US F1 Team Executive Vice President, on Friday after several weeks of negotiations that ended when the Argentinean presented the sponsorship guarantees of eight millions dollars that will be given to the team based in Charlotte, North Carolina, USA. Of those eight millions dollars, two million will come from the government of Argentina through the Secretary of Tourism.

That's the reason why the presentation of Lopez was held at the Casa Rosada, in Buenos Aires, with the presence of US F1's Windsor, along with Florencio Randazzo, Ministry of Internal Affairs; Enrique Meyer, Secretary of Tourism; Claudio Morresi, Secretary of Sports; and Carlos Garcia Remohi, President of the CDA division of the ACA (Automovil Club Argentino).

Windsor, who postponed his return to the United States from Friday to Monday so he could be present at the press conference, showed that he was very happy with Jose Maria Lopez as driver of the new Formula One team. "I believe that Lopez has won more races in these three years than any other driver in the world", he said in reference to the success experience by Lopez racing in Argentina -- where he was champion of TC2000 Series in 2008 and 2009 and of Top Race V6 Series also last year plus he finished as runner-up in Turismo Carretera Series.

Windsor proved to be very comfortable in Argentina. The television commentary/journalist who has covered F1 events is a close friend of former Argentinean driver Carlos Alberto Reutemann, runner-up champion of Formula One in 1981 racing for Williams and current Senator in his home country. Reutemann was another important part in the negotiations that ended with Lopez as driver of the US F1 Team.

Even in front of the media at today's announcement with stories circulating about a fragile future for the team including an earlier in the day comment from Bernie Ecclestone: "Campos and the US F1 have problems - financial, not technical", Windsor reacted to the ongoing rumors very clearly."We know when the car must be ready. We are working towards that date. There're a lot of stories in the press these days", he said.

The Cosworth-powered Type 1 -- the name of the first US F1 car -- is expected to have be ready on February 20th with the first test around February 25th at Barber Motorsport Park in Birmingham, Alabama. This will be the only private test before the start of the season.

"The hardest part is to convince people to follow you. We have done that. Now comes the fun part", Windsor said about the moment to race. "We're going to take this step by step."

Now that JM Lopez has been confirmed, the US F1 will continue to put efforts into securing their second driver. Several names have circulated in the press corps, but there's no official word yet from the team.

The US F1 Team will make it debut in Formula One, along with three other teams: Campos Meta 1, Lotus F1 Team and Virgin Racing. That's why Lopez believes the team will need some time in their endeavors, a learning curve, before they start to show important results.

"The objectives are important, but we must know which objectives we put to ourselves", he said before adding that "being ahead of the new teams" should be the aim.

"We know that we are with a new team, that is starting from zero, but this is a great team and are working in a fantastic way", Lopez said.

Lopez, who will become the first driver from Argentina to race in Formula One since Gaston Mazzacane in 2001, has been training in Europe during the off-season. First in Austria and then in England. The Argentinean plans to go back to Austria on February 6th to continue his training in a simulator that will allow him to work with the G Force of a Formula One car.

The President Cristina Fernandez de Kirchner, who was not present in the conference, commented in a press release: "The Argentine government is very happy to get behind this exciting new project and we wish Jose Maria and the team all the best for the 2010 season".

After winning in karts all over the world from the age of seven -- Lopez was leading Lewis Hamilton in the world final in Japan when his chain broke -- he switched to single-seaters in Europe in 2001 . He won the 2002 Italian Formula Renault Championship with four wins, five poles and three podiums and in European Formula Renault he scored two wins, two poles and a podium. He dominated the European Formula Renault V6 Championship in 2003 (five wins, eight poles, seven podiums) and in one season of F3000 before his two years in GP2 where he scored scored a win (Barcelona), seven podiums and a pole. As a contracted Renault driver, he also completed thousands of miles in their F1 car, focusing mainly on shake-downs and starts but also completing simulated race distances with compromised set-ups.

Disappointed at not being given the opportunity to race in F1, Lopez returned to Argentina in 2007. His positive, super-professional approach resulted in three championships, 38 wins and 36 pole positions. As a result, "Pechito" -- as is his nickname -- became a hero in his own country and regained the momentum he needed to focus once again on racing in Formula One.

Born in the land of Juan Manuel Fangio, Lopez now has the opportunity to build his own story in Formula One along with US F1 Team. The Bahrain International Circuit on March 14th will be their first step.