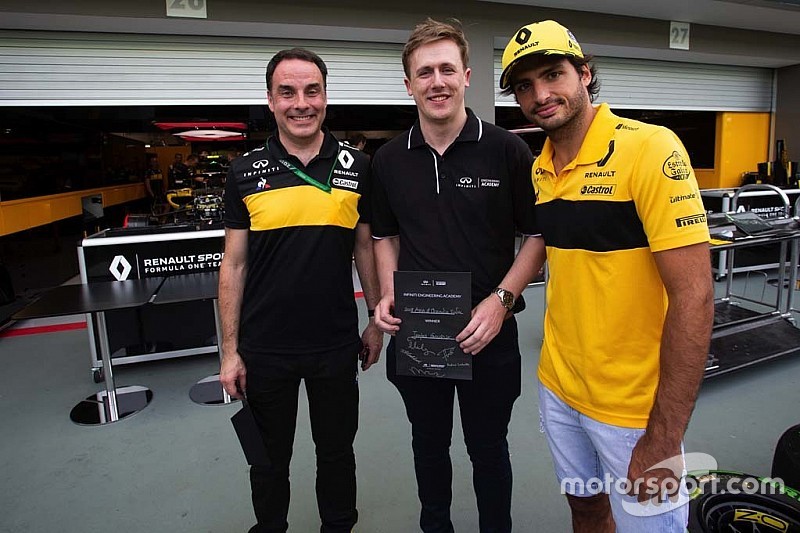 A 25-year-old automotive engineering student has won the opportunity of a lifetime with the Infiniti Engineering Academy to pursue a career in Formula 1.

James Gourlie, a student of RMIT University in Bundoora, Australia, was revealed as the Infiniti Engineering Academy 2018 Asia and Oceania winner by Renault Sport F1 driver Carlos Sainz in the Singapore pitlane ahead of this weekend's grand prix.

His prize is a six-month work placement at Renault F1 in Enstone and a further six months at Infiniti's Technical Centre Europe in Cranfield.

"This is the place to be," said Gourlie. "Formula 1 is the cream of the crop. I tried not to get overwhelmed by everything in the finals, but it's difficult not to."

The annual competition to identify and promote young engineering talent attracted a large and highly competitive entry from across the region this year.

Following an intensive selection process, 10 candidates went through to the finals in Singapore, where a judging panel put them through a full day of practical tests and challenges to whittle the number down to three.

"This really has been the toughest yet," said Ian Goddard, head of technical partnerships at Renault Sport F1 and a member of the judging panel. "All the finalists were highly qualified, very keen, and it was difficult to pick the final three, let alone the winner. You could see them grow throughout the judging process."

The tests included hands-on engineering tasks, such as building a functional dragster model, as well as a rapid cognition test devised by decision science specialists at Harvard University which assessed their teamwork skills and capacity to be decisive under pressure.

Gourlie and the other finalists (pictured above) R Arvind (25) and Timothy Spooner (22) underwent a second day of tests in the paddock at the Marina Bay Circuit, facing both engineering tasks and a grilling from national and international media.

"Being in a Formula 1 garage is a great experience," said Gourlie. "Figuring out what's going on and why is a fundamental skill in engineering.

"What we all want to do is to innovate, to have an idea and see it through to completion and have an impact on car performance - and maybe one day see that innovation trickle down into the engineering space.

"The decision-making test was particularly interesting because you have a combination of data and opinion, and you have to use that to arrive at the most effective decision possible in a short space of time."

Sainz added: "It's really pleasing to see gifted young engineers getting an opportunity to fulfil their potential. You just have to believe, and go for it."

The Infiniti Engineering Academy (IEA) was launched in 2014 and the prize for the seven regional winners (from the US, Canada, Mexico, Europe, Middle East, China and Asia-Oceania) is a six-month placement at both Renault and Infiniti.

If you're a current engineering student and fluent in English then visit http://academy.infiniti.com for more information.