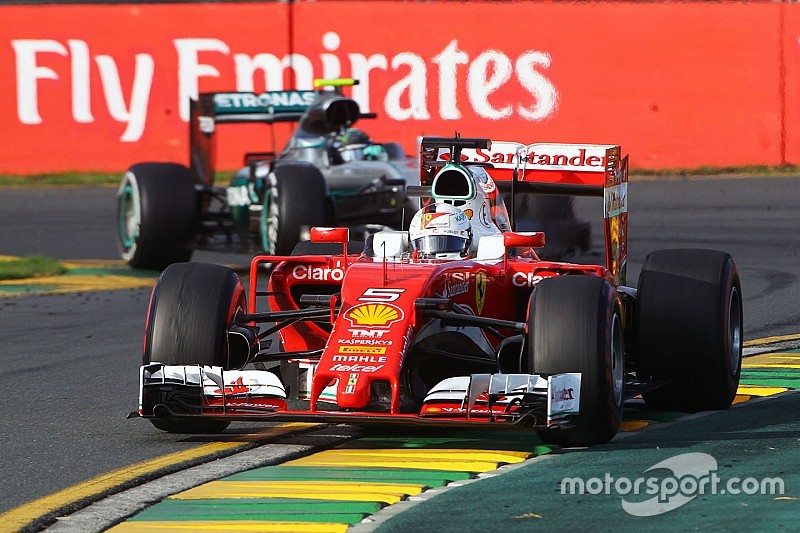 Sebastian makes it to the podium. A technical problem stops Kimi after 21 laps.

Melbourne – Scuderia Ferrari put on a strong showing at the Australian Grand Prix. At the start, Sebastian Vettel and Kimi Raikkonen both got the jump on the two Mercedes ahead of them on the front row of the grid, to lead the race. However, after 18 laps the race was red-flagged because of a huge crash involving Fernando Alonso and Esteban Gutierrez.

The stoppage wiped out the advantage Vettel had built up over Rosberg and upset the race strategy, allowing Nico Rosberg and Lewis Hamilton to move back into the top two places. Raikkonen then had to pit and retire at the end of lap 21 with a technical problem. Vettel began to close steadily on the Mercedes duo so that he ended the race right on the tail of the German cars.

Maurizio Arrivabene: ”Our pace was good in the first part of the Grand Prix, before the race was red-flagged, but we shouldn’t use it as an excuse. This only show that you shouldn’t count your chickens before they’re hatched. Today’s race should serve as a lesson to us to push even harder, with even more humility and dedication, starting already at the next race in Bahrain.”

Sebastian Vettel: “I obviously had a great start, I was very happy to see that I had a better start than the two cars in front of me, reminding me of Hungary last year and it worked out. It was great to see that Kimi made it as well, so we got first and second and from there we dictated the pace. The red flag didn’t help us, but to be fair the most important thing was that Fernando and Esteban were alright. It was the right decision to stop the race.

First time I went through I saw the debris on the track. Naturally the expectations are higher when you had a strong season last year and you wanted to close the gap. Yesterday we were a bit further away and today we were closer. In general it was a great race, I was racing flat out until to the end, I didn’t want to go onto the grass but I did the lawn mower! So I don’t have to do it next week when I go home, but for sure we would have liked more from today.”

Kimi Raikkonen: “Today we had a good first part of the race but at a certain point I lost power and had to retire. I don’t know exactly what happened, I don’t think that the problem was related to the engine because it was still running. It must have been something else. It’s a very unfortunate thing for the whole team. After the winter testing we had a rough idea that we should be pretty ok, Saturday was a funny day, with very odd conditions and circumstances, so we knew that the time difference in qualifying was not real. The car has been handling well, it’s fast and I had a good feeling but obviously we need to finish the race. We still have some work to do.”

McLaren Honda: Race and accident report from the Australian GP

How Stroll came within 11 days of Verstappen's F1 record