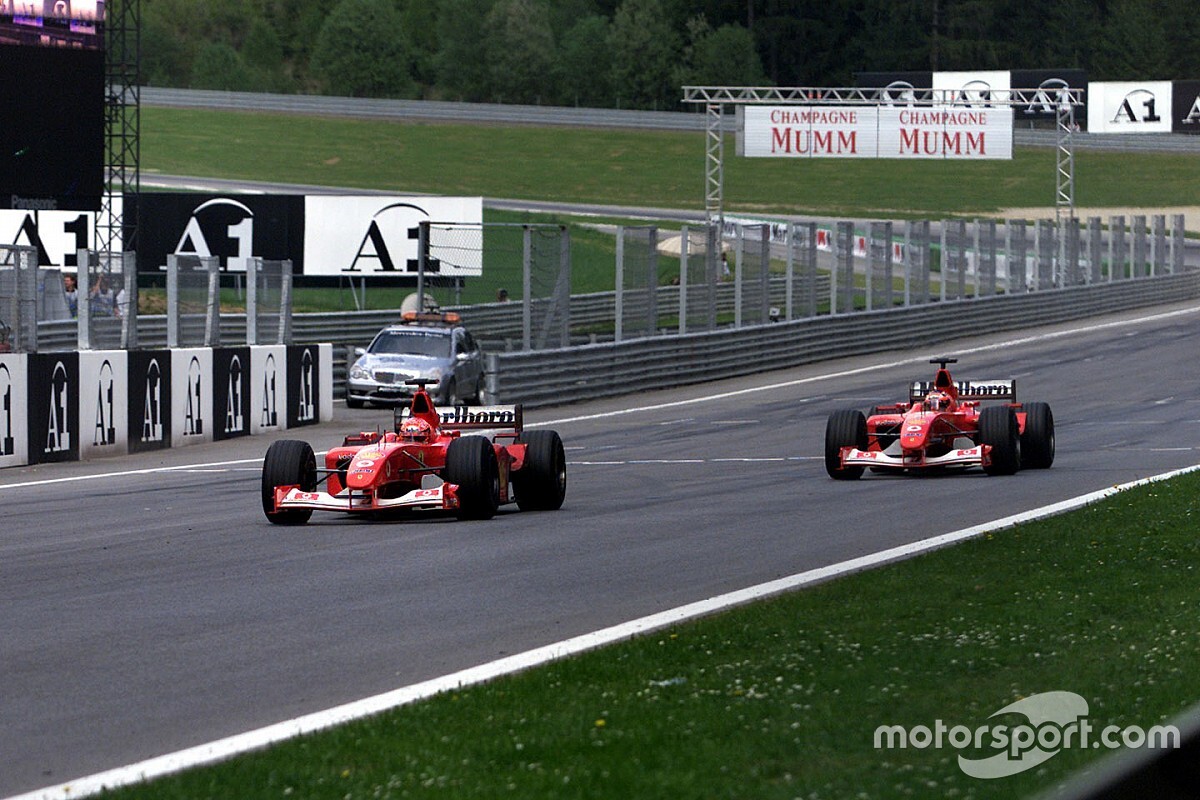 On May 12 2002 Ferrari was the centre of controversy at the Austrian Grand Prix when Rubens Barrichello was asked to hand the win to teammate Michael Schumacher.

Pole sitter Barrichello was comfortably leading the race in the closing stages, until he was asked by Ferrari to move over for team leader Michael Schumacher.

Barrichello initially refused to budge, but ultimately let Schumacher past coming out of the final corner of the final lap. Schumacher just edged ahead and took the win by less that two tenths, which made it one of the closest finishes in F1 history.

The events at the A1 Ring caused quite a stir, with both the press and the fans in uproar. First there was the premature timing of Ferrari’s call. The Austrian Grand Prix took place early on in the 2002 season and Schumacher had already won four out of the first five races of the season when the paddock arrived in Spielberg.

That made Ferrari’s call look rather unnecessary at the time, a point reinforced at the end of the season when Schumacher took the title with twice the amount of points as Barrichello.

It was also the manner in which the swap took place that didn’t sit well with any onlookers. Barrichello could have been subtle, but chose to ostensibly pull over at the last possible moment. That move was entirely understandable from the Brazilian's point of view, but also meant there could be no debate on what had transpired.

Amid booing from the crowd, the podium ceremony was suitably awkward. Schumacher broke protocol by insisting Barrichello take the top step on the podium and then handed him the winner's trophy.

In the aftermath of the Austrian Grand Prix, the FIA handed Schumacher, Barrichello and Ferrari a hefty fine for breaching the podium protocol, but not for the swap. 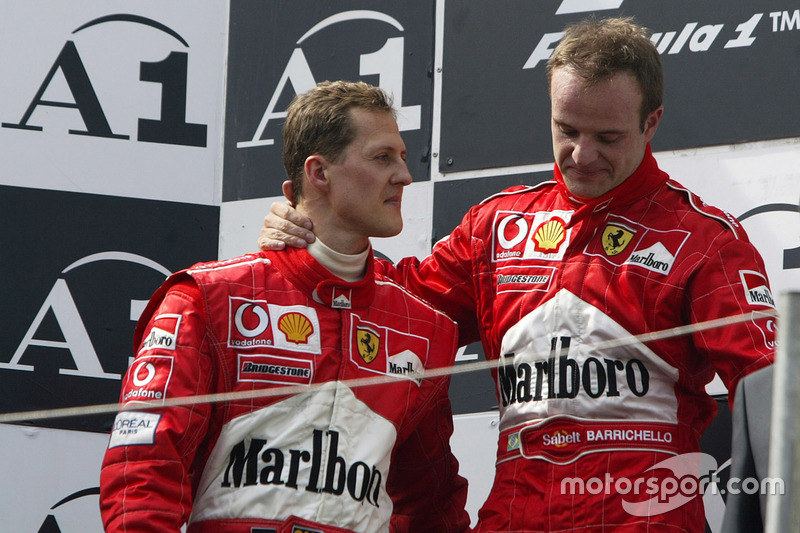 Later that year, the FIA decided to ban team order from the 2003 season onwards, but it was a rule that proved difficult to enforce. Teams would start using coded messages instead, which technically didn’t fell foul of the regulations.

When Felipe Massa was told by Ferrari during the 2010 German Grand Prix that “Fernando is faster than you”, everyone knew what those words really meant, and Massa soon let his teammate past. Again, Ferrari caused uproar and this time it was fined $100,000 by the FIA, although Alonso was allowed to keep his win.

Either way, the post-Hockenheim investigation by the FIA only reaffirmed that the rule was difficult to police and in December it was scrapped altogether. Team orders were allowed once again, and would be used at various times in the following decade.

Sebastian Vettel, still enraged about teammate Mark Webber driving him towards the pit wall at the 2012 title showdown in Brazil, decided to ignore 'multi-21', an instruction to hold station. Vettel passed Webber for the lead and took a much-debated victory.

Fortunately for F1 fans, most team orders since 2013 have been issued in a similar vein: trying to secure a result by not letting squabbling drivers race tooth and nail, rather than actively manipulating a race result. 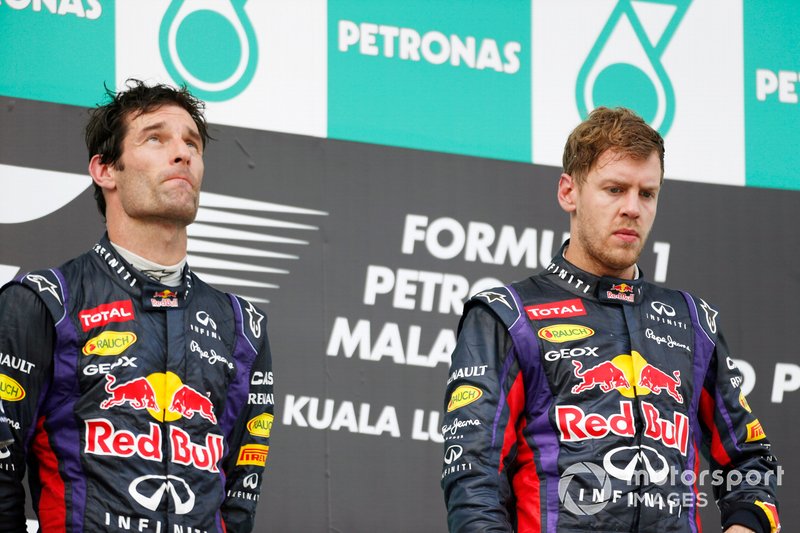 What often gets lost however, is that team orders have been part and parcel of Formula 1 since its inception. In fact, the great Juan Manuel Fangio twice won a race in a teammate’s car. When Fangio’s Alfa Romeo broke down in the 1951 French Grand Prix at Rheims, Luigi Fagioli was asked to pull over and let Fangio finish the race in his car instead.

It was hard to accept for Fagioli, who already had a history of being the number two at Mercedes behind Rudolf Caracciola in the pre-war days of grand prix racing. At least Fangio did go on to win the race and his Italian teammate was credited with his first and only win in Formula 1. At the age of 53, Fagioli would also ended up being the sport’s oldest race winner.

That scenario repeated itself in 1956 when Fangio took over the car of Ferrari teammate Luigi Musso in Argentina. Musso also took his only F1 win while watching someone else drive the car across the finish.

When Fangio’s car broke down again in Monza, Lusso refused to step aside a second time. Peter Collins sacrificed his own world championship chances and handed his car to Fangio, who would seal his fifth world championship with second place.

Team orders would continue to be a regular and legitimate tactic over the next decades. John Surtees beat Graham Hill to the 1964 world title courtesy of Lorenzo Bandini, who moved over for Surtees in the Mexico season finale.

The ‘80s were marked by several displays of disobedience. Carlos Reutemann refused to answer calls from his Williams team to move over for Alan Jones in the 1981 Brazilian Grand Prix, a call which was particularly remarkable because Reutemann was actually ahead in the championship.

Then Renault found itself in a bit of a pickle when Rene Arnoux declined to move over for Alain Prost in the 1982 French Grand Prix.

The most infamous example was Didier Pironi’s decision to pass Ferrari teammate Gilles Villeneuve in the San Marino Grand Prix that year, despite Ferrari issuing its own 'multi-21' command to hold station. The move enraged Villeneuve, who was killed two weeks later while qualifying for the Belgian Grand Prix.

In 1989, Imola was the backdrop for another intra-team row over team orders. McLaren teammates Alain Prost and Ayrton Senna had agreed that whoever led after the first corner would not be challenged. Yet after a restart Senna swept past Prost, won the race and sparked a massive row between the pair, which would only get worse over time.

The controversies above are just a handful of incidents from the F1's 70-year history. While team orders may be hard to accept for fans of the sport, blatant calls like Austria 2002 are fortunately few and far between.