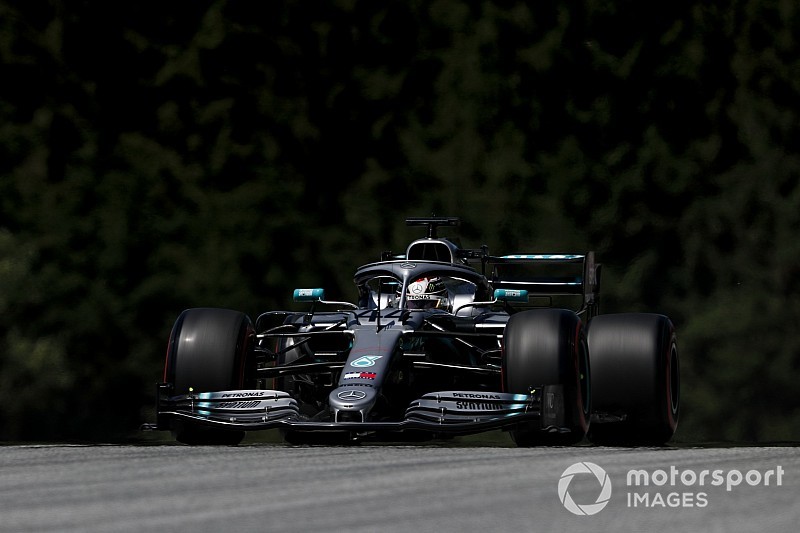 Championship leader Hamilton took control of the session at the end of his running on a second set of soft tyres.

His 1m04.838s eclipsed Vettel's best by 0.144s after the Ferrari lapped out of sync compared to the rest of the frontrunners.

Valtteri Bottas was just 0.017s behind Vettel in the second of the Mercedes, while Charles Leclerc completed the top four as Ferrari ran through development items to establish why some upgrades introduced last weekend did not work as expected.

None of those four drivers made the early running at the Red Bull Ring, as Max Verstappen kicked off his team's home race by setting the pace initially on medium tyres.

He traded times with Hamilton before Leclerc moved to the top of the pile on a fresh set of medium tyres.

Leclerc's 1m05.409s was a tenth quicker than Verstappen managed, before Bottas put Mercedes ahead with a 1m05.299s on softs.

He improved to a 1m04.999s after that but failed to make further progress after a couple of lock-ups and complaints about the braking.

Bottas had a delayed start to the session after Mercedes discovered an oil leak an hour before FP1 began.

That meant he completed opening practice with an old-spec engine.

As he failed to improve, Hamilton nipped ahead after a series of laps that threatened a new fastest time but never quite delivered.

Vettel then joined in on a new set of medium tyres with around 20 minutes to go and leapt to second.

Verstappen slipped to fifth, four tenths off the pace. He looked capable of setting a faster time after posting the best middle sector of anyone, but did not improve his best.

Red Bull teammate Pierre Gasly was just over a tenth slower as he kicked off his weekend in encouraging fashion.

Carlos Sainz won the best-of-the-rest battle with a new upgraded Renault engine in his McLaren.

The Spaniard was only a tenth slower than Gasly and four tenths clear of the works Renault of Daniel Ricciardo.

Kevin Magnussen's Haas and the second McLaren of Lando Norris completed the top 10.

With just over three minutes remaining, the session was red-flagged.

Nico Hulkenberg ran wide exiting the penultimate corner and broke his front wing on the yellow sausage kerbs that line the run-off.

He rejoined via the grass at the final corner and broke more of his car, peppering the circuit with chunks of debris.

Sainz set to start Austrian GP from back of grid