The FIA has confirmed that Lewis Hamilton will start fourth on the grid for the Austrian Grand Prix as a result of his three-place penalty for impeding Kimi Raikkonen in qualifying. 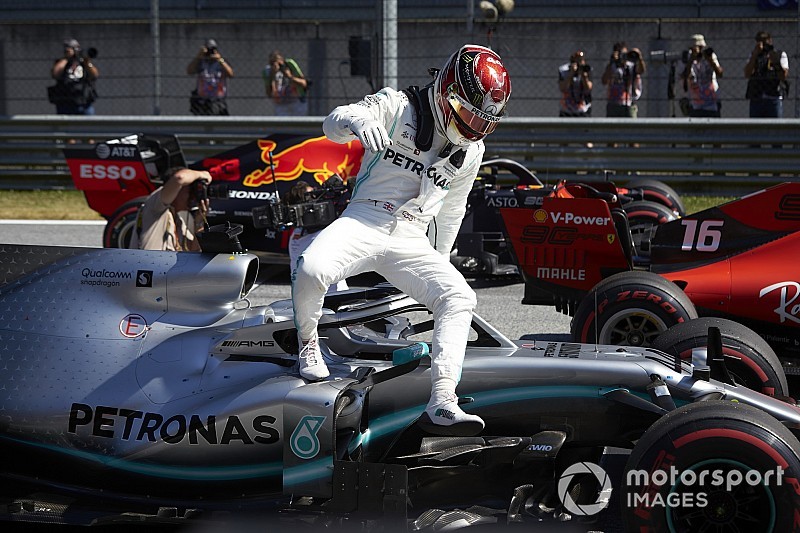 Hamilton had qualified second behind Ferrari’s Charles Leclerc at the Red Bull Ring, but was given a three-place grid drop for the incident with Raikkonen, which happened early in Q1.

It had been suggested that Hamilton would therefore start fifth, but with Haas driver Kevin Magnussen – who qualified P5 in the top-10 shootout – taking a five-place penalty for fitting a replacement gearbox, the Mercedes driver will start fourth due to the way the FIA applies grid penalties. It means that Hamilton will join his team-mate Valtteri Bottas behind front row starters Leclerc and Max Verstappen, with McLaren’s Lando Norris starting fifth.

The FIA system applies penalties in the order they are handed out, but vacant grid slots are only closed up once all the sanctions have been handed out, rather than the order being shuffled up after each driver is moved.

The provisional grid released by the FIA includes Nico Hulkenberg’s penalty for taking a new V6 engine, George Russell’s penalty for impeding Daniil Kvyat and the back of the grid power unit penalties for Alexander Albon and Carlos Sainz.

Hulkenberg will start 15th for Renault, with Williams driver Russell starting 18th. Albon and Sainz will start last in 19th and 20th.

The original provisional grid issued by the FIA earlier listed the two back of the grid starters as Sainz in 19th, and Albon in 20th. But they were subsequently swapped with a new document issued some 40 minutes later.

A new rule introduced for 2019 specifies that in such cases priority goes to the driver who sets the quicker qualifying time, whereas in the past it was the first driver to take to the track and use his new elements. This was done to encourage penalised drivers to run in qualifying, and stop a traffic jam at the end of the pitlane before a session starts.

Sainz did not set a meaningful time in Q2, allowing Albon to start ahead of him.

Why Porsche was F1's missed opportunity