Max Chilton was confirmed for his second season in F1 alongside his 2013 Marussia racer on the F1 Racing Grid.

Led by the announcement Max Chilton will race with the Marussia F1 Team again in 2014, the best of British motorsport was in the spotlight as fans flocked to Birmingham’s NEC for the first public day of Autosport International. 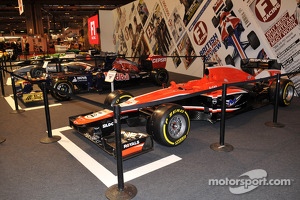 Chilton was confirmed for his second season in F1 alongside his 2013 Marussia racer on the F1 Racing Grid, while at the opposite end of the experience spectrum, 50th anniversary celebrations of Surtees’ 1964 Formula One World Championship with Ferrari started with a display of race cars and bikes from his life in the sport.

McNish took to the stage following the announcement last month that he’s stepping out of the cockpit after a successful 2013 that included a third Le Mans victory and the FIA World Endurance Championship with Kristensen. Their Audi R18 e-tron quattro also features on the main KX Autosport Stage.

“It’s been a very busy Autosport International this year, I think busier than what it has been in the last few years, which shows that British motorsport is thriving,” McNish said.

“I really enjoyed being able to meet with the fans who have provided so much support, and, personally, it was great to present the karting trophies to the next generation of drivers. 2013 was my last season racing at the top level, and it was nice to see the enthusiasm and dedication of the next generation of British stars.”

Along with every current Formula One team on the F1 Racing Grid and the Surtees collection, Autosport International is hosting a dedicated Dunlop British Touring Car Championship feature and a Wales Rally GB display led by Colin McRae and Richard Burns Subarus.

“We’ve got much more to come tomorrow and we’re looking forward to hosting the likes of John Surtees, Martin Brundle, Tom Kristensen and Allan McNish again, along with Adrian Sutil who joins us to round out another fantastic edition of Autosport International.”

Under the same roof, the Performance Car Show in association with Autocar and PistonHeads features the best of the motoring world, with sensational displays of the latest supercars from Ferrari, Aston Martin, Jaguar, Porsche and McLaren accompanied by new model launches from Vauxhall and Abarth.