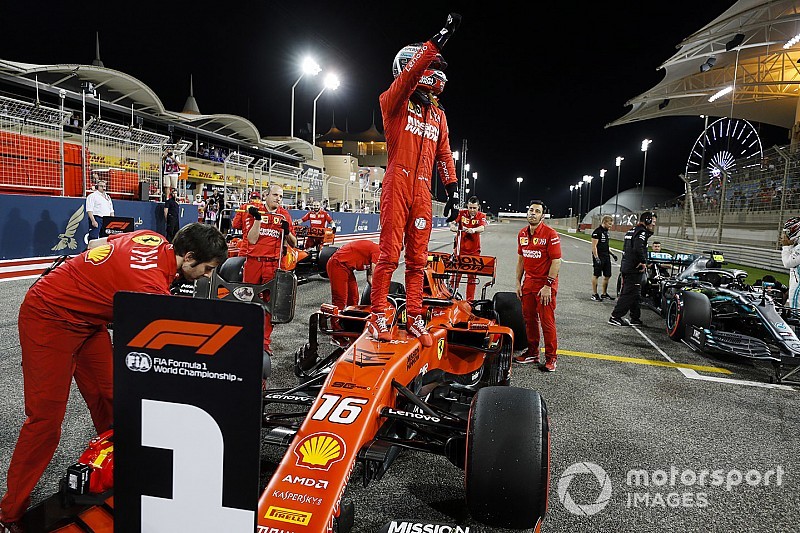 On his first run, Leclerc set a 1m27.958s on soft Pirellis, which gave him the advantage over Mercedes driver Lewis Hamilton given Ferrari teammate Sebastian Vettel did not attempt an initial run.

Leclerc then went out and improved to a 1m27.866s on his second attempt, which was three tenths faster than Vettel managed on his sole run.

Red Bull driver Max Verstappen was best of the rest, but he faced a tough challenge from Haas driver Kevin Magnussen – who ended up just 0.005s behind.

Carlos Sainz capped a strong qualifying session for McLaren with seventh fastest, supported by teammate Lando Norris, who was also in Q3 and ended up 10th.

Romain Grosjean, in the second Haas, and Alfa Romeo driver Kimi Raikkonen ended up between them in eighth and ninth place respectively. Grosjean was given a three-place grid penalty, however, for impeding Norris in Q1, and will start 11th.

All drivers in the top 10 set their fastest lap in Q2 on soft rubber, meaning they will start the race on those tyres.

Daniel Ricciardo was 11th fastest for Renault, but will start 10th, after lapping just 0.017s slower than Raikkonen in Q2.

He did not improve on his second run, meaning he was not able to improve on the 11th place he claimed at the first attempt.

Toro Rosso driver Alex Albon was 12th fastest, just 0.042s away from a place in Q1 despite only having one set of fresh softs for Q2, beating Red Bull driver Pierre Gasly.

Gasly failed to improve on his time from the first run, complaining over the radio that "I can't put the throttle down, I don't know why – it snaps everywhere".

Sergio Perez only had one run on fresh softs in Q2, which was good enough for 14th ahead of Daniil Kvyat, who was unable to improve on his second run.

Alfa Romeo driver Antonio Giovinazzi was the fastest of those eliminated in Q1 in 16th place after lapping just 0.067s slower than Raikkonen.

The Italian briefly lifted himself out of the drop zone with his pace on his second set of softs, only to be shuffled back down during a quickfire flurry of late improvements – subsequently complaining that the front tyres were too cold.

Renault driver Nico Hulkenberg was the big casualty in Q1 after only improving by just over two tenths on his second run, which put him just ahead of the second Racing Point of Lance Stroll.

George Russell prevailed in the battle of the Williams drivers in 19th place, just four hundredths of a second faster than teammate Robert Kubica after complaining over the radio that the "tyres were well out of the window".