The 2009 Formula 1 season will long be remembered as the year that Brawn GP emerged from the ashes of the Honda team and went on to win the world championship.

But, the bottom nearly fell out of its challenge as soon as the season started, with a row erupting over a contentious design feature of its car: the infamous double diffuser.

We take a look back at why the concept that some teams got a head start on wasn't banned immediately, and how everyone reacted that season.

The wide sweeping rule changes introduced for 2009, with the intent of improving the ability of drivers to follow one another and thus improve overtaking, had sought to reduce the overall downforce that was achievable.

F1's designers were clearly in search of ways of reversing this and three teams, who don't at first seem remotely connected, universally struck upon the idea of adding a secondary tier to their diffuser.

It's an idea that was reportedly dreamt up by Super Aguri designers working on plans for the then 2008 rule change.

The team's demise would see its personnel go off in different directions, although most would find their way to Honda, who'd been bankrolling the exercise to a large extent anyway. Some landed with the other Japanese team on the grid – Toyota, or the Toyota-powered team Williams.

The double deck diffuser that could be seen on the BGP001, the Toyota TF109 and Williams FW31 was immediately put under scrutiny by the rest of the grid, who'd clearly missed an opportunity to expand the volume of their diffuser and sought to remove any advantage the three teams had gained. 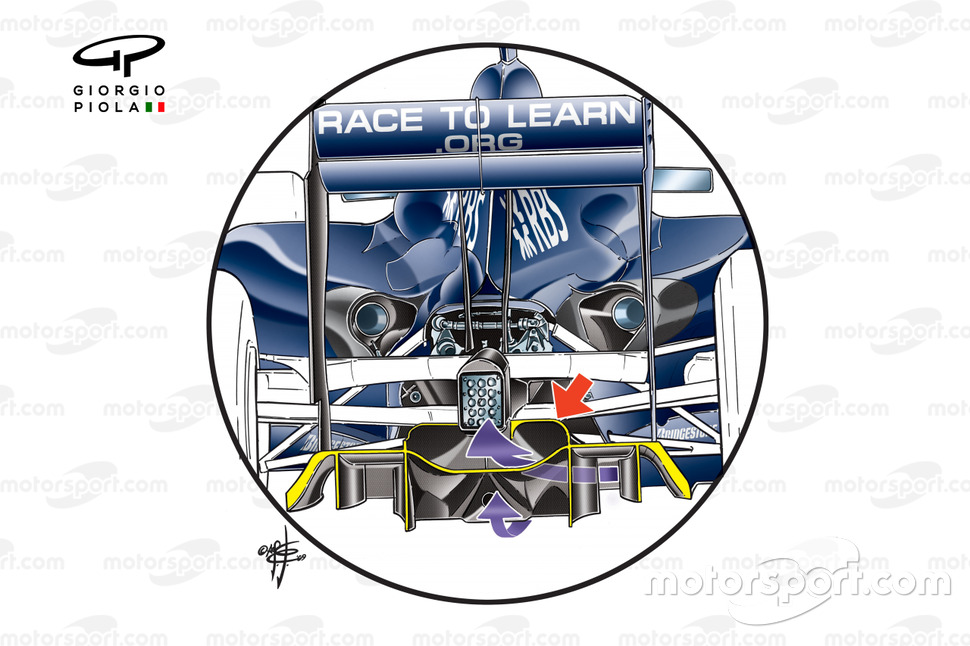 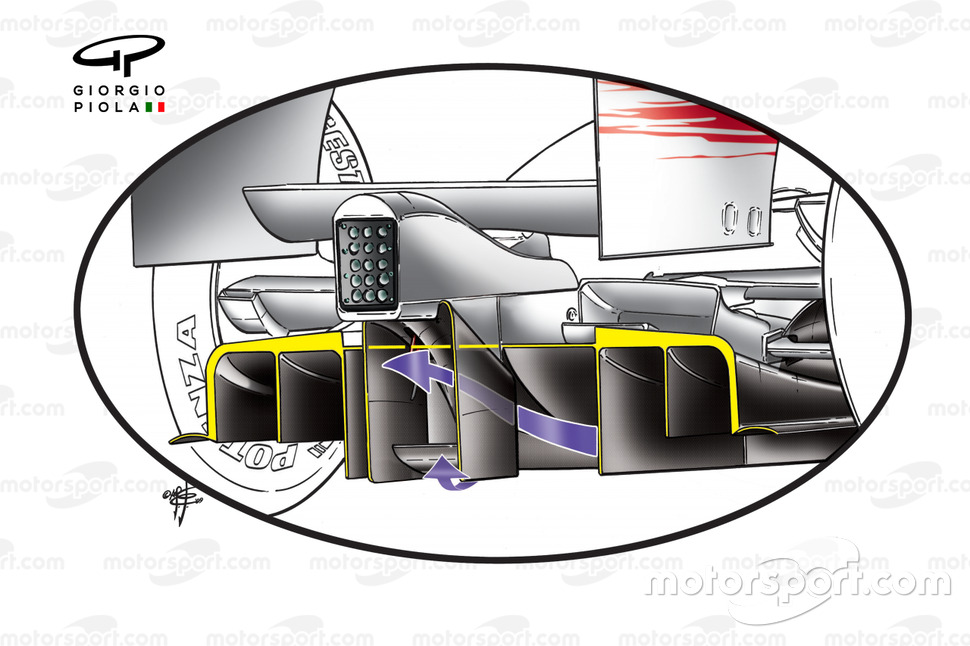 The rules introduced for 2009 had set about limiting the dimensions of the diffuser to 1000mm wide, 175mm tall and 350mm long.

The use of the double diffuser arrangement hinged on the wording on article 3.12.7 of F1's Technical Regulations.

The fact that this only required for the designers to be compliant in one dimension opened up the possibility for channels to be created, which allowed airflow to move into the upper deck of the diffuser. 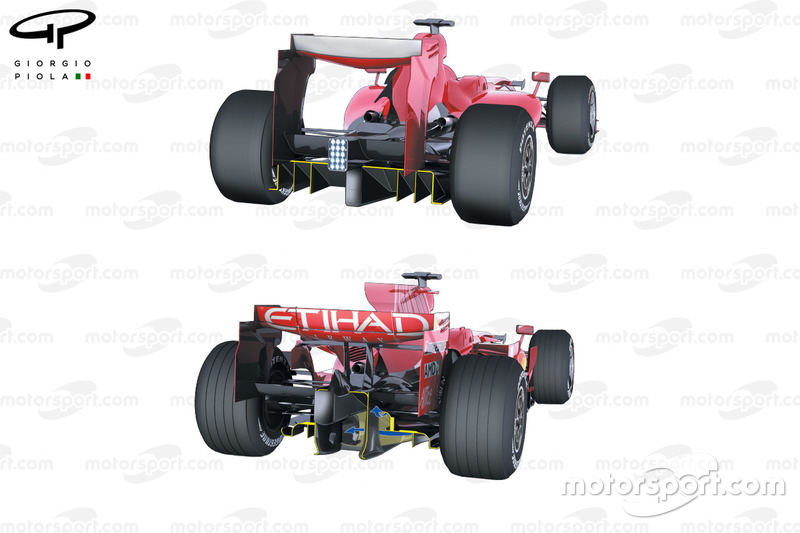 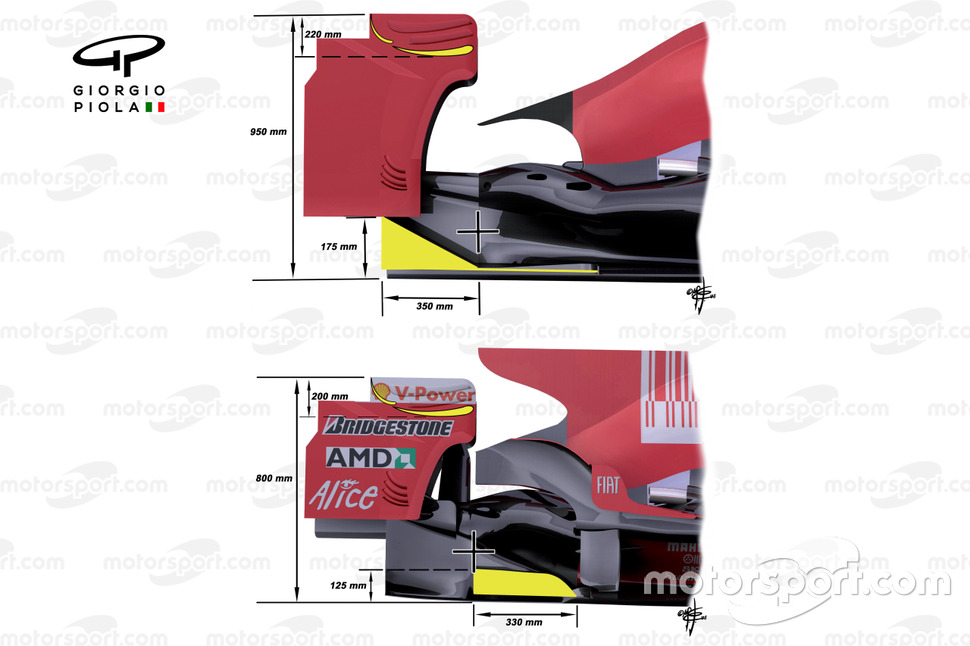 This was an ingenious workaround that exposed the way in which the regulations had been written.

The design did not go down well with the other teams which, having missed the trick, knew it would be an issue to get a double diffuser incorporated on to their cars in the short term.

As such, they opted to protest the design at the Australian GP and lobby the FIA not only to ban the design going forward but also reverse the result of the Melbourne race. 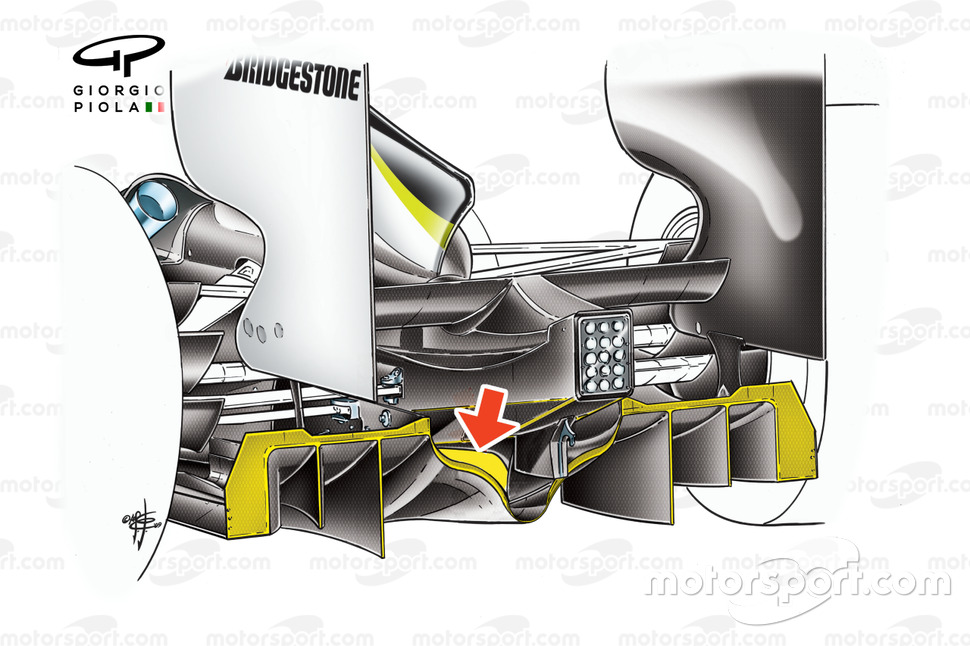 Playing their hand in this way is just one way of winning though, as whilst in the public spotlight they appear to be doing the gentlemanly thing of having a borderline solution banned, they're also hiding a trump card up their sleeve: working on their own solution in case their political manoeuvres backfire.

In this case, the politics failed them, as they were unable to lobby for the double diffuser's removal. So now they'd have to fast track designs from the drawing board and get them on the car as quickly as possible.

The scale of this endeavour should not be underestimated, given how having more downforce on the rear-end would have to be matched at the front for aero balance purposes.

The benefits of the diffuser could not be ignored though, given how much downforce could be gained, and so everyone set about introducing their own version.

Red Bull had the biggest challenge, as it had reintroduced pull rod suspension at the rear of the car. This was a decision that has had an effect on the design of F1 cars ever since, with everyone seeing the packaging and aerodynamic advantages on offer.

It would, however, make life difficult for Adrian Newey and his team, as the pull rod joined the gearbox and crash structure assembly right on the diffuser kick line. This made it extremely difficult to get the best from a double diffuser.

Nothing is insurmountable though and Red Bull, knowing it needed this solution, set about making the necessary changes, irrespective of the upheaval it would have. 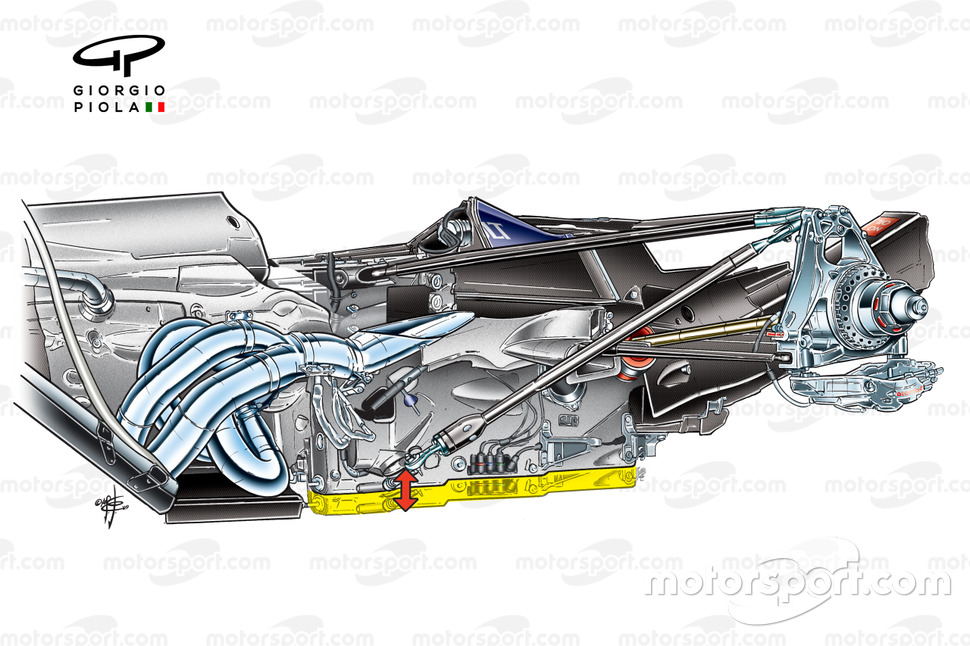 1/5
With the pull rod mounted in such a way, the team set about raising its gearbox in order to clear space for the double diffuser. 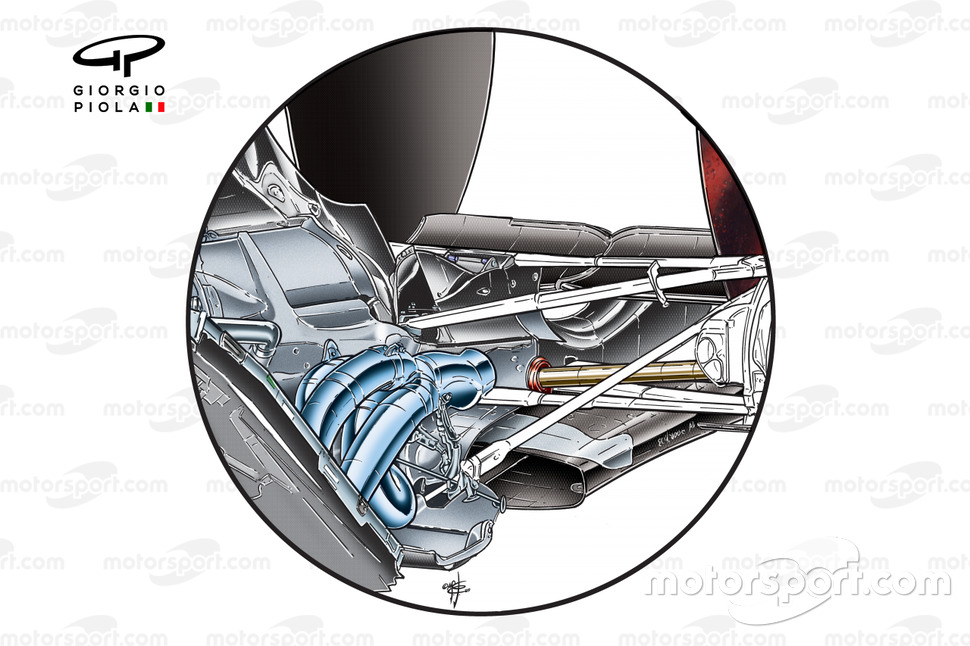 2/5
The channel for its double diffuser can be seen here nestled away under the gearbox. 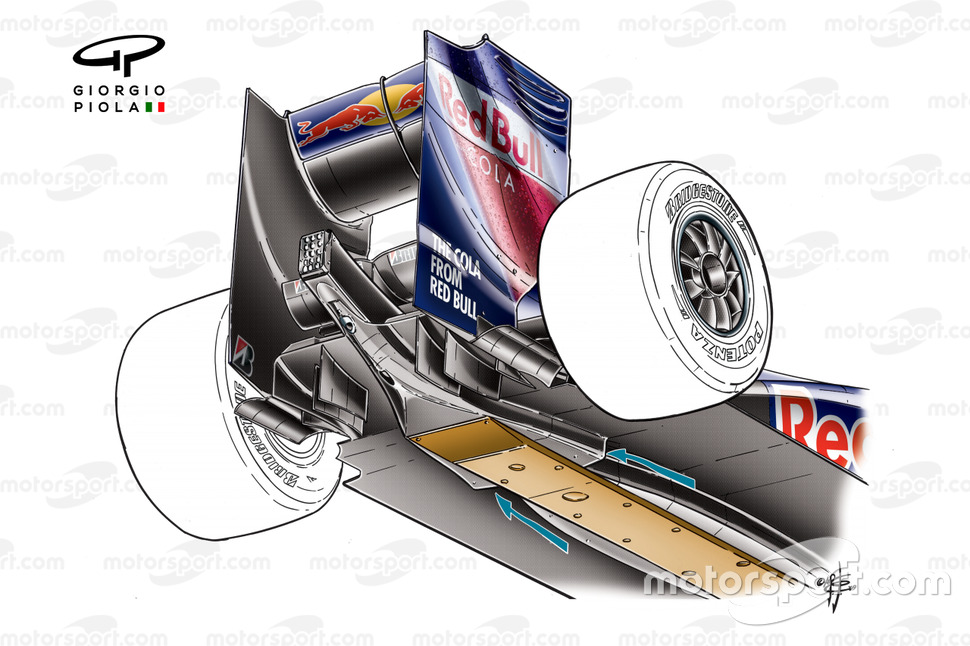 3/5
In order to maximize the amount of flow into the upper deck of its double diffuser, Red Bull created a large throat either side of the lower floor section that carries the plank. This then tapered into a keel shape underbody, which merged with the crash structure to keep flow at maximum through the normal diffuser. 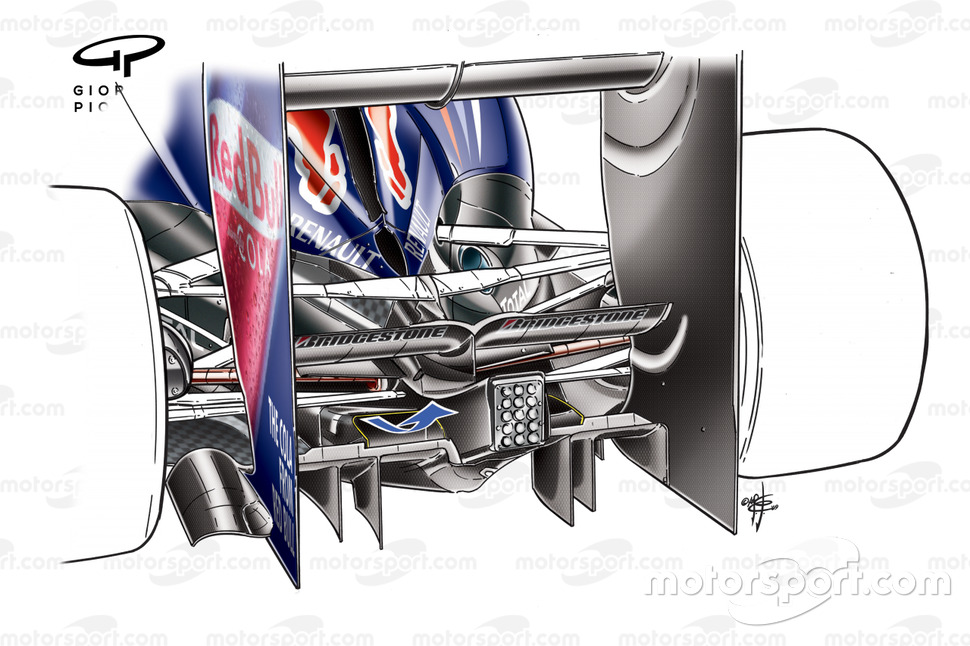 4/5
These developments were introduced in Monaco but continued to be paired with the long endplate design championed by Newey and his team since the start of the season. 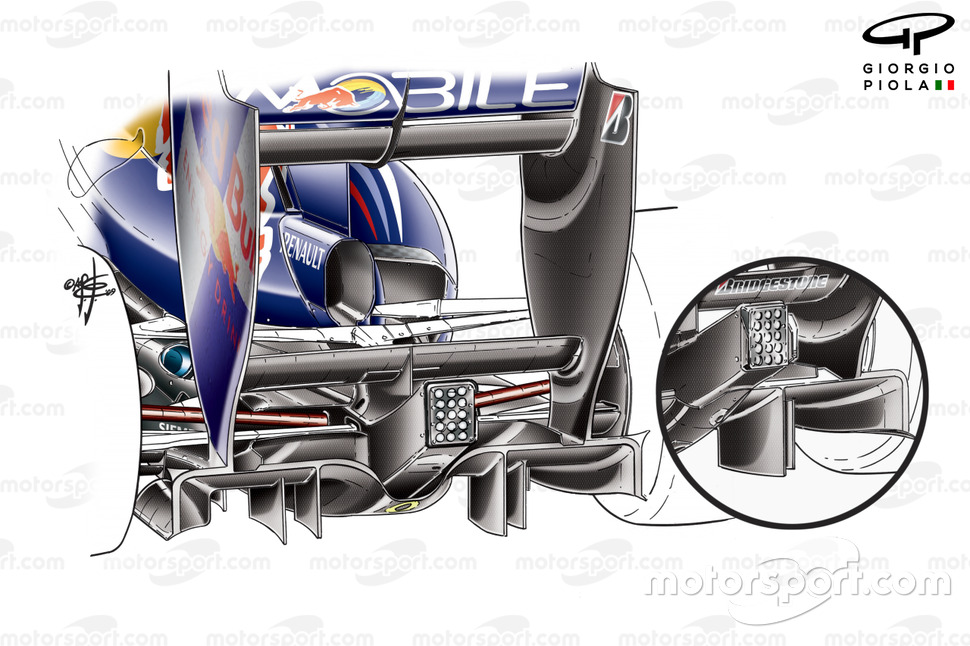 5/5
The team would continue to bring developments for its diffuser design in the coming races and finally relented and moved toward a full-width design.

A challenge for everyone….

Red Bull might have had the biggest challenges to overcome to install a double diffuser but that's not to say the others had it easy either. 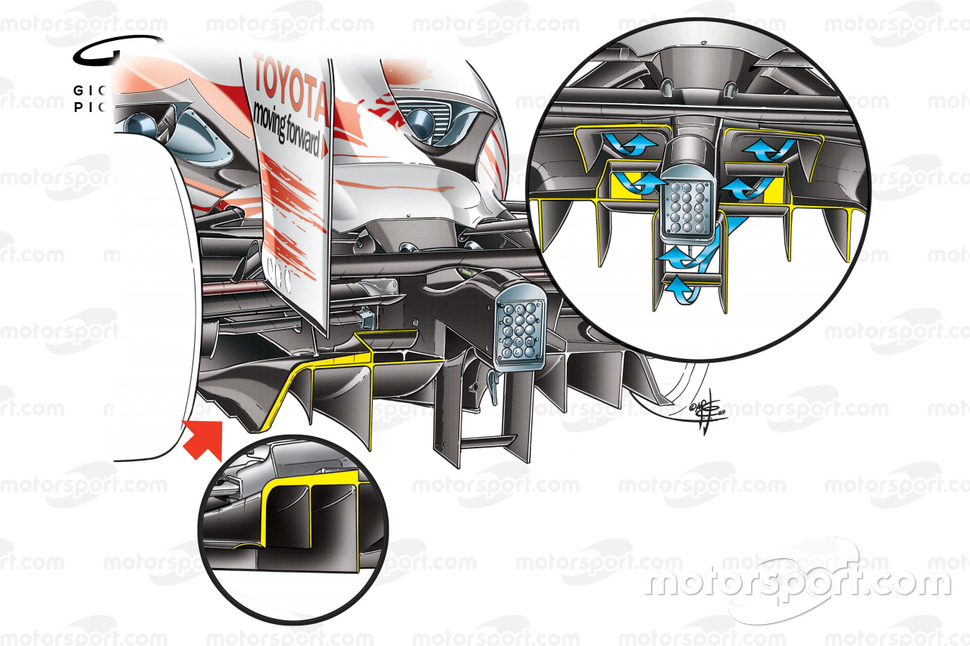 1/9
Toyota started the season with a double diffuser but, by the second round in Malaysia, the team had an even more advanced triple layer variant. 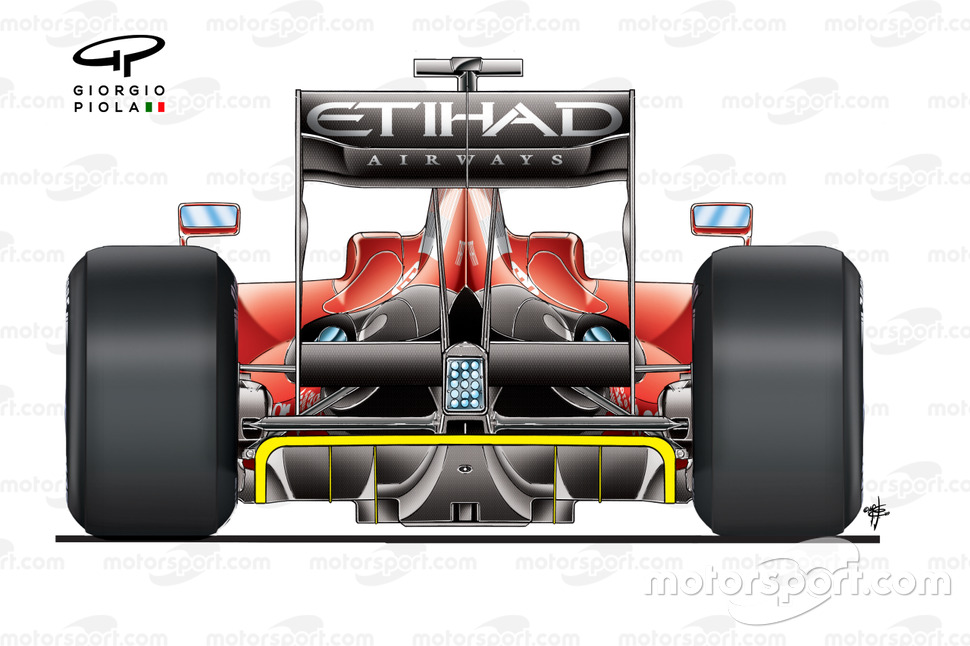 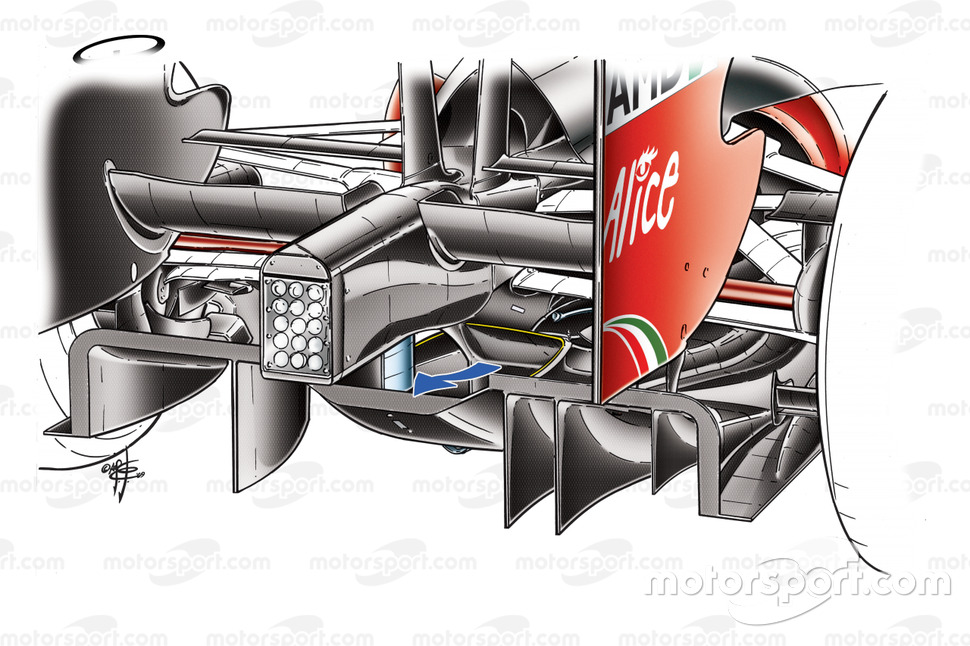 3/9
Ferrari's double diffuser arrived a few races after the FIA had agreed they'd be allowed throughout 2009. 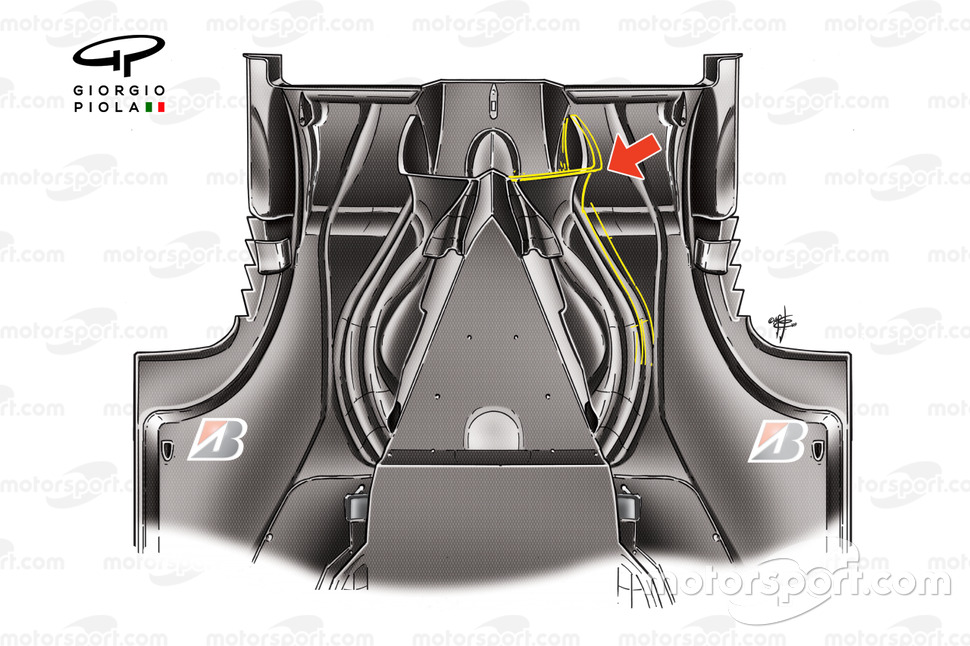 4/9
This view from the underside shows the effort made by Ferrari to use multiple entrance points, given it couldn't do so on the kickline due to packaging restrictions with its gearbox, suspension and crash structure. 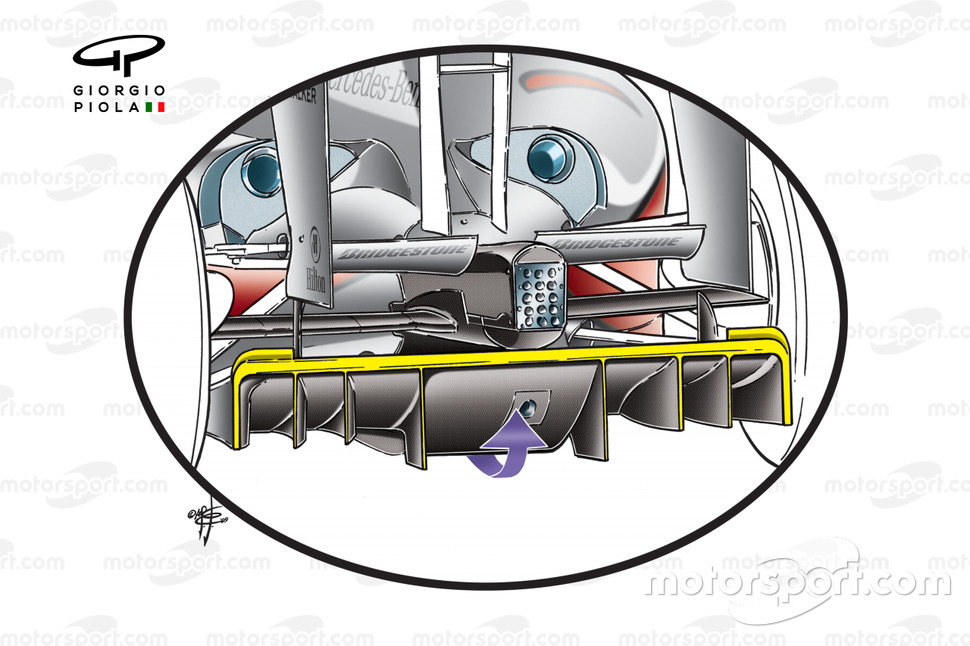 5/9
The original McLaren diffuser for 2009 was more respectful of the original intent of the regulations. However, with the changes needed to accommodate a double diffuser not as dramatic for McLaren as others, it had a solution on the car just a week after the FIA threw out the team's appeal. The team had clearly been working on a solution in tandem with its protest, introducing the solution at the Chinese GP. 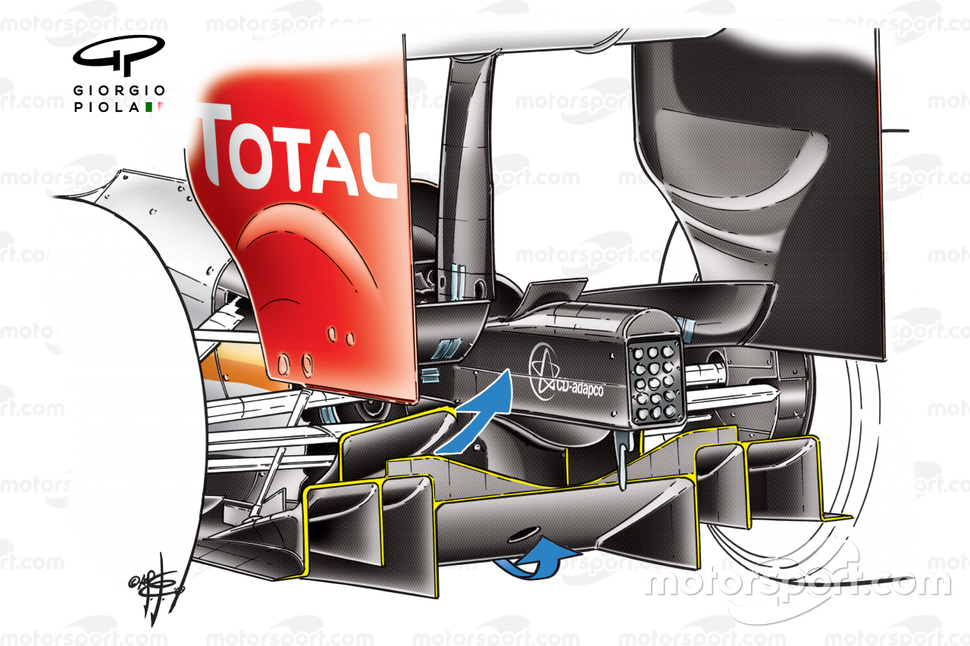 6/9
Renault was another team playing devil's advocate and arrived in China with a new arrangement that was given to Fernando Alonso. Nelson Piquet received the upgrade just a race later in Bahrain. 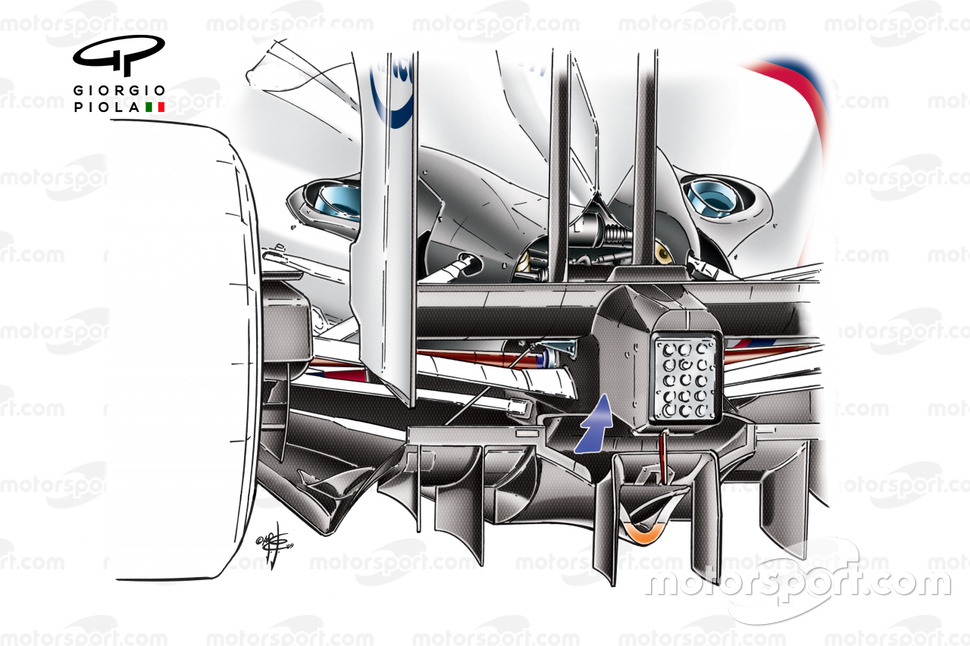 7/9
BMW Sauber was one of the last teams to introduce their double diffuser, with a new solution arriving for the Turkish GP. 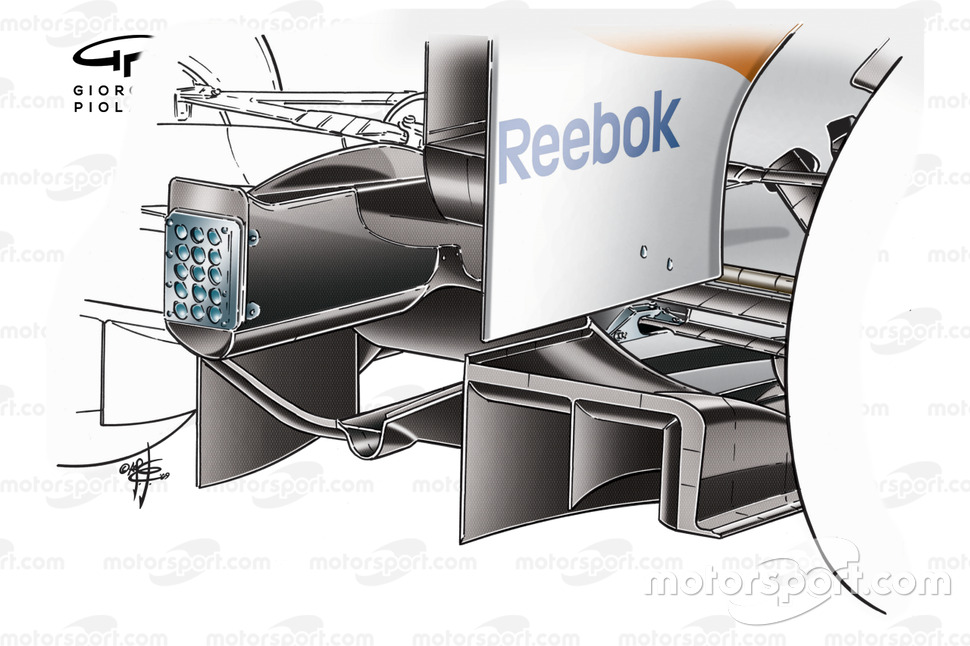 8/9
Purchasing its gearbox from McLaren might have helped with the ease of packaging for Force India, which arrived with its own solution in Bahrain. 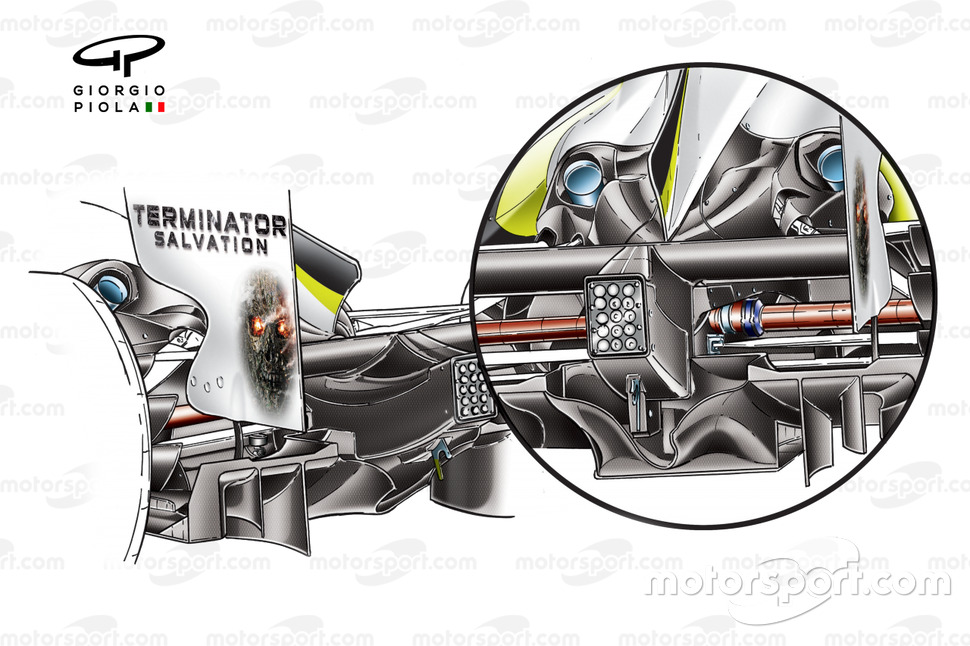 9/9
The BGP001 might have been considered to have the most refined double diffuser on the grid but that didn't stop the team from making further improvements. In Spain it altered the shape of the central section. The FIA continued to allow double diffusers to be used throughout the course of 2009 and 2010, given the resources expended by everyone to include them in their designs. But, from the start of 2011, the loophole that had allowed them to be installed in the first place was closed off in the regulations for good.

Andretti wants to give American drivers "legitimate shot" in F1