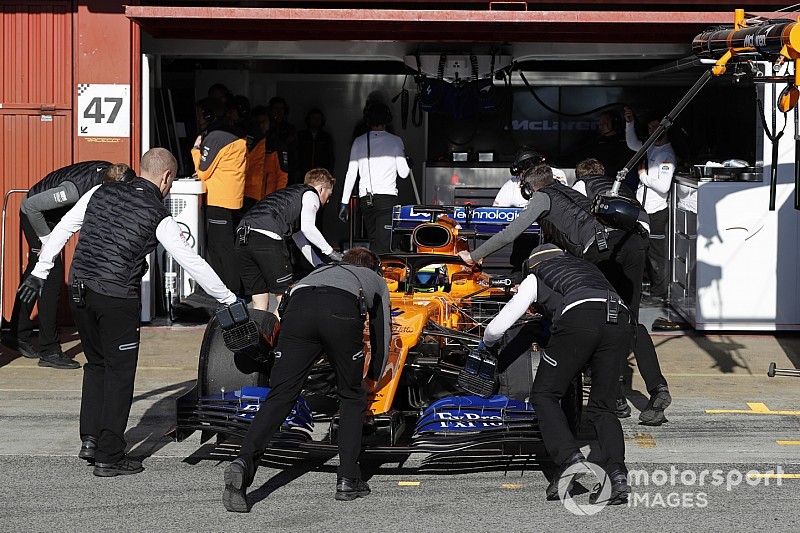 McLaren topped the opening day of the second test, but they - and Mercedes - will have concerns about the technical issues that befell them.

After their mostly-reliable start to pre-season testing last week, McLaren have finally encountered some headaches after a day of highs and lows for the team.

Lando Norris had the unwelcome honour of causing two red flags. In the morning, he was forced to park his McLaren MCL34 up in the opening sector of the lap as his car was struck by hydraulic pressure problems.

The team spent the majority of the morning fixing the gremlins. The Briton returned to the action for the afternoon session, managing to make up the lost ground and register 80 laps.

He looked set for a complete reversal in fortunes when he went fastest in the final hour of the day, bolting on a set of C4 tyres and clocking a 1:17.709 - a time set after more than one flying lap - to go just six thousandths of a second faster than Gasly's effort, set on C3 tyres earlier in the afternoon.

However, moments after Norris left the pits for another stint, his car broke down again on the entry to turn three. McLaren are still investigating the issue, which might suggest a new problem with the car.

“Unfortunately, we didn’t complete as many miles as we had on the programme today, due to some small issues. Nevertheless, on balance, it was a positive day," said Sporting Director Gil de Ferran.

“We were again able to complete some important work in preparation for Australia, with regards to the development and our understanding of the car, as well as getting Lando ready for his debut grand prix."

There were major problems for Mercedes, too. Valtteri Bottas was only on his first lap out of the pits when his car developed an oil pressure problem and came to a stop. The issue was determined to require a precautionary change of power unit, which resulted in the Finn only having the final few minutes of the session to register seven laps.

With Mercedes reverting back to their early testing form and resisting the temptation to throw on the faster tyres, Bottas and Lewis Hamilton finished in eleventh and twelfth respectively.

After spending the majority of test one under the radar, Racing Point finally started to threaten the headline times when they deployed Lance Stroll with a set of the C5 tyres and came agonisingly close to topping the timing charts in the final couple of hours of the day. At the time, they were one tenth of a second off Red Bull's time, not long before Norris' late lap demoted them to third.

Ferrari managed six laps in the early stages of the morning session, but they postponed running in order to check over the cooling system.

A couple of hours were lost, but Leclerc was running again by the late morning, bringing his total up to 29 laps before handing over to team-mate Sebastian Vettel for the afternoon session, who duly returned Ferrari to a position slightly more reflective of their pace. He was the final driver in the 1m17s after a C3-tyre run.

Alfa Romeo's Antonio Giovinazzi completed another solid day with fifth place and 90 laps, ahead of Alexander Albon - who had a few "niggling issues" in the morning session - and Leclerc.

Kevin Magnussen was the busiest individual driver of the day, completing 131 laps and setting a 1m18.769 on the C4 tyre to go eighth overall.

In the hands of George Russell, the FW42 completed 119 laps of the Circuit de Barcelona-Catalunya - a "relief" to the Briton - but emphasized how far the team were behind their opponents.

"It certainly hasn't made up for last week because everyone else at this stage is fine-tuning the balance, whereas we're needing to understand the car," said Russell.

"But I feel we're in a good spot. The car isn't in a perfect window right now but I feel like it's definitely got the potential."

Renault, who had still have the honour of having set the fastest time overall from testing - back on test day four - had a much quieter day.

Their C3-equipped best laps were in the 1m20s, but the team came close to passing 160 laps today, with Daniel Ricciardo in tenth and Nico Hulkenberg in thirteenth, either side of the Mercedes duo.