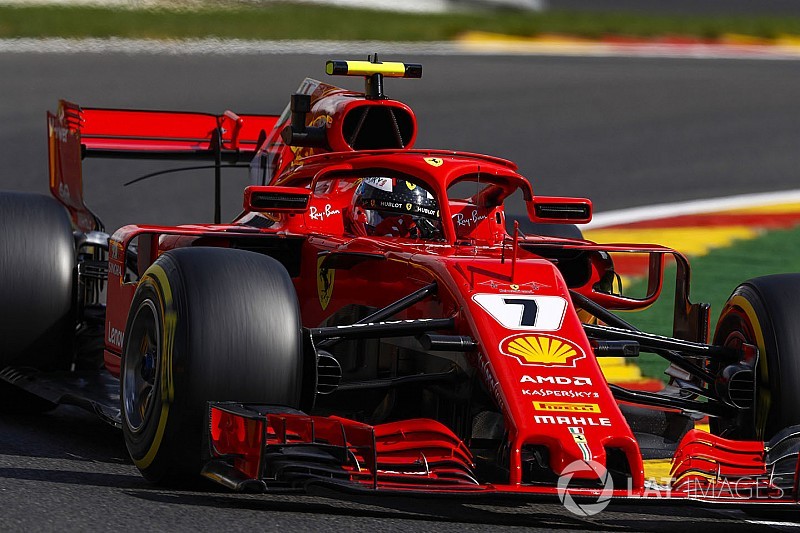 Hamilton initially had the advantage for Mercedes on the first runs, setting a best time of 1m44.369s on medium-compound Pirellis to go fastest.

But he was only 0.031s faster than Raikkonen, who used soft tyres, and things reversed when drivers moved on to their qualifying simulation runs.

Raikkonen was the first of the frontrunners to head out on the supersoft Pirellis, banging in a lap of 1m43.555s with just under 58 minutes of the session remaining.

Two minutes later, Mercedes driver Valtteri Bottas slotted into second, but Hamilton was already on his quick lap and reclaimed second place moments later with a time of 1m43.523s

Ferrari's Sebastian Vettel was forced to abort his first push lap thanks to a moment at the Turn 14 right hander, which eliminated any chance he had of challenging for top spot.

Although Vettel improved on his second and third quick laps to work down to a 1m44.046s, he ended up fifth behind the fourth-placed Red Bull of Max Verstappen, who lapped 0.691s off the pace.

Daniel Ricciardo was sixth fastest, just over two tenths behind Verstappen, after sitting out FP1 with an injector problem.

Racing Point Force India driver Sergio Perez was best of the rest in seventh place, and was one of the later drivers to head out on supersofts after a 21-minute stay in the pits – with only the McLaren drivers bolting on the fastest tyre compound after him.

Perez's lap of 1m44.662s was 1.308s off the best time but gave him a massive advantage of eight tenths of a second ahead of the rest of the midfield, headed by Renault's Carlos Sainz.

Sauber duo Marcus Ericsson and Charles Leclerc set their best times moments apart to secure ninth and 10th, with less than a tenth of a second separating the pair.

Nico Hulkenberg was 11th fastest, but did not use the new-specification floor he ran in FP1 – as the part was given to Sainz for this session.

Haas pairing Romain Grosjean and Kevin Magnussen were 12th and 14th fastest, sandwiching the second Force India of Esteban Ocon – who only completed one lap on his first set of tyres thanks to a left-rear puncture.

Pierre Gasly rounded out the top 15 for Toro Rosso just ahead of the McLaren of Fernando Alonso, who posted his best lap with 35 minutes remaining.

Brendon Hartley, in the second Toro Rosso, was 17th ahead of Williams pairing Sergey Sirotkin and Lance Stroll.

Stoffel Vandoorne was slowest for McLaren, with a lengthy stay in the pits following an initial run during which he described the car as "undriveable" ahead of a promised floor change.

He was the last driver to set his best time, but it was 0.026s slower than Stroll and moved him no further up the timesheets than his earlier pace on medium-compound Pirellis.