It’s true that all wins come with the same number of points, from 8 in the Fifties to 25 today, but they don’t all produce the same level of satisfaction.

It depends when the win came, but also where and there can be no denying that to be first past the flag on the greatest circuit in the world - which is what the vast majority of drivers reckon and they should know better than anyone – is something special, while doing so in a Ferrari is the icing on the cake.

There have been seven drivers who have won at Spa in red, racking up a total of 12 victories. In chronological order they are, Alberto Ascari (twice,) Peter Collins, Phil Hill, John Surtees, Michael Schumacher (four times,) Kimi Raikkonen (twice) and Felipe Massa.

To these names, one can add those of Niki Lauda, Jody Scheckter and Michele Alboreto, who together won four times – two for the Austrian – at the Zolder circuit, bringing the Scuderia’s total of Belgian Grand Prix wins to sixteen.

The quartet of Schumacher Prancing Horse wins in 1996, 1997, 2001 and 2002 are very dear to Ferrari fans, but there are possibly two other performances from the German in this race that put a smile on the faces of those who love the Reds. In 1995, Michael won having started from sixteenth on the grid, showing off all his talents, especially in the wet, as well as demonstrating his aggressive nature on track: it was the first race following the news that the German would be joining the Scuderia and, if any Ferraristi had any doubts about him, that victory wiped them away. 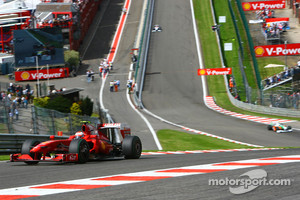 In 2004, Michael didn’t win, but even coming second had a good feeling to it for a man who never grew tired of winning: the eight points he picked up on that 29th August assured him of his seventh world title, his fifth in a row for Ferrari. That day, it was Kimi Raikkonen in the McLaren who was first past the chequered flag in a symbolic passing of the baton between two of the three gods of Spa, the third being without a doubt Ayrton Senna, who was triumphant five times on the hills of the Ardennes.

The Finn has won the Belgian Grand Prix four times (2004 2005, 2007and 2009) while a fifth victory, in 2008, slipped from his grasp in the closing stages when he was caught out by a torrent of water which saw him end up in the barriers with two laps to go.

Particularly significant was the 2009 win, at the wheel of the F60, which was not the most successful car to come out of Maranello, to be polite about it: Kimi was majestic in the use of KERS, first on the offensive in the opening laps and then, once in the lead, on the defensive, managing to make the best of it to fend off a hard charging Fisichella, who from the next race on would become his last team-mate at Ferrari.

In 2008 the win was decided in the Stewards room in favour of his team-mate Felipe Massa, after Hamilton was given a 25 second penalty for cutting the final chicane as he was trying to pass the aforementioned Raikkonen. At Spa, the Brazilian has finished seven times in the top ten from eight starts, only failing to see the chequered flag on his debut year with Sauber in 2002.

Fernando Alonso has just four points finishes, two of them on the podium, from nine Belgian Grand Prix starts, a race that seems to be cursed for the champion from Oviedo, at least in Formula 1.

However, Fernando has experienced the taste of victory at Spa-Francorchamps back in 2000, when he was racing in Formula 3000 and he did it in style, taking pole, the win and the fastest race lap. Since he has raced in red, luck has certainly not come the Spaniard’s way on the rollercoaster ride that is Spa: in 2010 he was caught out by the rain and last year he didn’t even get as far as the first corner, given that Grosjean’s Lotus flew over him just seconds after the lights went out.

A fourth place in 2011 is not enough to please Fernando and therefore, on behalf of all Ferrari fans, he has our best wishes in the hope of banishing the photo that is set in time from that Formula 3000 weekend thirteen years ago.