Toto Wolff has described the Singapore Grand Prix as one of his Mercedes Formula 1 team's “greatest victories,” at a venue where it has sometimes struggled in recent years.

The Marina Bay street circuit was expected to favour rivals Ferrari and Red Bull more than Mercedes, but this didn't stop Lewis Hamilton from taking pole and converting it into a convincing win.

Mercedes boss Wolff stressed that a bad weekend in Spa had motivated the team to pull out all the stops as it sought to get back to winning form.

“It feels like one of the greatest victories, because it was really our bogey circuit in the past,” said Wolff. “And we were so motivated to do well here.

"And we showed that we can also perform in Singapore, and coming here and finishing by winning the race, and with a very solid team result, is really a great achievement for everybody in the team.

“I think you need to make your own destiny a little bit. And we’ve worked so hard after Spa, to understand the car, and we knew against many voices that we could perform well in Singapore.

"And we came here, and qualifying was amazing, the lap was really stardust, and then he [Hamilton] controlled it throughout the whole race.”

Wolff said there was no specific effort focussed on improving Mercedes' performance at the Singapore circuit.

“It was just part of the ongoing development, to really try to understand the tyres and the car better, and make it more compact with it all together.

"There’s never one silver bullet, it’s tiny little steps that are important to make the car perform like it did.

“There’s marginal gains that will determine the outcome of this championship, because on performance levels we are very close to each other.

"So we have to keep the foot on the throttle and try to avoid mistakes and continue to develop the car.”

Wolff insisted Hamilton's current 40-point advantage over Vettel meant little, as there remains "absolutely" enough time in the season still for the Ferrari man to turn it around.

“Forty points advantage or zero, makes no difference for us. You can see, like in Austria, we had a double DNF, how quickly it goes, and you lose 25 points.

"And we just have to look weekend by weekend and try to perform at our best level, and it’s only won when it’s won.” 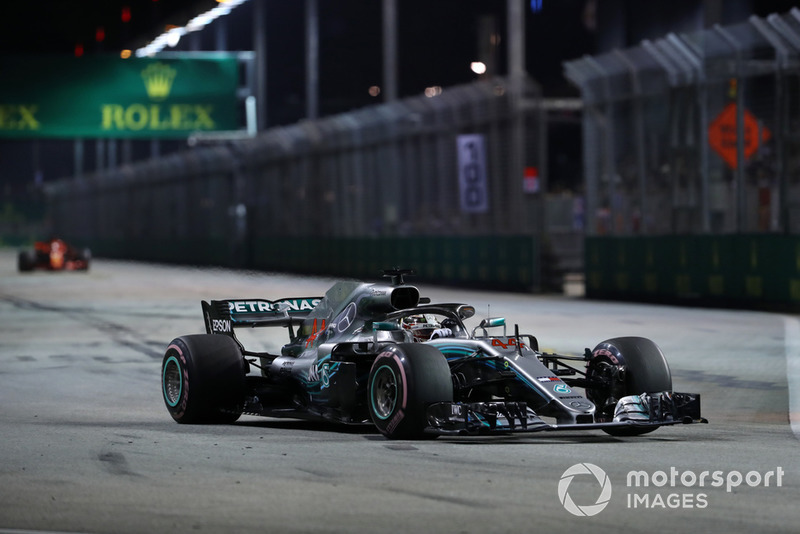 Perez apologised but it's not over, says Ocon